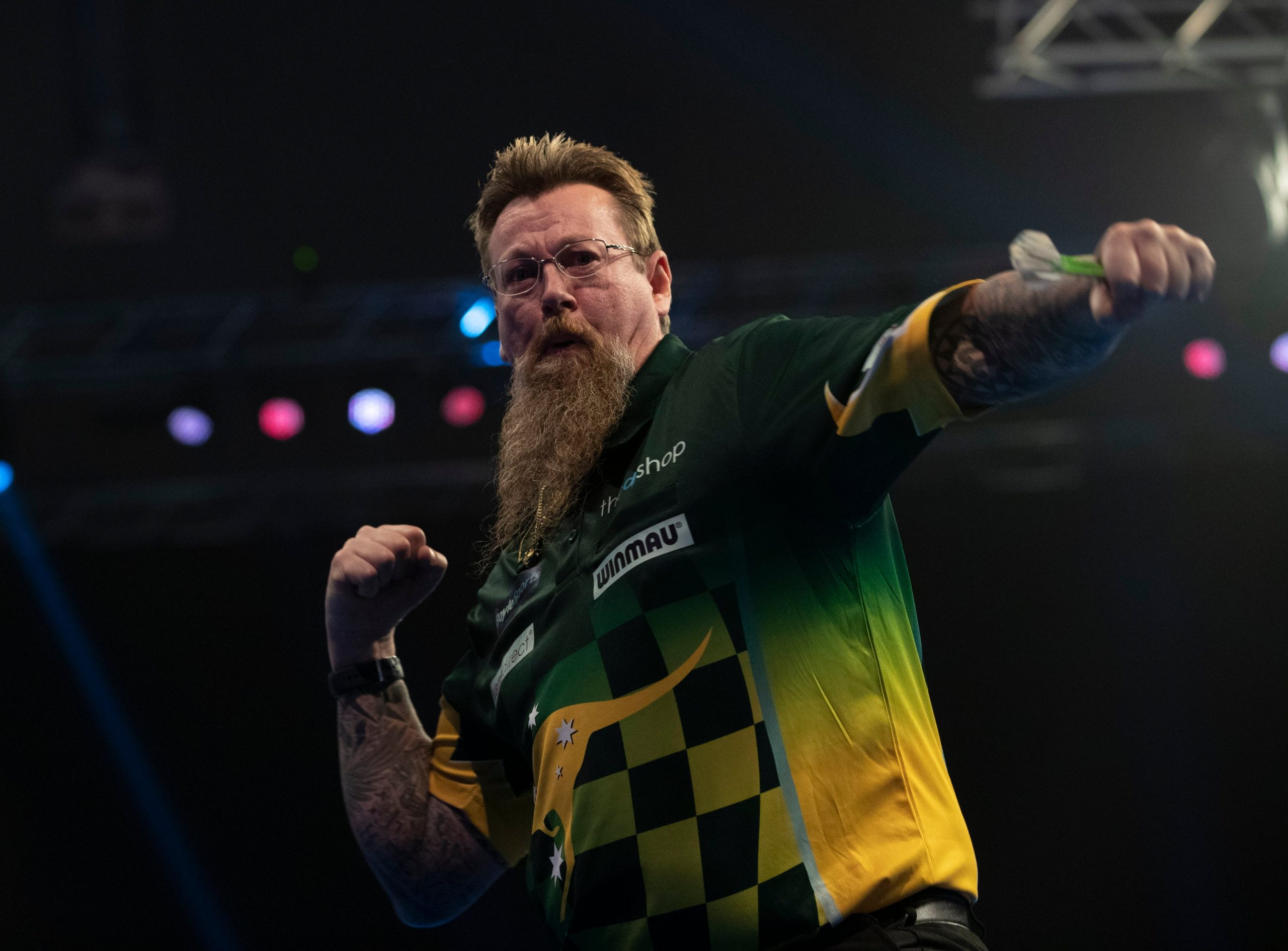 Simon Whitlock survived eight match darts from Michael van Gerwen to win 16-15 on a thrilling day of Grand Slam quarter-finals at the Ricoh Arena in Coventry.

‘The Wizard’ didn’t lead at all until the end of the match and managed to stay with Van Gerwen courtesy of a record Grand Slam haul of 20 180s.

All four matches went to at least 29 legs and were high in quality throughout as James Wade, Dimitri Van den Bergh and José de Sousa also moved through to the last four.

Day seven of the tournament began with a repeat of the Group C clash between De Sousa and Michael Smith.

The Portuguese got off to a better start than ‘Bullyboy’ and led 4-1 at the first break before a sublime spell of scoring looked to have sealed three more legs in rapid fashion.

However, he missed a big number and failed to take out 50 in two visits, allowing Smith to make it 6-2.

That didn’t seem to affect him as the huge scoring continued in the next two legs to send ‘The Special One’ into the second break leading by eight legs to two.

Those few minutes sparked something in St Helens thrower Smith as he took all five legs in the next session, including one in just 11 darts.

The former world finalist kept that form up and was hitting 180s for fun, emerging into the lead for the first time at 10-9. The players continued to exchange legs, and Smith took out 129 to make it 13-13.

He missed the bull for another ton-plus finish in the next, which was punished, before taking out 71 to level up once more.

It was a match of many missed doubles, and Smith’s tally ended at 33 as he missed three clear at double 12 to take it to a decider.

De Sousa took out 47 to complete a fantastic 16-14 win and book a first ever televised semi-final.

The afternoon’s other match was also a repeat of a group-stage clash, this one between James Wade and Damon Heta.

‘The Machine’ started excellently, winning the first four legs, but Heta wasn’t to be deterred as he found his form just in time to win the next three.

Both players were proving very strong on their own throw as a spell of seven straight holds in the middle of the match made it 9-6 to Wade.

He found an elusive break after ‘The Heat’ missed two at double, but couldn’t take advantage as the Australian got back within two thanks to a 142 checkout.

Heta closed the gap once more at 11-10, and we started to see how much a game can change in the best-of-31 format as breaks of throw began to be the pattern.

There were five straight at one point that took the scoreline to 13-12 to Wade, a run which Brisbane Master Heta broke with a 101 checkout.

Wade hadn’t done much wrong to be pegged back, and showed his class with three straight legs to seal the match and continue his incredible checkout rate of more than 50% for the tournament.

Form man Dimitri Van den Bergh took on Nathan Aspinall in another match that had already been played this week.

The Belgian didn’t find the levels which saw him get to this stage without breaking sweat, and Aspinall was taking full advantage, winning all of the first three sessions by the odd leg to lead 9-6.

Van den Bergh managed to turn the tide in the fourth, taking it narrowly before two consecutive legs after the final break levelled things up at 11-11.

Legs of 13 and 11 darts established a two-leg lead for ‘The Dream Maker’, but a clutch 72 checkout got Aspinall back on terms in another enthralling contest.

It went all the way to a decider, and the World Matchplay champion took out double 18 to win a classic and show that he can win in a different way to how he had been so far in the event.

The fourth and final quarter-final saw Simon Whitlock take on Michael van Gerwen on TV for the third time this year, looking to make it three wins from three.

Back-to-back three-figure outshots from Whitlock stemmed the tide in the early running, but ‘Mighty Mike’ established a narrow advantage at 6-4 after the first two sessions.

It looked like the Dutchman was starting to stretch his legs when he won three consecutive legs to lead 9-5.

He kept the Australian at arm’s length until the final stages when Whitlock squared the match up at 12-12, only for Van Gerwen to land a seemingly crucial blow with a 146 checkout to break and go within one.

He squandered three darts to win 16-13, and ‘The Wizard’ hit a 180 to each of the last three legs to break the record and unbelievably come from behind to win, after Van Gerwen couldn’t take out 68 in two visits.

Whitlock won a Grand Slam quarter-final at the fourth attempt and it means there will be a new name on the Eric Bristow Trophy come Tuesday evening.

It’s also a blow for MVG in his bid to remain world number one at the end of the season, with Peter Wright still £76,250 ahead of him.

The race is likely to come down to the World Championship, but that defeat for Van Gerwen will take some mental strength to get over after being in such a strong position.

It was a simply sensational day of darts, and there are two more best-of-31s on Monday as the semi-finals take place in Coventry.