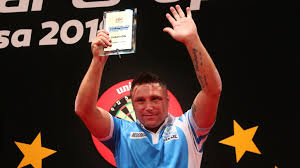 Gerwyn Price roared back from 5-3 down to defeat Rob Cross 8-6, retaining his International Darts Open crown at the Sachsenarena in Riesa.

“The Iceman” was cool all day under pressure, coming through four matches to win the title and pocket the £25,000 first prize.

The Welshman’s day began in the last 16, where he repelled the plucky challenge of Joe Murnan with a 6-4 win. He repeated this scoreline to move into the semi finals, seeing off UK Open Champion, Nathan Aspinall.

A last four showdown with Glen Durrant awaited Price, with the two sharing some high class matches over the last few weeks on tour.

This time “Duzza” was no match for Price, as Gerwyn reeled off four straight legs from 3-3, averaging 102 for a 7-3 victory to move into the final.

Rob Cross again agonisingly ran out of steam at the vital moment, after a bulldozing run to the final. He began his day with a 6-0 rout of last week’s Austrian Open Champion, Joe Cullen, and then inflicted a 6-1 defeat on Richard North to move into the semi’s.

After a titanic tussle with Peter Wright, Cross clinched three of the final four legs to egde out the Scot, 7-6.

Price’s last dart in hand finishes proved pivotal in the final, as, from 5-3 down, he took the next three legs to establish a lead. an 88 finish put Price 7-6 up, and a 108 finish sealed the deal, as he made in back to back titles in Germany.

“It’s the first time I’ve defended a title, so I’m over the moon,” Price explained in his post match interview.

“Every game is like that (versus Cross) for me now and when I play people like Glen and the top players in the world like Rob, it’s never going to be easy. I’m happy to get over the winning line.

“I had three weeks off and after the break I wasn’t very confident – I changed my darts, had a new set of darts and it seemed to work for me.

“I usually start pretty well at the beginning of the year and then taper off, hopefully that’s a bit different this year. I’m a bit more confident now after winning this one.

“Maybe [I’ll have] a weekend off next week and then I can look forward to Gibraltar and the rest of the year.”

This sets up the back end of the year nicely for Price, with a defence of his Grand Slam title upcoming in the next few months.

Glen Durrant enjoyed another strong showing by reaching the semi finals in Riesa. The Teessider ousted home qualifier, Michael Rosenauer 6-3 to start his day, and then knocked out Daryl Gurney 6-4 in a high quality affair, before falling to eventual champion Price.

Adrian Lewis is steadily getting back to some kind of previous form, reaching the quarter finals before Peter Wright blitzed him 6-0.

There was also a quarter final appearance for Richard North, in his first EuroTour appearance of 2019. North came from 5-2 down to defeat Boris Koltsov 6-5 in round one, before stunning the number one seed, Ian White by the same scoreline to reach the last 16. “The Lionheart” again dodged a bullet to reach the quarters, surviving a match dart from Steve West to edge another decider, before Rob Cross finally ended his run with a 6-1 win.