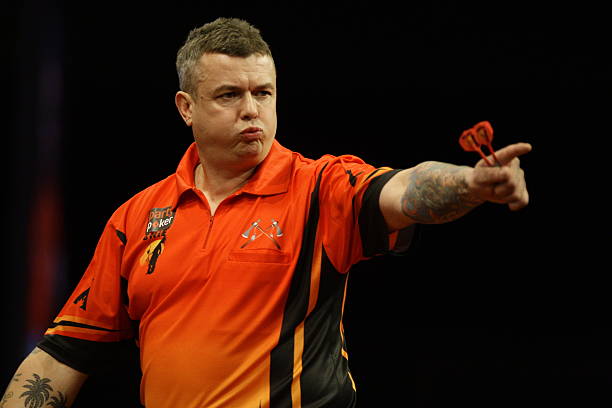 We are so lucky to have ‘The Chief’ Colin McGarry with us for his first interview with DartsPlanet.tv

He is a multiple time winner of NIDO comps, the BDO NI Open, Tom Kirby Memorial, played in the PDC Grand slam of Darts, World Masters, PDC Worlds and has many many Internationals Caps. He is truly a legend in the NI Darting circuit.

Thanks so much for agreeing to our interview. Our readers are so keen to hear you.  Some might not know that you are proficient in most sports including golf, but how did you start throwing darts?

At age 14 after watching my dad playing darts and getting a yellow and black dartboard from Santa.

Eric Bristow and Phil Taylor. Phil Taylor who gave me a set of his phase 1 darts at an exhibition. He said I had a great style and throw.

What was your first big competition win?

Probably the Larne league Individuals when I was 18 which gave me the bug and desire to win more and practise.

Again you’ve won another NIDO major this year (NI GOLD CUP) and made the final at the NIDO Individuals. How do you keep going?

Well as you mentioned I play golf to a good standard at a +1 handicap.  It has meant my year was divided in two parts – summer for golf and winter for darts. So I put a lot into the two sports, so I didn’t get burned out at darts.  Over the years I set myself goals and in darts I’ve made most of them. There is one more to go and I’d say that will be me. My dad always said don’t play golf, stick to darts your good enough to make it, but I love them both.

I love stage play. It brings the best out of me. You must have skill obviously, but you need to be dedicated to get something out of it.

How would you practice for a tournament – do you have a set routine – could you share some of that with our readers?

What do you do to relax in a match?

I’m not worried who I play, just do your thing and you’ll be fine.

Soft Tip darts seems to be getting some traction now in Europe and with the main manufacturers such as Target bringing out their own brand (Nexus). Would you ever be interested in trying your hand at Soft Tip?

Not for me mate. I’m a traditionalist.

With the advent of the JDC and Academies popping up everywhere in England and now even in Dublin, would you ever think about coaching the youth coming through here in NI – you do have a lot of skills that you could pass on.

Northern Ireland darts are a bit behind the home nations in this area. Not of a lot of young ones coming through in my opinion. But the Republic have some smashing youngsters in their system who I think will make it.

Do you have any message to our readers or anything else you want to specially mention?

Obviously my wife and family and my daughter for passing her driving test and taking me to places for darts. She’s my number 1 supporter. My dad for my controlled aggression lol. My mum for never giving up and proving the haters wrong.  And my mate for giving me my nickname – ‘The Chief’. Lastly for American golf for giving me my ‘Boooom baby’ roar (American golfer Jeff Overton shouted “booom baby” when he holed his 2nd in Wales at the Ryder Cup)

Thanks a lot for doing the interview with us today. One of the nicest guys on the NI darts circuit, a gentleman who I respect. We will see you on the oche during the year… BOOM Baby.