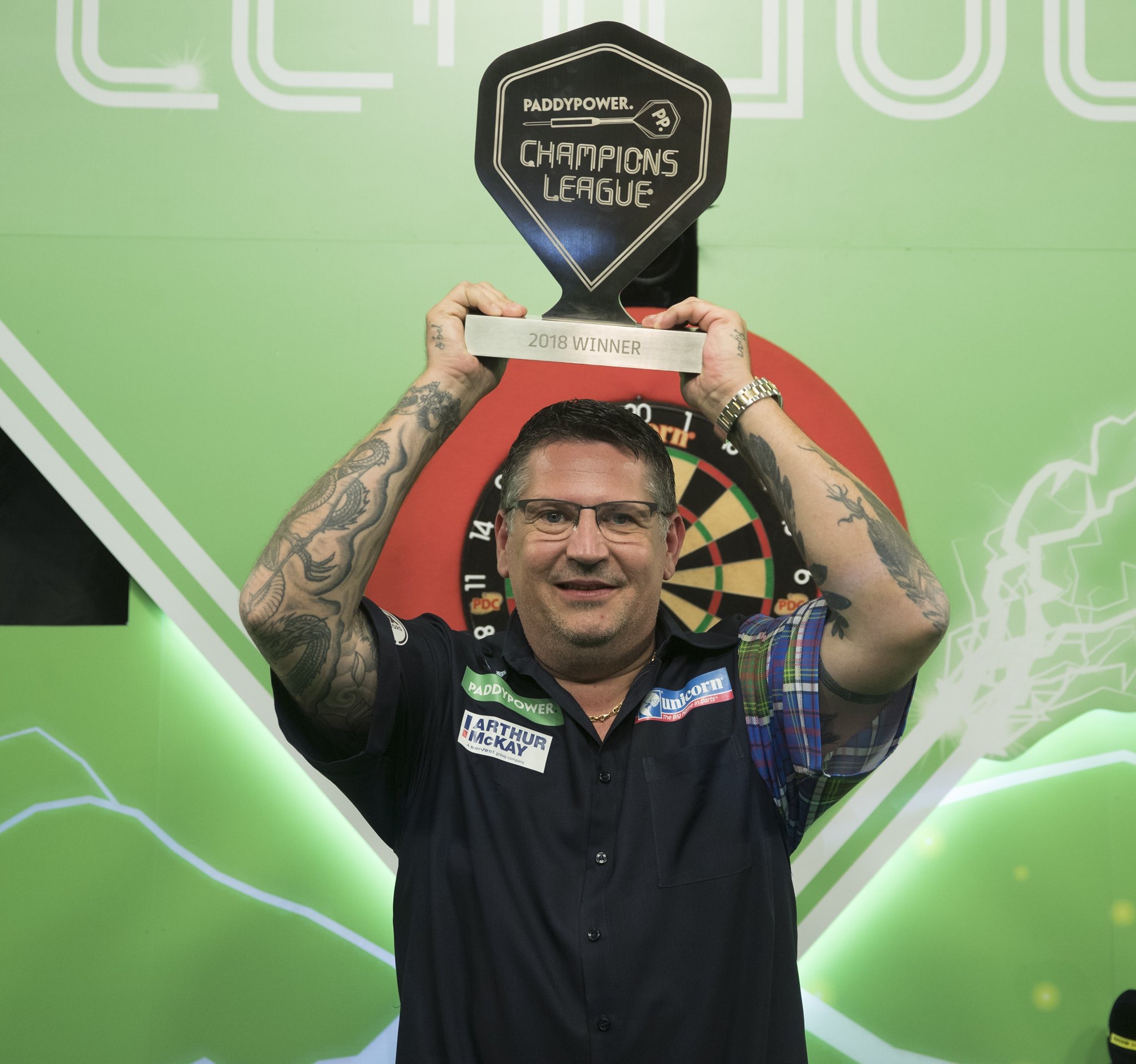 1. Well Gary, first well done on winning the Champions League Of Darts at the weekend, recording brilliant Victories over Michael Van Gerwen in the Semi Final and Peter Wright in the final, and a superb 140 checkout to make it to the Semi Final after Van Gerwen missed 2 darts to win, how did you feel after all that Gary?

Many thanks Carter.
It felt great winning. I’d really struggled with my back again that weekend but all of a sudden on stage I forgot the pain. I love playing MvG, we really bring the best out of each other, we just get on stage and throw darts and the best man of the night wins. And the Peter game was great too, but I knew the Trophy was mine.

2. You now hold the UK Open, World Matchplay and now the Champions League Of Darts titles, do you think you can add more titles this year?

I take each game as it comes. Of course I would like to win more Titles- but there are a lot of games to be played before a Final.

3. How difficult is it to put in a lot of time and travel week in week out on the Tour? It’s obviously the same for all the top players, and it comes with being in the World’s Top 4 etc, but missing out on family time also?

It’s very difficult. People think we have an easy life but it’s very tiring. Without doing the Euro Tours I’ll still be away over 200days this year between tournaments and travelling. For the World Series we’re away 3 or 4 weeks at a time. When the Premier League is on it’s be there on a Wednesday, play on a Thurs, Travel to ET or Players Champs on a Friday, Play Sat –Sunday, travel home Monday, see your family Tuesday and start again on the Wednesday.
It[‘s difficult having that much time away from your family. It was great when Tai was wee and we could take him, but he’s at school now. I really miss him and Cheylea (& Rachel of course)

4. What do you think of the PDC’s decision to expand the World Championship Field to 96 Players and introducing 2 Female Players?

I’ve been asked this a lot lately. The PDC have made a decision that they think is right. But, there are no female PDC Tour card holders and no women entered Q school this year.

5. Do you think you will ever be commentating on TV when you finally decide to Retire?

Would anyone want me? I could maybe give it a go, but I might be too honest for tv.

6. Which player has stood out to you this year on the PDC Tour? (Obviously not yourself lol)

Ooft a hard question. We’ve had so many surprises this year. The standard of players just gets better and better.

7. You are Currently ranked Number 4 in the world Gary, do you think you will get back to number 2 at the end of this year?

8. What do you think of Michael Smith’s brilliant form this year, Reaching the Premier League Final, winning a World Series Event and winning 2 Pro Tour Titles?

Michael has been fantastic. He had a wee bad spell, a blip in the past. But now he’s focused and settled and his self belief is back- and it shows. He’s a superb player but sometimes he forgets.
Don’t tell him I said nice things about him though, he’ll get a big head. I tell him he’s rubbish J

9. Lastly Gary have you any advice for young players like myself, I’m 14 years of age and I look up to you?

I started much later than you playing. I was in my 20s and I had a job so was used to the hard graft of getting up and working all day and I know the value of a pound note from that. I think the problem with a lot of young players is that they’ve never had to do a hard days work – but the top players have- MvG/Cross/Gurney all have trades, which is a great thing, they’re at the top, but if they hadn’t got there they had something to fall back on.

Main advice – don’t think darts is easy, it isn’t, it’s hard. Stick in at school and have some skills that can carry you through until you’re at the Top. Darts is also expensive so a job takes pressure off the money worries.
A good honest Manager is a great asset and takes so much pressure off you. Tommy has been in Sports Management for over 40years so he knows all the ins and outs and is 100% honest, but not everyone is like him, so be savvy. Tommy and Stephanie are a great support for me and the rest of the boys, and we’re adding new players to the team all the time so others realise how professional they are.

The eternal struggle with darts nerves

My Visit To Sudbury Youth Darts Academy – What An Amazing Day