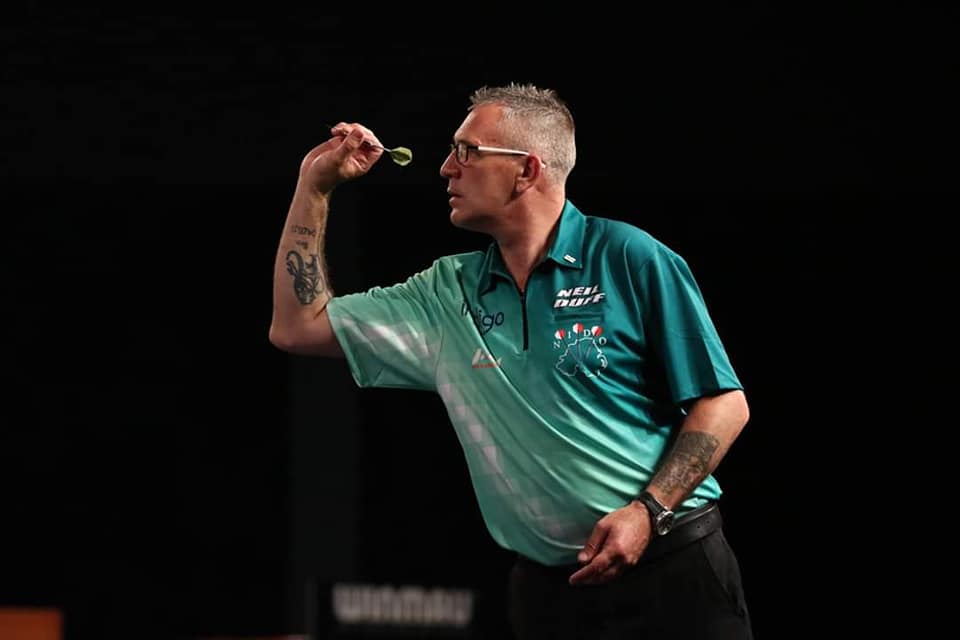 This week I was lucky enough to have an interview with Northern Ireland dart player Neil Duff. Duff from Ballyclare, County Antrim has had a prolific last few years locally and in the NIDO and is one of the men to avoid in the draw in any competition.

Neil Duff recently a runner up at the singles event at the Six Nations losing to Jim Williams is aiming for more success for the rest of the year.

Here is our interview:

We know you are an NI International and County player for Area 2, but how did you start throwing darts?

I started throwing late. I was 30 and started throwing for craic with my dad at his house. Enjoyed that and joined his team in the Ballyclare Darts League. Took a while for my 1st win though.

I’ve always looked up to my dad and always will. I served my time as a joiner under him when I left school. In darts I’ve always been inspired by the great Northern Ireland players like Geoff Wylie, John and Brian Elder and Brian Cathcart. They were the top men when I joined them at area 2 years ago.

What was your first big competition win and who was it against?

Not really sure when I first recorded a big win. Possibly beating Paul Brown in the Northern Ireland Individuals. He was a big favourite to win it that year.

You have done well this year on the NIDO Counties finishing 2nd in the overall averages – how do you keep going, keep interested, what do you do in your spare time?

Yeah I’ve had a good season, I have fire in my belly and enjoying playing again. Look a time out as sometimes playing as often as I do can become a strain but since I came back I’ve upped my game and I want to win everything.

Recently you’ve been selected for the NI Player for the Rep/NI friendly and played in the six nations and Celtic cup. How do you feel going into the friendly? What are our chances?

International matches are all on the day, especially the big teams 12/15 man teams. But a great bunch of throwers and the best manager in big Gareth chambers we will go in with a winning attitude.

Will the friendly be streamed, so our viewers can watch?

And yeah it will be stream with the ever present and professional Mark McEvoy. But we would rather see you all in Bellinis Newry to watch live and soak up the atmosphere.

Playing on a big stage is always daunting. The lights, cameras etc. But the more often you do it the buzz just fuels you to do it more and more. Really it’s all about focusing on  winning and blocking out everything else. I love it.

How would you practice for a competition – do you have a set routine – could you share some of that with our readers?

Everyone’s practice and preparation differs. Personally I like a couple of hours every night but on matches a twenty minute warm up to loosen the arm does me. In my opinion for any darter 201 double in/out is perfect for working round the dartboard and 3 dart combination outshots become second nature .

Any tips of the trade – What do you do to relax in a match?

Darts is all about focus if u can just relax into a game and not get caught up playing the player. I don’t watch what the opponent hits. For me it’s all about what I do.

We know you have recently changed darts, can you explain the reasons why and how do you like the feel of them. What darts do you use – flights, stems and barrel.

I’m not a big changer of darts to be honest. I went to Daryl Gurney’s darts but I thought they lost their grip after a while so moved on to Raymond van Barneveld 95s. The grip is fantastic and well balanced. When I moved to the 2nd generation RVBs I tried the thin reflex points and love them but they are a nightmare for markers and referees as I was well informed at the 6 nations.

What do you think was your best result / performance to start you off again in your recent return to darts?

I think the county game in December was the turning point in my recent improvements. Banging in a 100+ average boosts the confidence.

After winning the recent Coleraine and Broughshane Opens against stiff competition, what are your aspirations for the rest of the year?

Yeah I’ve had few good wins in competitions lately which keeps the reputation up and after taking big scalps, it keeps me dangerous. Now it’s time to push it up a notch and try to pick up a sponsor. PDC Q School is the main objective in the near future.

Will you be at the World Masters qualifiers this year?

Yes I’ll be at the World Masters this year. I have always had good runs in it. Just wish the BDO would confirm where the venue will be. Seems to be later every year, which makes it more expensive for travelling to the mainland.

Who should we look out for new or returning players on the local NIDO circuit next season?

There will always be a top 16/32 local lads you know won’t be far away every season. Kyle McKinstry is playing well and Alan McKnight has stepped up to be counted. The returning Barry Copeland from Area 9 will be a force to be reckoned with and it’s great to see him back. Plus young Josh Rock is my bet to do big things next season. He has moved to area 2D and had a great run at the annual Clough Rangers darts competition.

Do you think the NIDO Classic was a good change to three divisions last season?

This years NIDO Classic was in theory a great idea. The NIDO are doing a great job and are in great shape. My only down point is that I think there should be no majors outside of the county season. But that should be rectified in the upcoming season.

Will you be staying with Area 2 next season, or do you have any other plans?

I’ll be at Area 2 for as long as they will have me. Great bunch of lads!

Will you trying more on the BDO circuit next season?

I’m hoping to try a move to the PDC in January. For the rest of 2019 I have the World Masters, the Northern Ireland Open and the day after it finishes flying out to Romania for the WDF World Cup so I might squeeze one or two BDO opens in.

How do you think our local players compare to the English, Welsh and Scottish?

Northern Ireland darts are unbelievably competitive and at a really high standard. We have proved we can stand against any team. Maybe if anything we give teams too much respect but standard wise we are very much as good as anyone.

Do you have any message to our readers or anything else you want to specially mention?

I’ll not single out anyone, but a thank you to the people that travel with and support me whether it’s in person or via social media. Hopefully I can pick up a sponsor and do you all proud.

Many thanks for your interview Neil. All the best for the rest of the year with your darts. Keep them straight!