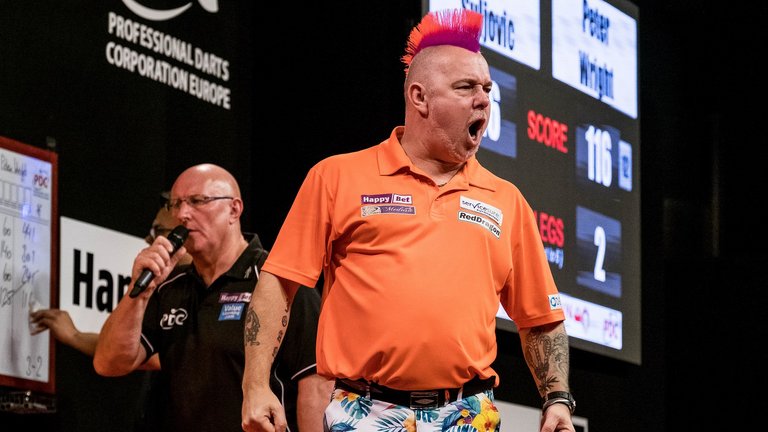 Peter Wright had a fantastic run at the opening European Tour event of the year after an appalling start to 2018 – which has left ‘Snakebite’ in the relegation zone of the Unibet Premier League.

Wright became the first ever player to suffer back-to-back-to-back 7-1 Premier League defeats on Thursday evening when he was thrashed by five-time World Champion Raymond Van Barneveld.

But, after a huge struggle Wright found some form this weekend after switching back to his Red Dragon Euro 11 darts which are the darts that suit him best.

‘Snakebite’ began a terrific weekend with a 6-2 win over Luke Woodhouse before sending John Henderson to the airport, beating his fellow Scotsman 6-2 also.

The evening session then began and Wright averaged just below the 100 mark for the first time in the three games he had played but it was enough to beat Joe Cullen quite convincingly 6-3.

Wright would face an inform James Wade – who had averaged over 105 in his last 16 encounter with Michael Smith – but it was the Suffolk-based ace who came out victorious once again as he booked his place in the final and a repeat of last year’s European Tour One final between the world’s best two darting sensations.

Wright produced some fantastic stats in his semi-final averaging just over 102 and hit seven out of eight darts at double. The former UK Open champion also reeled in the big fish in his match with James Wade.

The final was a stunning showing with the game going all the way to a last leg decider. Wright led 5-1 in the tie but Van Gerwen did what he does best and averaged 110 from the seventh leg onwards and eventually snatched the title off Peter Wright.

After missing the bullseye to take the title and win his seventh European Tour title Wright told Elmar Palker – our MC on the European Tour, “I’ve been struggling big time, and to take seven legs off Michael van Gerwen – the best player there is at the moment – that makes me very happy.

“I thought the bullseye was going, I was ready to shake his hand but it wasn’t to be.”

Wright finished the tournament with an overall tournament average of 100.91, a double percentage of 50% (32/64) and 13 maximums – three behind 180 leader Ron Meulenkamp.

Is Darts a Sport?