Smith, Cullen & Petersen join Paul & Steve on this weeks ‘Behind the Bar’

Eric Bristow & Paul share their thoughts of The World Matchplay

Colin ‘Jaws’ Lloyd joins Paul on this weeks ‘Behind the Bar’ 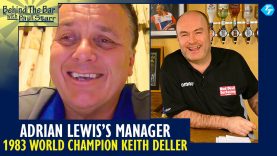 Jackpot’s Manager & 1983 World Champion’ Keith Deller on the second half of this week’s ‘Behind the Bar with Paul Starr on Tungsten Tales (Sponsored by Winmau).

In this part of the show Keith Deller keeps Paul up to date on Adrian’s practice before this week’s Premier League Darts in Newcastle. Keith also explains his important behind the scene role at the PDC.

Behind the Bar with Paul Starr is sponsored by William Hill ‘The Proud sponsors of the World Darts Championship’.