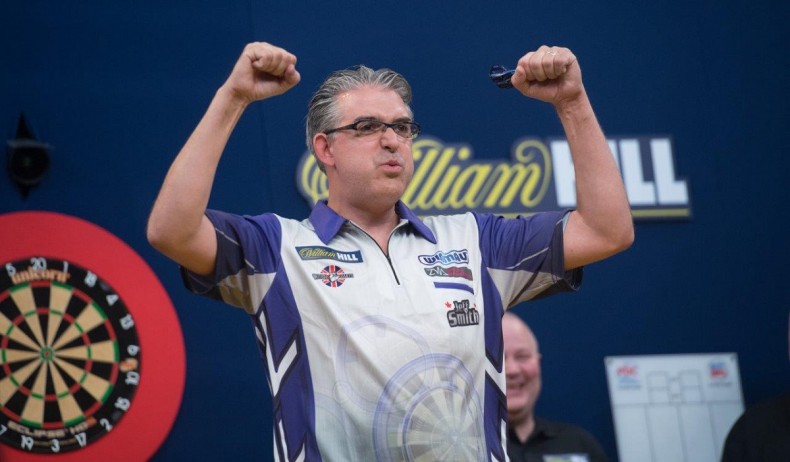 Q01. “Congratulations Jeff on your recent pairs win with fellow Canadian David Cameron at the WDF World Cup of Darts. You beat the English pair of Scott Mitchell and Daniel Day 6-2 in the Final. What was it like to achieve that winning feeling in Romania?”

“It was great to get a win, thank you. We are very happy with that and it was a gold medal for Canada for the first time in thirty years for that title. Like I said, very happy to get the win but more than anything, myself and David were happy on the level of play in which we achieved it. It was fantastic to pick up that gold medal.”

Q02. “Canadian darts seems to be on the up recently, with players such as yourself, David (Cameron), Jim Long and the 23yo Dawson Murschell who is plying his trade in the PDC. Is the future bright across the Atlantic?”

“The future is very bright, in Canada and the US there a lot of tournaments to play, tons of great competitions and it all comes down to the opportunities that we have now with the BDO. Obviously if you’re good enough then you can head over to Q-School and play in the PDC. Other tours like the CDC, NDFC and the ADO, they have lots of options for us to play. There a few key players that you have mentioned and there are probably another ten guys that could make that list.”

Q03. “With twenty-four tournament wins, mostly in North America, including the Canadian Open ‘14, Las Vegas Open ‘15 and the PDC North American Championship ‘18, will you be hoping to secure success in the UK and Europe in the near future?”

“Yes, it’s good to have tournament wins on your home turf but for the remainder of 2019 I’ll be looking to hit the UK a lot more than I did last year. We had some issues with the wife’s health but everything has been straightened out now. It should be good and I am looking forward to Q-School in 2020.”

Q04. “In 2015, you reached the Semi-Final of the BDO World Championships, succumbing to Scott Mitchell 0-6, who became the victor by beating Martin Adams in a classic 7-6 win. What positives did you take from the event having beaten Mike Day in the qualifiers, followed by wins against Wesley Harms, Gary Robson and Robbie Green ?”

“Yes, 2015 at the Lakeside was definitely a memorable year for me. I had to come through the BDO qualifiers to get in there. I started my knock-outs probably eight rounds earlier than that World Championship and I really didn’t know what to expect playing on that size of stage at any point in my career. You are always going to wonder how you will turn out and also how the fans are going to react, for me, every game that I seemed to get involved in and win, I gained more and more fans as I progressed. Lakeside was phenomenal in that sense and to beat players like Wesley, Gary and Robbie, who was the actual favourite at that point was again, phenomenal. Scott was another great player. I struggled with his pace that year and since then I have had a couple of wins against him. You take your positives and you learn from your mistakes and keep pushing forward.”

Q05. “In 2016, you went one stage further having reached the Final against Scott Waites. You enjoyed a great win against Martin Adams in R1, winning 3-0. Also a thrilling 6-5 victory versus Richard Veenstra in the Semi-Final. Was the 1-7 defeat in that Final harder to take than the previous years’ escapades to having come so close to being a BDO World Champion?”

“2016 was probably the World Championship that I should have won. I was playing great darts at the time and I kicked off the campaign with a big win against Martin, obviously he is a very tough player to get through and the Semi-Final with Richard was amazing as it went right down to the wire and it was a good game to watch and a great game to be a part of. That 7-1, that one hurt. Myself and Richard were the last game on the previous night and I had to do television interviews afterwards and I just couldn’t get to sleep that night. I think I had a couple of hours sleep and it definitely affected my energy levels going into that Final. It’s a learning curve and a learning process and who knows, what’s not to say that I can’t go on to bigger and better titles. Looking forward to it.”

Q06. “John Part, Canada’s most successful darts player of all time, having been the World Champion three times, BDO in ‘94 and the PDC in ‘03 & ‘08. Was he a figure that you looked up to in your darting career when you first joined the BDO in 2002 ?”

“Absolutely, John Part is definitely Canada’s best ever player and there are no ifs or buts about it. We also had some other leading lights, names like Bob Sinnaeve and Eve Chamberlain back in the day too. I took a lot of knowledge from those guys and just the way that they handled themselves and when they took to the stage knowing that they could win instead of just being happy to play in England. John (Part) was phenomenal for me, he helped me and gave me good advice and he took me out and we practised together. How can you not look up to what he has done in his career.”

Q07. “From your victory in Romania, the 46th BDO World Masters take place at the end of October. What practice rituals does “The Silencer” use with your new Winmau 21g Signature darts and how do you prepare?”

“The L-Style World Masters will be held at the Gray’s Hall and the Finals will be held at the Circus Tavern this year. As for practice routines, nothing has changed really in the past eight years and it’s pretty much all about finishing. I always mix it up with three or four different practice games, 121’s, hybrid 121’s where you go up by five or ten. The biggest one on my list is that I will throw sixteen or twenty-four random numbers and I won’t finish my practice until I have taken everything out. I’m looking forward to it and the new 21g darts have been working better than ever. I find that with the slightly slimmer barrel I have been picking up my scoring which has been my downfall. My finishing has been my claim to fame over here in England. Hopefully we will have a good tournament this weekend.”

Q08. ”Born 6th November 1975, St. John in New Brunswick, Canada, how did darts enter your life with a country enriched in Ice Hockey, Lacrosse and Curling ?”

“I was fortunate when it came to darts as my family all played darts, they weren’t playing competitively by any means but they eventually played local leagues but it was my Grandfather who got me into it an early age, he took me to youth darts from the age of twelve and I played in my first provincial event when I was fourteen and I went on and won every year whilst playing in the youth. Mind you, I didn’t win at National level for the youth but I definitely gained a lot of experience through that. I had my other options and I played Ice Hockey and when it came down to playing High School hockey or darts, I was told to make a selection if I was available to play as a goal-tender in Hockey or to play darts. As they say, the rest is history.”

Q09. “Not many people realize that you “starred” in the 2016 feature film directed by Tim Burton entitled, “Miss Peregrine’s Home For Peculiar Children.” Please explain.”

“Yes, that film was a kind of unexpected message that I received on Twitter from the movie company asking if they could get the rights from that clip from when myself and Scott Mitchell played in that 2015 Semi-Final. I thought it was a hoax at first but I did reply back and they asked for my email address and they sent the information forms through and we made an agreement that they had to send me a copy of the movie which they did. If you haven’t seen it, it is a good movie and it’s a “starring” role. So make sure you take notice as it lasts for three seconds.”

Q10. “What can expect from the 43yo “Silencer” for the rest of 2019 and beyond ? There will obviously be a lot of trudging through airports and checking in baggage no doubt ?”

“The rest of 2019, obviously the World Masters and possibly get into the World Championships for the BDO in 2020. I came excruciatingly close to getting back to the “Ally Pally” with the North American Championship and unfortunately I had a call out as I was going for the bullseye to win but that stuff happens in darts I guess. From there, it’s going to be Q-School in 2020, I haven’t decided yet whether I’m going to go back to Germany or heading back to Wigan, which I did enjoy the year before, more than Germany the year before. I find that the set-ups and the way that it is run is more professional in Wigan. If you’re planning on being in the top 128 then you have to be able to get through either one of those. I’ll have to put my head down and go to work, with lots of practice and I’ll be hitting as many tournaments as I can in the future. Also a big, big thank you to my sponsors Winmau, British Darts, Phoenix Sports and Apparel and my management company, ZWA Sports who have given their invaluable help over the years.”