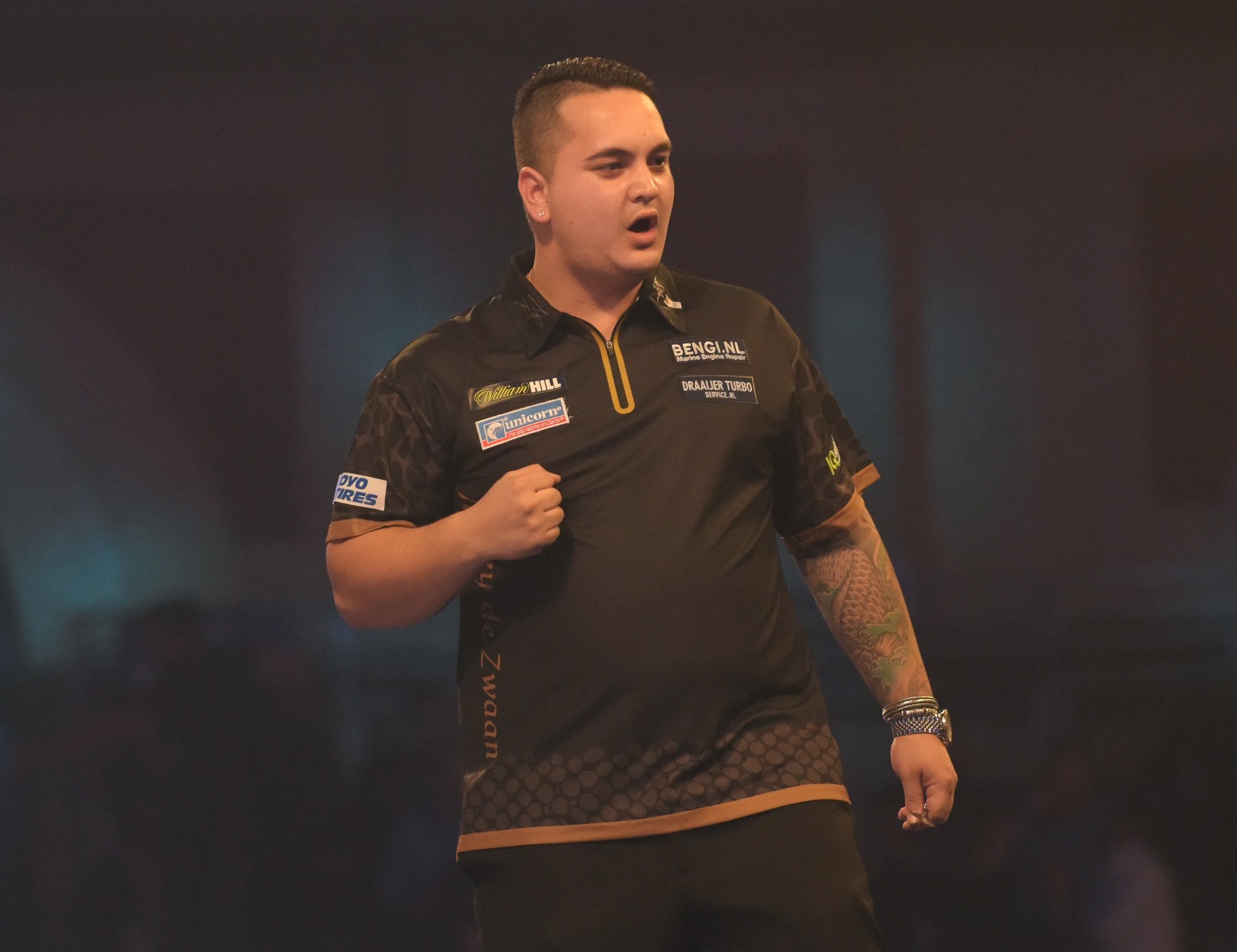 Jeffrey de Zwaan lit up the World Darts Championship with a stunning performance on the final day at Alexandra Palace before the Christmas break.

Earlier, in the afternoon session, Luke Humphries (94.80) continued his remarkable run at the tournament with a classy performance against fellow unseeded player Nico Kurz (96.16).

There was nothing to separate the players after four sets with the match finely poised at 2-2.

German youngster Kurz missed a 170 bullseye and a dart at D20 for the fifth set before Humphries punished him, finding D1 in the deciding leg to go within one set of victory.

The Englishman found an early break in the next set and finished the job, holding throw twice to seal a place in round four against Kim Huybrechts.

It was 180s and ton-plus finishes galore in a scintillating Alexandra Palace classic between Adrian Lewis (93.74) and Darren Webster (92.40).

Lewis had the fifth set in his grasp, but Webster took out 140 with two D20s against the darts and proceeded to hold throw and take the set.

A sparkling sixth set saw finishes of 132 and 124 from Jackpot as well as 142 from Webster, who also missed D12 for a dramatic nine-darter. However, Lewis made no mistake on throw and pinned D16 to force a deciding set.

Thirteenth seed Lewis came out on top in a tense final set. The players could not be split after four legs, but Lewis found a crucial break of throw in the fifth leg before holding his nerve in the following leg.

It was agony for Darren Webster who had four ton-plus finishes.

There were more big checkouts in the final match of the afternoon, which ended in a win for Dimitri Van den Bergh (94.21) over Luke Woodhouse (90.21).

Woodhouse, who dumped out Michael Smith in the second round, halved the deficit but Van den Bergh restored his cushion by winning the fourth set.

Despite reportedly playing with illness, ‘Woody’ reduced the deficit again as Van den Bergh squandered opportunities to close out the match.

The Belgian would not be denied though, taking out 86 in the deciding leg of the sixth set to book a tie with Adrian Lewis.

In the evening session, Jeffrey de Zwaan (106.09) recorded the highest average at this year’s tournament in an entertaining victory over tenth seed Dave Chisnall (101.75).

It was dejavu from the earlier opening game and two sets apiece after four sets, with both players having strong and weak spells.

De Zwaan put himself firmly in the driving seat by winning the fifth set. Nevertheless, a stunning 161 from Chisnall in the sixth set looked to have marked a turnaround in his fortunes and took the match into a final set.

A relentless display in the deciding set from de Zwaan including a 10 dart leg saw the Dutchman record another excellent win on the big stage.

Despite ten maximums and an average over 100, Chisnall exits the tournament before Christmas. De Zwaan will look forward to a tie against Peter Wright in the last 16.

Gary Anderson (99.85) recovered from the brink of defeat to beat Ryan Searle (95.15) in another marathon encounter.

The opening sets went according to throw with Searle settling in well.

He pummelled eight 180s in the first three sets before storming to a 3-1 lead.

But the Flying Scotsman rediscovered his mojo and drew level with 100+ averages in the fifth and sixth sets.

Anderson completed his comeback with a straight-legs victory in the final set, securing a fourth round tie with Nathan Aspinall.

A sudden power cut at Ally Pally stalled proceedings for almost half an hour with many fans calling for Rob Cross to sort the problem out!

Snakebite took the lead before bizarrely changing his darts in the middle of the second set, which was followed by Asian ace Asada leveling the match at 1-1.

Wright raced to a 3-1 lead before missing a 170 bullseye to win the match. Asada made him pay by taking out 96 under pressure and reducing the deficit to one set.

The Scot would not be denied again, finishing an 84 on the bull to confirm a 4-2 win.

It’s an enticing tie with Jeffrey de Zwaan up next for Wright for a place in the quarter finals, who will likely have to perform better.

That is that from Alexandra Palace until after Christmas, with the action resuming on Friday December 27.