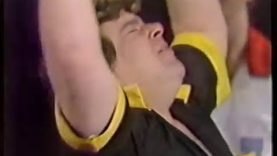 Some things in sport were so far from happening that nobody cares that they didn’t. Does anybody really grumble about Crewe Alexandra barely ever getting to the Fifth Round, let alone past it? I certainly don’t, love it though I would if they did.

Other things, were so close to happening, that it is hard to believe they didn’t. Even nearly 40 years on.

Two millimetres is all Jocky Wilson was away from changing the course of darting history. Although he came close a few times, the famous ninth dart miss against Keith Deller in the 1983 Embassy is to many older darts fans the greatest moment that never happened in this sport.

We have seen many other near misses on the double 12 – as it usually is – and even this year Simon Whitlock alone has threatened a few. Only, these days we are more used to it, televised matchplay spoils us with a dozen or so every year and nobody really recalls the ones that got away, not after a week or so. Unless it’s Paul Lim, of course. Can you remember all the legs this year which saw a player hit the first 8?

Anybody over 40 who has long followed darts can picture the defending champion Jocky Wilson’s famous close call, right from the first dart. We know he snatched the sixth, as he often did, and it just crept into the corner. We know he went treble 15 for double 18. Some of us can even still hear the commentator almost willing the final dart in, the pleading tone in his voice, ‘double 18…..’

This would have been the first televised perfect leg, and to this day may still be the most famous. Jocky Wilson was a hero of this sport, and remembered as fondly as any other player. We will never know what would have happened differently if he’d completed it. If…

If… The sports fan’s favourite word.

It doesn’t matter that he lost the game. He was soon back to winning ways and kept this up for another ten years or so. Even if he never managed to go one better, he became a darting legend, and quite rightly so.

We all love a nine-darter. Just watch the crowd when it happens, whoever throws it. And remember Freddie Flintoff literally losing it when MVG hit one? It doesn’t matter who wins, we love to see the perfect leg. Van Gerwen almost hit two in a row once and still lost the set. How many people remember that James Wade won the next leg therefore the set? It was a magic moment, which I can watch over and over again.

The 1983 moment that never came to pass would have been very high among not only Jocky Wilson’s finest moments, but those of the game in its entirety. One of the greatest players achieving the game’s greatest feat, first to do so on TV.

And every time I watch that leg of darts, I still expect the last one to go in. I will it into the bed, picture it landing, tense and excited.

But it never did, and it never will.