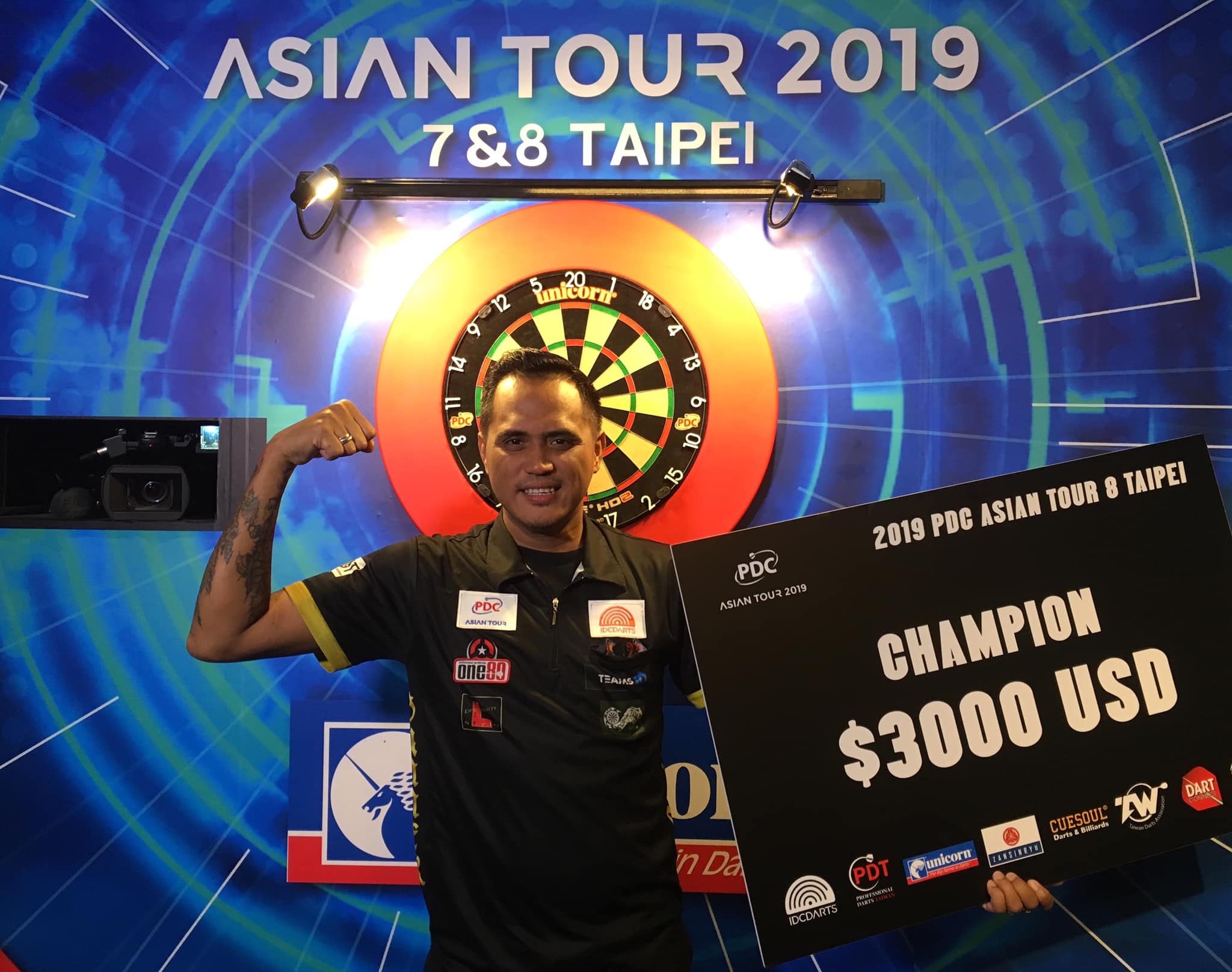 Lourence Ilagan incredibly made it three successive PDC Asian Tour titles as he denied his compatriot, Noel Malicdem, in the final of both events at the G Club in Taipei, Taiwan.

Ilagan, 41, was far from his best at the World Cup of Darts, but stormed to victory on Saturday in Taipei, averaging 110.3 in beating Noel Malicdem. The Filipino thrower completed the nine-dart leg during the final, just over a year after his opponent had hit the first ever on the Asian Tour.

‘The Gunner’, who was originally born in Manila but now lives in Cainta, drooped just three legs in reaching the semi-finals, seeing off Szu Chiang Chan, Vic Erwin Buling, Alexis Toylo and Thailand’s Attapol Eupakaree in a dominant display.

Melvin Kent Pelona was dispatched at the semi-final stage by Ilagan, before the Filipino denied Malicdem to clinch the title.

There were no 110 averages needed to win Asian Tour Eight for the 41-year-old. He enjoyed wins over Hideaki Inamura, India’s Nitin Kumar, Tokuyo Takayama, Teng Lieh Pupo and Seigo Asada en route to the final – where he came from behind to narrowly beat Malicdem once again – this time in a deciding leg.

He may well walk-on to ‘Mission: Impossible’, but it hasn’t been that at all on the PDC Asian Tour for Ilagan – that’s now seven titles for the Cainta-based ace.

Elsewhere, Unicorn-sponsored Toru Suzuki reached the quarter-finals for the first time, while his countryman Seigo Asada was denied at the last 64 and semi-final stages.

BDO ladies’ world champion, Mikuru Suzuki, also embarked on her maiden run to the last eight, and became the first women to do so on the PDC Asian Tour.

She had averaged 89.5 in her second round win over Kai Fan Leung, before losing out to Malicdem in the quarter-finals.

The legendary Paul Lim reached the quarter-finals and semi-finals respectively, losing out to Pasig City’s Malicdem on both occasions.

The PDC Asian Tour will resume from July 27-28 as the tour visits Hong Kong’s Kowloonbay International Trade & Exhibition Centre for the first time.