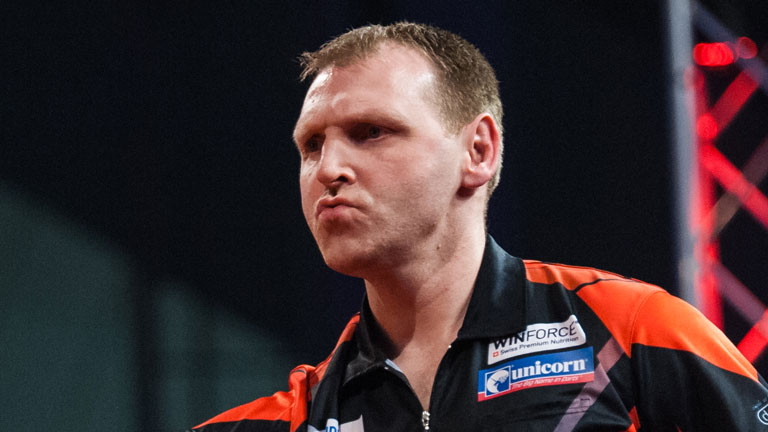 Switzerland’s Thomas Junghans almost did the double at the BDO Swiss double-header this weekend, as Fallon Sherrock and Deta Hedman also entered the winner’s circle.

Junghans was victorious in the Category B Swiss Open, beating the Dutchman Dennie Olde Kalter 3-2 in the final to claim his second BDO ranking title. The Swiss-German thrower hit four maximums, including one in the final leg, to run out the winner in the best-of-5 set encounter with an 89.52 average.

Former World Masters semi-finalist Junghans had been impressive throughout the day, posting averages of 90.66 and 96.84 in his quarter-final and semi-final victories over Wayne Warren and Francis Carragher respectively, before then triumphing in the final to book his place at the World Masters later this year.

Olde Kalter made his first BDO final courtesy of wins over seeds David Evans and Aaron Turner in the early point-scoring rounds before beating Jason Marriott in the quarter-finals. In the semis, he recorded an 89.58 average in a 2-1 win over Belgian thrower Brian Raman, who had dumped out top seed and 2018 winner Michael Unterbuchner in the last 16.

In Sunday’s Helvetia Open, Junghans once again made his way through the bottom half of the draw to the final, only to lose a last-leg thriller against Scotland captain Alan Soutar.

Arbroath’s Soutar, enjoying a rare weekend on the BDO tour away from his work as a firefighter, recorded wins over Raman, Italy’s Daniele Petri, Craig Venman and Jitse van de Wal on his way to the final, where he edged out Junghans 5-4.

Junghans’ list of beaten opponents on route to the final include 2019 Lakeside participant Jeffrey Van Egdom, Frenchman Thibault Tricole and Soutar’s county teammate Euan Callander in the semis, with Callander having seen off defending champion Nick Kenny 4-3 in the last 16.

In the ladies competitions Laura Turner made both finals but ended up tasting defeat on both occasions.

In the Swiss Open, Turner beat Corrine Hammond in the semi-finals to set up a meeting with Deta Hedman, who had won her first Swiss Open crown back in 1989. Hedman was in inspired form though, following up on her 85.53 semi-final winning average against Fallon Sherrock to beat Turner 2-1 and secure her third ranking title of 2019.

Turner once again beat Hammond in the Helvetia Open semis, but in that tournament she came up short against Buckinghamshire ace Sherrock. Turner raced into a 3-0 lead, only for Sherrock to hold her nerve and win the final four legs of the game to win 4-3 and secure her third title of the year after doing the double in Denmark last month.

Maison Wilson of England was also a double finalist in the youth competitions but unfortunately like Turner, he suffered defeat on both occasions. In the Swiss Open youth final, Wilson went down 4-1 to Emir Mujanovic. On the Sunday, Wilson was 3-0 up and within a leg of victory against Germany’s Lucca Scheuch but poor finishing from the English youngster and a clinical 128 checkout for his opponent saw the game finish 4-3 to Scheuch.

David Evans and Brian Raman were victorious in the pairs event, beating Thomas Bremgartner and Fernando Migliore 3-2 in the final.