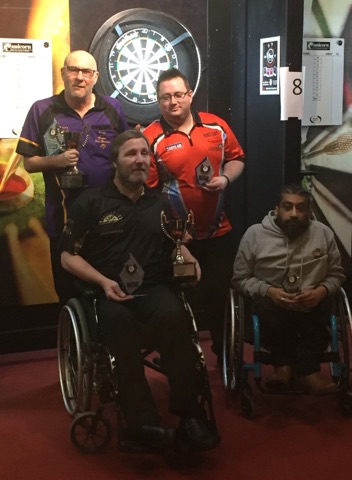 Darren Kennish did the double at the disability darts events in Chester last weekend, with Ricky Chilton and Pete Bramley splitting the standing titles.

Riley’s Chester played host to the BDDA Classic, a round-robin tournament, on the Saturday, with Kennish kicking off his weekend with a 3-1 over Kevin Stringer in the wheelchair classification event. The standing title went to Wales’ Chilton, who beat Matt Doe 3-1 in the final.

28 players from the UK and Belgium then returned to the venue on Sunday for the BDDA Winmau Open, the second ranking event on the new ‘Road to Winmau’ calendar, which culminates in the finals event at the famous Circus Tavern on November 7th.

Isle of Man thrower Kennish beat Rick Cartwright and David Gill to make the final of the Open, where he saw off Amar Dehar 4-1. Dehar had won last leg deciders against Kev Stringer and Mick Jones to make his first final of the year but he couldn’t match ‘The Greatest Showman’.

Kennish, who won the season-opening Eastbourne Open last month, now holds an 80 point lead at the top of the rankings, with Dehar in second and Gill 36 points further back in third.

The standing title went to Pete Bramley, who came through a field of 18 to win his first ranking crown of the year.

Bramley opened his tournament with a fairly routine 3-0 win over Alan Collins but he was forced to a deciding leg in his quarter-final with David Johnson before emerging a 3-2 victor.

He accounted for Wales’ Shane Havard 4-2 in the semis before defeating Doe by the same margin in the final to secure the title.

Two men beaten by Doe in the Open, Chilton and Michael Callaghan, currently occupy the top spots in the standing rankings following the opening two events.

Chilton, the Eastbourne Open winner, is top with 114 points, with Callaghan 14 points further back after reaching a final and a semi in the first two competitions. Bramley is third, despite not entering the Eastbourne Open, with Doe in fourth. Wales’ Ricky Snedden rounds out the top five.

The next event on the calendar is the Abergavenny Open, which will take place on April 19th.