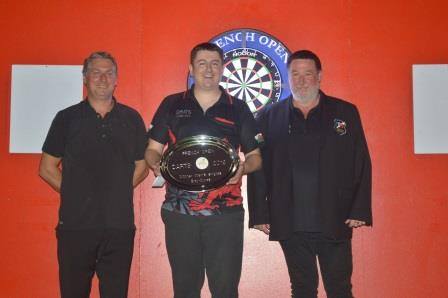 Kenny and Hedman victorious as the BDO returns to France

Nick Kenny and Deta Hedman were victorious as the BDO returned to Bray-Dunes in northern France for the 2019 French Open.

The competition fell off the calendar in 2018 but returned this year as Kenny made it three Welsh champions in the last four editions of the men’s tournament.

The Welshman won his first ranking title in 14 months at the Belgium Open less than two weeks ago and followed that up in Bray-Dunes by beating Nick Fullwell 5-1 in the final to match the achievements of Jim Williams and Dean Reynolds in 2017 and 2015 respectively.

Bennett had beaten the Cwmbran thrower at the German Open back in April but Kenny avenged that defeat by edging a tight game 5-4.

Fullwell, who was playing in his third final of the season, had beaten Brian Raman, Tony O’Shea, Gary Robson and Lancashire’s David Evans to reach the final, but the 50-year-old from Wolverhampton couldn’t match Kenny, who took home the €2000 (£1830) top prize.

The best placed Frenchman was Franck Ollier, who lost 5-0 to Evans in the quarter-finals. Home favourite Thibault Tricole, a winner of two BDO ranking titles in 2019, lost in the last 128 to Fabian Theeten.

In the ladies competition, Deta Hedman won her fifth ranking title and first in two months by beating old rival Lisa Ashton 5-2 in the final.

‘The Heart of Darts’ beat Antwerp Open winner Astrid Trouwborst, Casey Gallagher and Paula Jacklin before beating Ashton, who was playing in her fourth ranking final of the month.

Dutch international Danny Jansen won the youth competition, while Frederic Simon lifted the WDDA crown after recording a win in the final over Bruno Laurent.