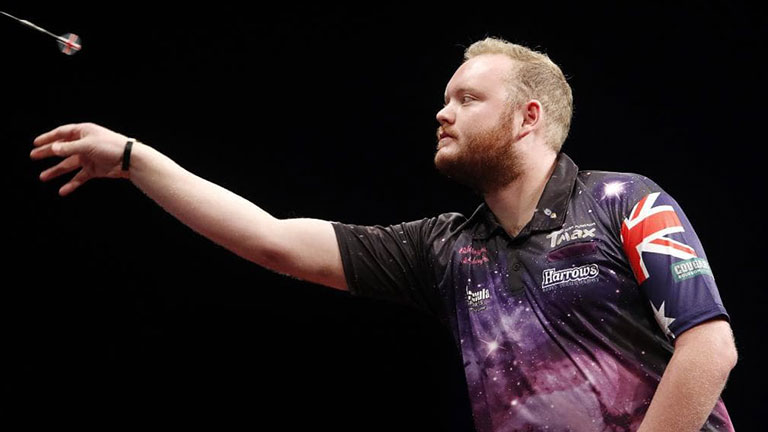 Robbie King will make his debut at the PDC World Championship in December after beating Steve Fitzpatrick 3-1 in the final of the Oceanic Masters.

After 30 DPA ProTour events over the course of 2019, the best of the darting scene in Australia and New Zealand came together in Barrack Heights to determine who would join Damon Heta at Alexandra Palace in a couple of months, with a DPNZ qualifier to follow in a couple of weeks.

In the first round, some notable names including Brendon McCausland and Lucas Cameron fell at the first hurdle, while Steve MacArthur was beaten in the last 64.

With the format best of 3 sets in every round apart from the final, there was the potential for some high averages, and Gordon Mathers and Haupai Puha both produced that in the last 32 in their wins over Joshua Walters and Dean Abbott respectively, both averaging over 95.

Tahuna Irwin, who qualified for last year’s World Championship before having to pull out, fell to Manny Kato, while previous qualifiers Bernie Smith and James Bailey were also beaten at the last 32 stage.

Robbie King had the standout performance of the last 16, only dropping one leg and averaging 95 against Thomas Justice. Gordon Mathers produced similar, continuing his excellent form with a 2-0 win against Nick Kohey.

Rhys Mathewson, Tim Pusey and Mick Lacey were all beaten in the last 16 as the tournament reached the business end and the best players rose to the top.

Puha, Fitzpatrick, Mathers and King made a total of 20 DPA ProTour finals between them in 2019, and all moved through to the semi-finals with averages in the 80s, Puha and Mathers doing so in style with straight-sets wins.

2018 qualifier Mathers won two of the last three ProTours, and was looking good for a return to North London, but a 91 average wasn’t enough against Robbie King in the last four as the Melbourne man came out victorious in three sets.

Puha and Fitzpatrick were closely matched in the other semi-final, but it was the latter who won the first two sets, both in deciding legs, to progress to the final.

With both King and Fitzpatrick making 4 DPA finals each this year, it was sure to be a close final, and the opening two sets were shared, both won 3-1.

However, three-time DPA event winner King came from behind to take the third and won two legs in 27 darts to steal the fourth and book his spot in the 2020 World Championship at Alexandra Palace, which starts on 14 December.