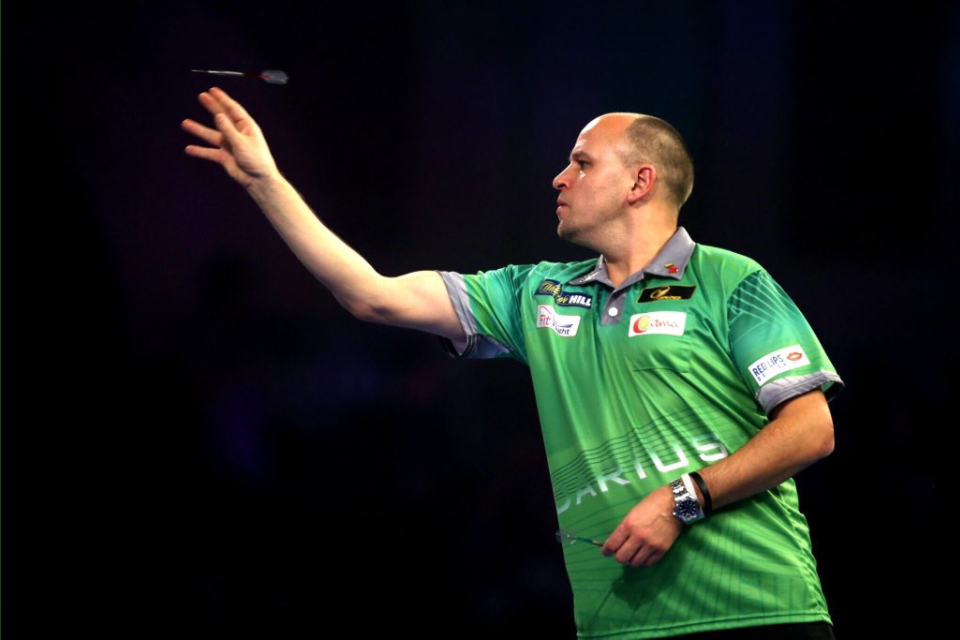 The opening game of the night was between the Asian Tour qualifier Lourence Ilagan and ‘The Dutch Destroyer’ Vincent van der Voort. The first leg was a cracker, with Ilagan hitting a 180 but Vincent held with a superb 91 checkout. Vincent hit a 180 of his own in the second leg to break Lourence’s throw and lead 2-0, but Ilagan broke straight back to make it 2-1 after Vincent missed 2 set darts. However, van der Voort was not to be denied, taking out 60 to take the first set. The first 2 legs of the second set were shared, as both players held their throws. Lourence Ilagan took the set lead with a magnificent 120 finish on tops and with an absolutely fabulous 12 darter, broke Vincent’s throw to level the match at 1-1. The Phillipines man was playing brilliant stuff, and was starting to get on top of Van der Voort. Lourence led the match for the first time by breaking Vincent’s throw in the opening leg of the third set, but his advantage did not last long as Van der Voort levelled up on double 2. Another break of throw followed as Ilagan fired in a fabulous 12 darter to lead the set 2-1. Vincent levelled up at 2-2 after Lourence missed one set dart to move into a crucial deciding leg. With a fabulous 14 dart hold, Vincent took the leg to lead the Phillipines man 2-1 in sets. Ilagan held at the start of the 4th set with an impressive 106 checkout, and broke Vincent’s throw yet again with a 13 darter to lead the set 2-0. The Dutch Destroyer had not given up on the set though, taking out 79 after Lourence missed 3 darts to win the set. Vincent levelled the set after Lourence missed another set dart to go within a leg of winning the match. After opening the leg with a maximum, Vincent threw a fabulous 13 darter to win what was an absolutely cracking Round 1 World Darts Championship match. Lourence Ilagan did himself, the Phillipines and the Asian Tour proud, but Vincent van der Voort’s experience shone through as he won out 3-1.

The second game of the night was between Wayne Jones and the African qualifier Devon Petersen. Jones was back at Alexandra Palace for the first time since 2015, and is a former semi finalist back in 2006. After the South African won the bull, the first two legs were shared emphatically on throw, with both players flying out of the blocks. Devon took out a clinical 48 to hold, before Jones saved the set with a crucial 96 on double 8. However, it was the South African to take the lead, taking out an excellent 94 to lead 1-0 with a 100% checkout record. After Jones missed three darts to hold throw, the African Warrior pinned his last dart at double 9 to break the Wolverhampton man’s throw in the opening leg of the second set. Petersen extended his advantage with another excellent finish, this time 101 to lead the set 2-0. It wasn’t long before Devon had a two set lead, pinning double 8 to take complete control of the match. Wayne Jones took a foothold in the match, checking out an audacious 102, going 20-Bull-double 16, to break Devon’s throw, before holding on double 13 to make the set 2-0. With another break of throw, Wayne Jones took the third set to make it 2-1, taking advantage of a poor sequence of legs from the South African. Jones held at the start of the 4th set, throwing an important 64 out, before breaking Petersen with a brilliant 83 on the bull. The South African hit back with a superb bullseye checkout of his own, nailing the 121 to make it 2-1. With an impressive 180 along the way, Devon took out 48 to get within a leg of the match and send the set to a crucial decider. However, with a nerveless 56 out on tops, Wayne Jones sent the match to what it deserved, a 5th and deciding set. The advantage was with Devon as he had the throw, but Jones was feeling confident after winning the previous two sets. Devon held throw at the start of the set with a 49 checkout, but Wayne levelled up on double 10, effectively making the contest best of three legs. A superb 120 out from Devon Petersen put him within a leg of the match again, piling the pressure on Jones. In a dramatic leg, Wayne pinned double 2 to bring us to the second deciding leg of the tournament. In what will surely be one of the most memorable deciding legs of all time, both players left 40 after 18 darts. Devon missed 3 darts, before Wayne returned the favour leaving 10. Petersen missed 3 more going inside the double 5 last dart, giving Jones three more darts at double 5 himself which he blew. The South African hit a nervy single 1, before pinning the double 2 with his last dart to finish off a thrilling game. It was a crucial win for Petersen for his hopes of retaining his tour card, but it will be a tough blow for Jones to take after finishing up the wrong side of a World Championship classic.

The third game of the night was the eagerly anticipated clash between the Rest of World Women’s qualifier Anastasia Dobromyslova and debutant Ryan Joyce. Anastasia was showing no signs of nerves, dancing along to Ryan’s walk on music as he walked to the stage. Dobromyslova opened with a 140, and took the opening leg with a confident double 8. The Russian threw another brilliant leg, leaving 40, but Joyce took out an outstanding 106 on double 16 to hold throw and level the set at 1-1. In the very next leg, with Anastasia waiting on 48, Ryan took out an incredible 122 on double 7 to break the Russian’s throw. In keeping with his superb run of checkouts, Joyce took out 95 on double 16 to take the first set against the darts with a very impressive run of finishing. Ryan held on double 8 to open the second set, before he broke Dobromyslova’s throw in the next leg to go within a leg of a 2-0 lead. He finished the set very swiftly with another hold of throw, to gain a two set advantage and having won 6 legs on the spin. Anastasia stopped the rot by nailing double 6 to hold her throw and lead the third set 1-0. Ryan levelled the set up with a third ton plus checkout, this time 116 to hold throw. Dobromyslova held her nerve brilliantly to nail double 12 and hold again to give herself a great chance of extending the match another set. Joyce held his throw comfortably to put himself on the verge of winning with a 16 darter, and finish the match he did, checking out on double 6 as ‘Relentless’ defeated Anastasia Dobromyslova by three sets to nil to book a second round tie with Simon Whitlock.