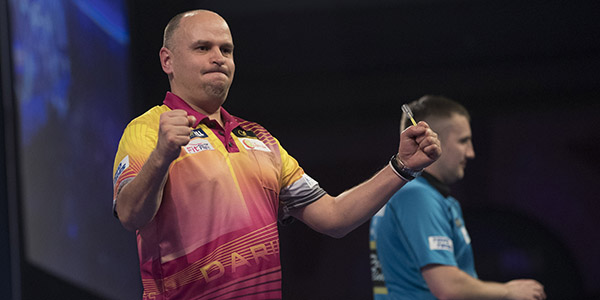 Darius Labanauskas made history as he became the first Lithuanian to win on the Alexandra Palace stage while Spain’s Toni Alcinas stunned former finalist Peter Wright.

Labanauskas fought back from behind to defeat ‘Prime Time’ Matthew Edgar – whose grandfather participated in the 1963 News of the World tournament at Alexandra Palace.

Edgar took the first set; punishing the Lithuanian’s squandered darts at the outer ring, but from there it was plain-sailing for ‘Lucky D’ – who reeled off nine of the next ten legs to seal his spot in the second round on debut at the World Darts Championship. Labanauskas will face the Netherlands’ Raymond van Barneveld in the second round, with the five-time World Champion embarking on his farewell tour, after announcing that he will retire in January 2020.

Peter Wright might have been dressed as Father Christmas but he didn’t deliver the goods and his sleigh was clamped by Spain’s Toni Alcinas, with the Spaniard proving a 3-1 winner in Sunday evening’s closing match.

Wright converted a terrific 161 outshot in the opening set, but that wasn’t enough to hinder Spain’s Alcinas – who pinned a 109 checkout with his opponent sat on two digits.

‘The Samurai’ found back-to-back 13-darters in set two to double his lead on the former UK Open winner, only for ‘Snakebite’ to whitewash him in the following set, to reduce the advantage.

Alcinas was forced to battle back once again; coming back from 1-0 and 2-1 down to complete a 3-1 win over Mendham-based Wright and set up a third round clash with either Canada’s Jim Long or Benito van de Pas.

Legendary Paul Lim endured a thorough examining from Ross Smith – who will be known to many as the man who held a five-year nine-darter curse on the European Tour. Smith came out a 3-1 winner in a solid showing from the 29-year-old. A strong start from ‘Smudger’ saw him land checkouts of 106 and 138 en route to taking the first two sets.

64-year-old, Lim, who hit the first nine-dart leg at a World Championship 29 years ago, reeled off three legs in succession to reduce Smith’s advantage.

The luck stopped there, though, for the ‘Singapore Slinger’ as he was on the wrong end of two 14-darters in set three and a 3-1 defeat. Kent-based Smith will move into the second round – where he’ll face Daryl Gurney on Tuesday evening.

Luke Humphries stole the show with a scintillating 97.58 average; blowing away 25-year-old Adam Hunt in less than 20 minutes. The first leg of the match went the way of ‘The Hunter’, however that was as good as it got for Hunt – who went on to witness his opponent reel off the next nine legs; hitting five maximums and a 121 outshot en route.

Brendan Dolan, William O’Connor and Germany’s Gabriel Clemens all joined the winner’s circle with whitewash victories while Dave Chisnall was forced to produce a resurgent performance as he came from 2-0 behind to edge past Josh Payne.

Asada: ‘I’m confident after finishing second in the Asian rankings’