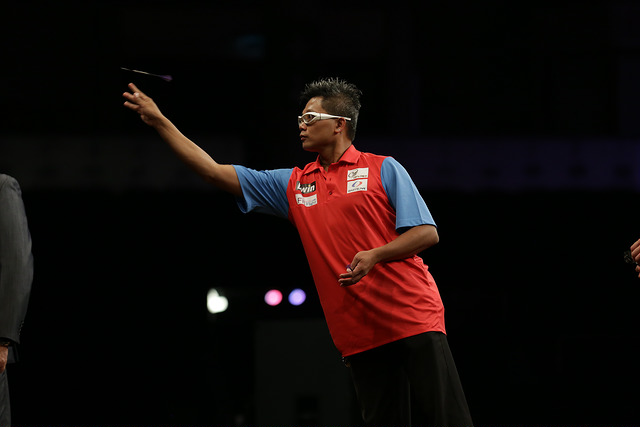 Royden Lam and Seigo Asada both claim titles in the opening weekend of Asian Tour darts while Noel Malicdem completes perfection on the opening day in South Korea.

The Hong Kong-based ace took the title and the $3,600 winner’s prize fund on the opening day as history was made for Asian darts.

Lam opened the day in Seoul with a 4-2 win over former World Championship qualifier Haruki Muramatsu before whitewashing Young-Tae Lee 4-0 with an average of just 74. Successive 5-1 victories followed before a treble of 5-2 wins put the PDC tour card holder and former UK Open qualifier into the final where he’d face Noel Malicdem – who whitewashed World Championship qualifier and Unicorn sponsored Xaio Chen Zong.

Malicdem produced a stunning leg of darts in the second leg of the encounter as he completed the first nine-dart leg in a PDC organised event in Asia. The Phillipino went on to lose the match 5-3.

World Championship qualifier and Japanese number one Seigo Asada took home the $3,600 winner’s prize fund on the second day in South Korea. Asada competed at Alexandra Palace in December, coming through his preliminary round tie with Gordon Mathers but was then whitewashed 3-0 to eventual winner Rob Cross. Following the tournament, Asada signed a sponsorship deal with Unicorn.

Asada didn’t have the best of starts to the tour loosing 5-0 in the last 32 on the opening day to Yuki Yamada but did beat the greatest Asian player of all time Paul Lim in the last 64.

‘The Ninja’ opened day two with a double whitewashing before a 5-3 win over Satoaki Yaguchi. A 5-1 victory in the last 16 put the Japanese ace into the quarter-finals where he saw off fellow countryman Haruki Muramatsu.

Asada was taken all the way to the last leg against Hyun-Chul Park but eventually came out victorious despite averaging just 83.3.

A disappointing weekend for Paul Lim as he failed to reach at least the semi-finals in either event.

The PDC Asian Tour will return next month as we travel onto China and Macao for the third and fourth events of the year.