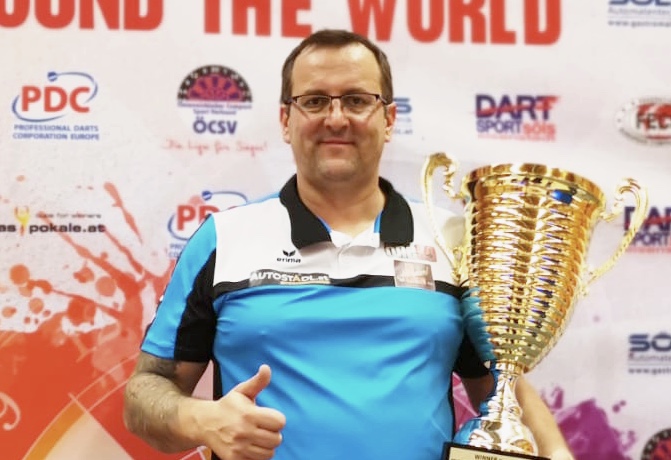 Lerchbacher, 47, defeated Rusty-Jake Rodriguez in the decider of the South-East Europe Qualifier, pinning a 107 checkout with his opponent sat on a two-dart finish to seal an Alexandra Palace return.

The Austrian saw off Greece’s John Michael in the quarter-finals, before booking his place in the decider with a comfortable 6-1 win over Alessio Marconi – who was one of two Italians in the last four.

Portela, who was edged out in the first round of the World Championship last December, broke throw at four-a-piece to move within one leg of qualification, before the Brazilian held his own to reign victorious.

‘Braziliant’ also saw off Fitzgerald’s compatriot and mentor, Norman Madhoo and his 2018 World Cup of Darts partner, Bruno Rangel on his way to the final.

Elsewhere, Ben Robb clinched a World Darts Championship debut as he came through the DartPlayers New Zealand Qualifier in Porirua on Saturday.

After undergoing a breakthrough year, winning in both the DartPlayers Australia and the DartPlayers New Zealand systems, Robb will make his maiden Ally Pally appearance after seeing off Mark Cleaver 7-3 in the final.

The 31-year-old was unbeaten in the group phase, before comfortably beating Warren Parry and Cleaver to seal the deal.

Another two World Championship qualifiers will be confirmed in the coming week, with the Rest of World Women’s Qualifier and the German Superleague taking place.

Herewini and Mercer triumph at the Ted Clements Memorial