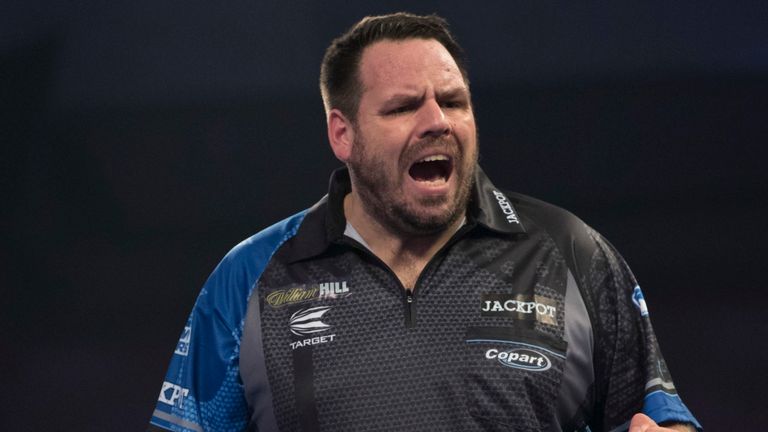 Adrian Lewis came back from 3-1 down to beat Jim Williams 5-3 to qualify for the last 16 of the 2019 Grand Slam of Darts in Wolverhampton.

Defeat for Williams means no player inside the BDO system has qualified for the knockout stages for the first time in the events history.

After initially taking the lead, Williams bounced straight back to lead 2-1.

Lewis missed five darts to level the game at 2-2 before Williams made it 3-1.

Jackpot then took out 86 to break Williams to make it 3-2 before a 77 checkout and a 12 dart left levelled the scores.

And the two time World champion roared on literally, hitting a 113 checkout to seal a huge win in his road to rejuvenation.

Elsewhere in Group A, Michael Van Gerwen averaged 111.38 in a 5-2 win over Ross Smith, who himself was averaging over 100.

Robert Thornton kept his recent resurgence going by qualifying for the last 16 following a tight affair with BDO Women’s World Champion Mikuru Suzuki. The Japanese thrower missed a dart to send the game into a last leg decider before Thornton closed the game to prevail a 5-3 victor.

Thornton will be joined by Gerwyn Price by qualifying through Group C. The Iceman hit three maximums and averaged 97 in a 5-2 win over World Youth champion Dimitri van den Bergh.

Ian White qualified through the groups stages at Wolverhampton for the first time after beating BDO World Number 1 Wesley Harms 5-4. White raced into a 3-0 lead before being pegged back by Sparky.

However, Diamond nailed Double 8 to seal his place in the last 16 of the competition.

James Wade was the other man who made it through the group despite a 5-4 defeat to Steve Lennon. Wade only needed three legs, and got those in double quick time.

However, the game shifted, thanks in part by a 89 checkout to level the scores before hitting double 14 to beat the Machine.

Dave Parletti chalked for the BDO in what has been a disappointing campaign for them, his 5-2 win over William O’Connor saw him exit the competition on a high.

Darren Webster secured qualification for the last 16 by beating last years runner-up Gary Anderson 5-4 in a nip and tuck contest.

Tomorrow sees the beginning of the knockout stages of the competition with Michael Smith facing Daryl Gurney and Peter Wright taking on Rob Cross as the tournament hots up.