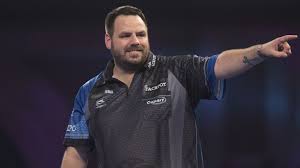 Adrian Lewis denied Raymond van Barneveld a much-needed £10,000 in ranking money as ‘Jackpot’ put an end to a string of defeats in finals and won his first PDC title in almost two years in Wigan.

2018 saw the Stoke-on-Trent star lose finals to Michael Smith, Mickey Mansell, Michael van Gerwen and Raymond van Barneveld, but it was Players Championship 8 at the Robin Park Tennis Centre that finally did the job for the two-time World Champion.

128 players were set to battle it for the title and some crucial ranking points in the race to qualify for the big TV tournaments, and they must’ve been buoyed by the news that Rob Cross had pulled out due to illness, following Michael van Gerwen in withdrawn. Nathan Rafferty was the only player to play on Sunday who hadn’t played on Saturday.

The first round draw saw a mouth-watering clash between Jeffrey de Zwaan and Glen Durrant on board five, while Van Barneveld and Gary Anderson both had fairly decent draws. Board two, which included ‘The Flying Scotsman’ was chosen as one of the streaming boards, as was the De Zwaan-Durrant board.

There weren’t as many huge averages in the early stages as we normally see at these events, but top seed Ian White, three-time Lakeside World Champion Glen Durrant (against De Zwaan) and former World Master Krzysztof Ratajski were all impressive, while Luke Humphries contrived to lose to Madars Razma despite averaging twelve points higher than the Latvian.

Both of the finalists at Players Championship 7 fell early as winner Dave Chisnall lost a high-quality encounter 6-4 to Keegan Brown and runner-up Daryl Gurney was defeated by Germany’s Robert Marijanović after seeing off Wayne Jones in the opening round. Other seeds to fall in the last 128 included Joe Cullen, Danny Noppert and Kyle Anderson, while Gary Anderson let a 4-0 lead slip, losing out to Conan Whitehead.

All of the big averages in the second round came in the bottom half of the draw and many of them in the same matches as Steve West, Max Hopp, Steve Lennon and Krzysztof Ratajski were denied with ton toppers and Cristo Reyes, Jan Dekker and Madars Razma all sealed last 32 spots with 100+ averages, relatively rare occurrences so far this season for that trio.

Gerwyn Price and Michael Smith both lost out in the last 64 despite very decent performances, losing out to Andy Boulton and Dekker respectively. The bottom half of the draw was already becoming wide open with troubled Raymond van Barneveld taking advantage of his draw, although he had to survive large amounts of match darts from Zoran Lerchbacher.

John Henderson and James Wade both lost out in classic matches to Jonny Clayton and Vincent van der Voort as the ‘Dutch Destroyer’ and Keegan Brown incredibly became the only two players to win their board on both days at Robin Park. Glen Durrant fell at the last 32 once more, but again to a top player in Adrian Lewis, while Van Barneveld and Ian White continued their quest for first PDC titles of 2019.

The great Dutchman upped his game in the last 16 against Martin Schindler, finding a clutch 80 checkout in a deciding leg to beat Martin Schindler with a 101 average. He’d play Jan Dekker in the quarters, while Mervyn King was the most notable casualty of the fourth round and White continued his impressive consistency.

Keegan Brown and Van Barneveld both averaged over 100 to set up a semi-final clash, while Jonny Clayton and Adrian Lewis were comfortable winners. After Lewis and ‘Barney’ came through in contrasting fashions, the former averaging 110, it was ‘Jackpot’ who surged away in a initially close final to win his 25th PDC title and his first in two years, denying a fairytale for Raymond van Barneveld going into the return of the European Tour in Leverkusen next weekend.