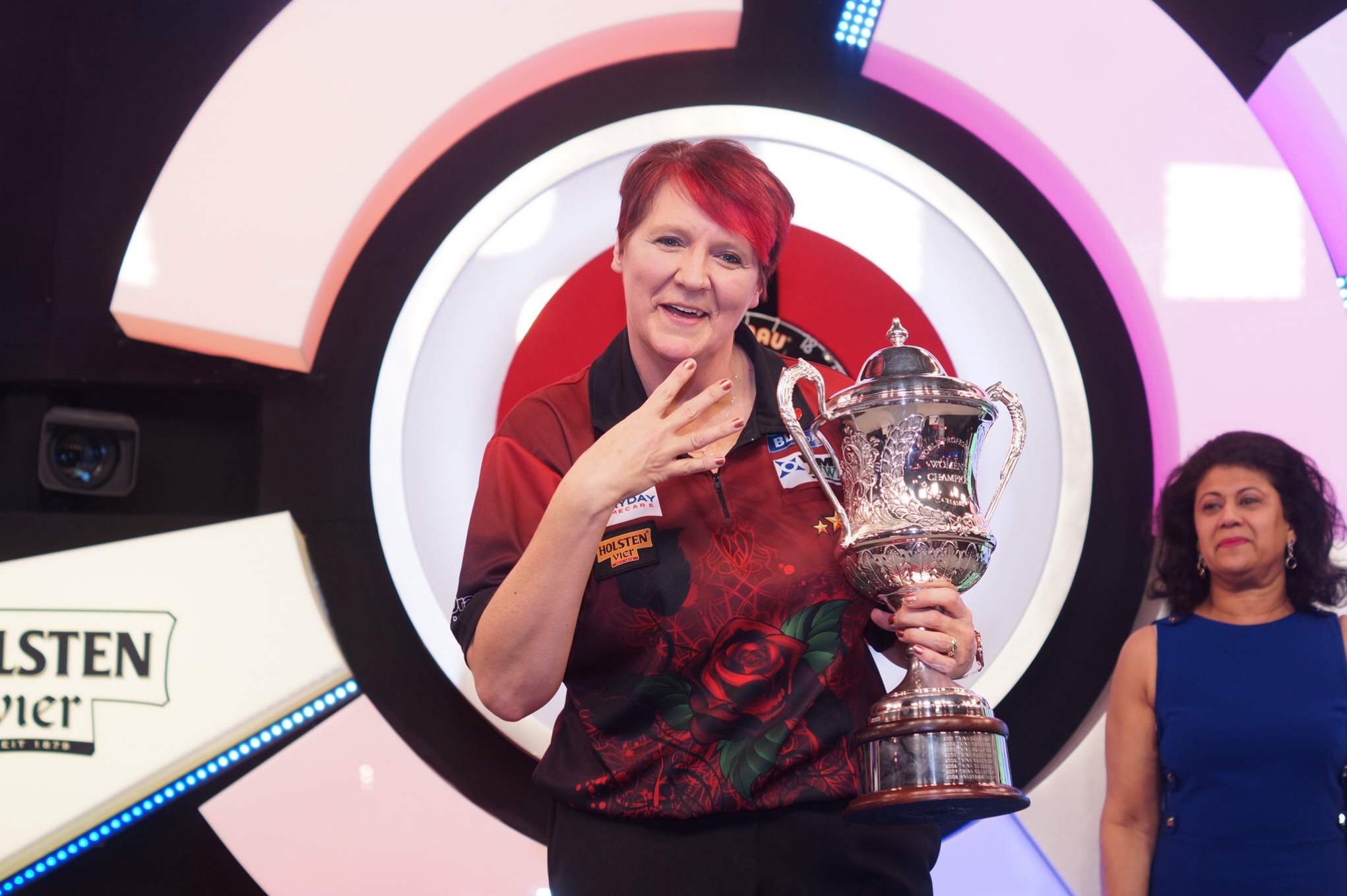 Lisa Ashton has retained her Ladies World Championship crown and lifts the trophy at the Lakeside for a fourth time.
The number four seed averaged just under 90, producing the best performance by a women on the Lakeside stage, as she saw off three time World Champion Anastasia Dobromyslova 3-1.
Dobromyslova averaged over 93 as she whitewashed the ‘Lancashire Rose’ 3-0 in the opening set. The Russian hit a 100 checkout in the second leg with Ashton sat on double 5. The reigning champion fired in five 140s in the second set winning it 3-0 to level up the match at 1-1. Ashton then followed with a brilliant 130 checkout on the bullseye to take a 2-1 set lead and go within one set of a fourth World Championship title. ‘The Lancashire Rose’ averaged 93.94 in set three.
The Russian averaged just 66 in the final set as Lisa took advantage and whitewashed Anastasia taking out outshots of 66 and 62 along the way. Ashton finished the final with a 89.80 average and 40% on the doubles.
The Lancashire-based star has been competing over in the PDC on the Challenge Tour this year and it seems to have done her bundles as she picks up another victory at the Lakeside.

On her way to victory at the Lakeside the now four time World Champion only lost one set, whitewashing some fantastic darters along the way. In round one she saw off Wales International Rhian Griffiths before edging past a former World Championship finalist in Fallon Sherrock 2-0. Deta Hedman, a postwomen from Jamaica, was next to take a thrashing from the World Champion before Lisa completed a brilliant tournament beating Anastasia Dobromyslova 3-1.

Anastasia’s route to the final was debatably harder as she beat Hungarian Anca Zijlstra 2-0 before seeing off her best friend and Winmau World Masters winner Lorraine Winstanley by the same scoreline. ‘From Russia with Love’ then saw off 10-time Ladies World Champion Trina Gulliver MBE 2-0 to reach the final for a fourth time at the Lakeside.

There are a lot of rumours that the BDO World Championship will not be held at Lakeside Country Club next year and if that is the case, what a way to finish off for the Women. A top class tournament and based on their performance they deserved a lot more prize money than they are getting!

Michael Unterbuchner “I just take one game at a time”