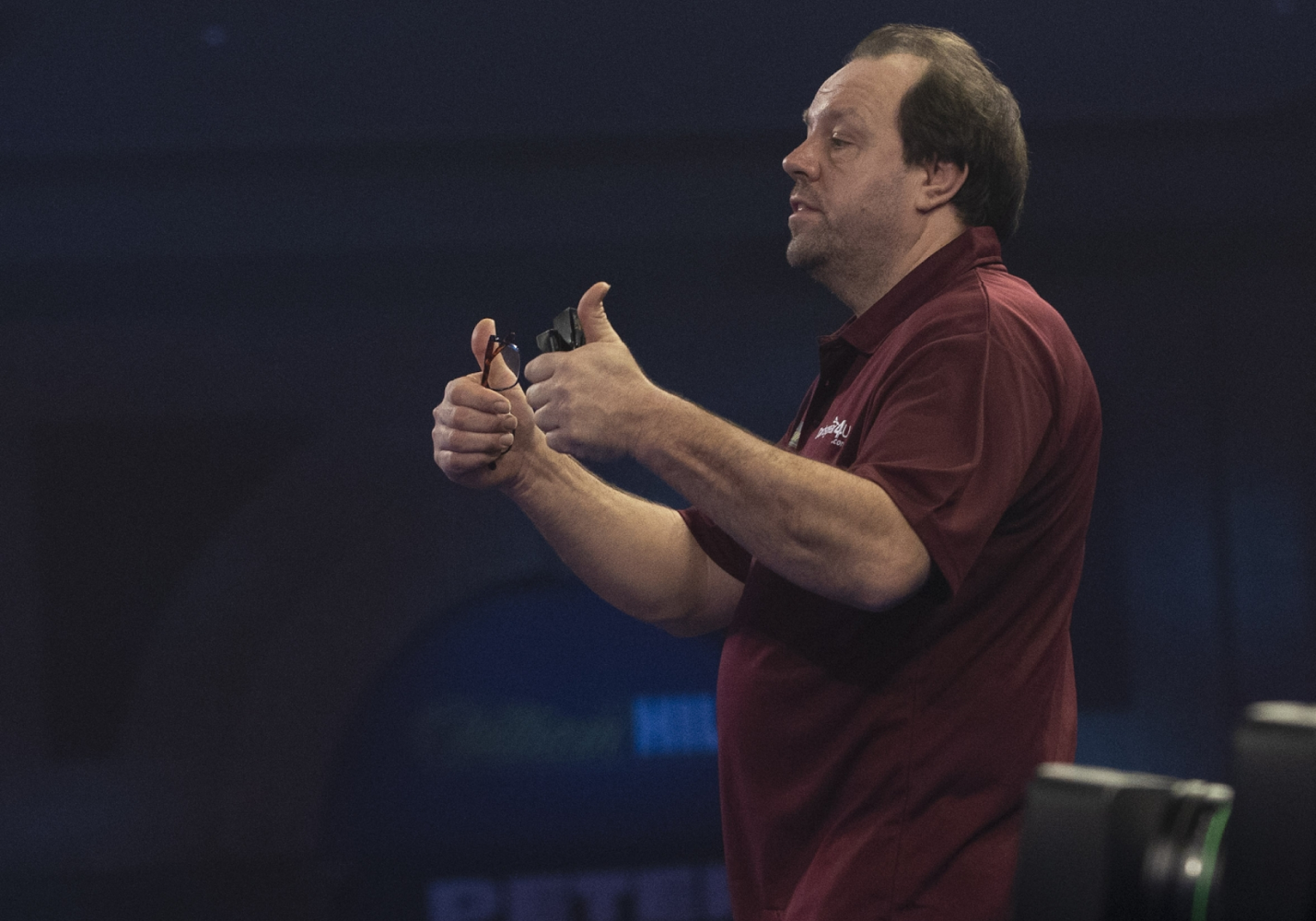 Jason Lowe put in a typically unflappable display as he saw off fourth seed Michael Smith to pull off arguably the biggest upset of the World Darts Championship so far.

Lowe stormed into a two-set lead, winning the first six legs, and after a mini-comeback from Smith, the builder from the West Midlands took out 101 to become the last man into the last 32.

Nathan Aspinall nearly became another top-ten seed to exit in their first match, but he survived a blistering start from Scott Waites to come through from 2-0 down.

All of the other six seeded players in action progressed, including Gary Anderson and Dave Chisnall as the line-up for round three was neatly completed on the last day before the Christmas break.

Day nine started with a clash of styles between Ricky Evans and Mickey Mansell, and it was ‘The Clonoe Cyclone’ who capitalised on a poor first set from his opponent to lead.

From there, Evans improved considerably and had very few bad legs, completing a 3-1 win with a 102 checkout to set up a meeting with Michael van Gerwen for the second straight World Championship.

Two-time champion Anderson recovered from a scrappy opening leg to whitewash Madars Razma in the first set, but the Latvian came back admirably, incredibly starting two consecutive legs with visits of 171 followed by 177 on the way to levelling.

‘The Flying Scotsman’ won set three 3-1, before a 161 helped him on his way in the fourth set. He had to come through a fifth leg in that one, but did so in 19 darts to survive something of a banana skin.

Stephen Bunting didn’t get off to a great start against Andy Boulton and was struggling to find his best game before a 148 checkout gave him the confidence he needed to win the second set.

He reeled off set three in straight legs after ‘X-Factor’ dropped his level, but Boulton did the same to Bunting in the fourth set to send it all the way.

The two players admirably held throw on four consecutive occasions to set up a tense deciding leg, but ‘The Bullet’ found a superb 11-darter with Boulton left on 81 to book a round-three clash with James Wade.

Mensur Suljović won three closely-fought legs to take the lead against Matthew Edgar, but ‘Prime Time’ showed his prowess on double 16 in set two, finding that target with his last dart on three occasions to make it 1-1.

However, Edgar’s scoring wasn’t quite good enough to compete with something close to Suljović’s best game from there as the Austrian reeled off the final two sets for the loss of only one leg as he looks to improve his poor record at the World Championship.

The evening session began with a good win for Dave Chisnall over Keegan Brown. The eighth seed missed a dart to win the first set, but didn’t miss the opportunity at the same point in the second set, both of the openers going all the way.

That seemed to knock the stuffing out of Brown slightly, and although ‘The Needle’ led 2-1 in the fourth set looking to take it to a fifth, Chisnall came back and progressed 3-1.

Jermaine Wattimena was unsurprisingly up-and-down in his match with debutant Nick Kenny, but had enough good moments to see off the Welshman.

Kenny did take set two, but a 156 finish followed by two consecutive 15-darters to end the match saw Wattimena through to a game with stablemate Dimitri Van den Bergh.

In the penultimate match of the day, Scott Waites carried on where he left off from his first game as he averaged 107 for a two-set advantage against twice semi-finalist Nathan Aspinall.

‘The Asp’ wasn’t doing much wrong and even hit a 160 checkout, but his luck turned in set three as Waites’ form dropped slightly, before Aspinall bagged set four as well to take it to the final set.

It was a set of huge finishes as the former UK Open champion took out 150 in the first leg, before ‘Scotty Too Hotty’ produced a stunning 125 on the bull to go within one of the match.

However, he missed four darts to win in the next leg and couldn’t recover in time for the decider, Aspinall surviving a big scare to continue his impressive record at Alexandra Palace.

The final man to take to the oche in the tournament was one of the favourites, Michael Smith, but he got off to a nightmare start, making a mess of a finish to allow Jason Lowe to clinch the first set 3-0.

Lowe’s scoring was sensational in the early stages and meant he could afford a few missed darts at doubles. Smith didn’t really get close to the Cradley Heath man as he doubled his advantage.

‘The Bullyboy’ took out a clutch 74 to save the match, but was struggling to keep his frustration under control at times and Lowe produced another whitewash in set four to seal a win that sees him move into the top 64 less than a year after winning his Tour Card.

The result means that Maik Kuivenhoven is now likely to lose his place on the tour after the event, with Mark McGeeney waiting nervously to see if Danny Baggish reaches the last eight.