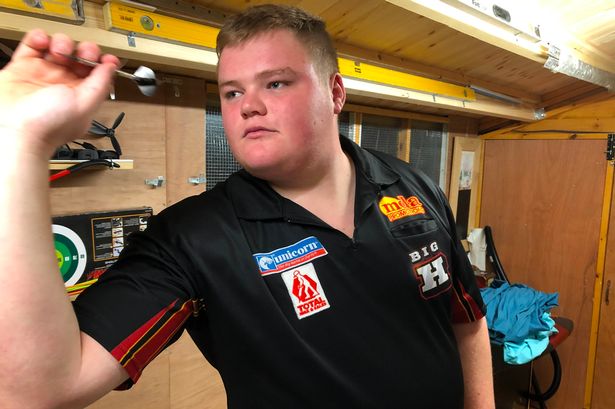 Harry Ward is the latest man to claim his maiden PDC ranking title, just four months after joining the PDC ranks. He captured the sixteenth edition of the Players’ Championship events.

“Big H” was steady throughout the day, taking care of Vincent Kamphuis and Madars Razma in the opening rounds by 6-3 and 6-2 scorelines respectively.

He edged out James Richardson 6-5 in round three, and needed a deciding leg to send 2019 World Championship Michael Smith packing, a 145 checkout from Ward the match winner.

In the quarter finals, Ward went 5-2 up against UK Open Champion, Nathan Aspinall, but squandered four match darts before eventually falling over the line for a third successive 6-5 win.

It would be an unfamiliar semi final line up in South Yorkshire, and Ward overcame Portuguese, Jose de Sousa, 7-4. A 92.9 average was then enough for the Derbyshire newcomer to take the crown against Hopp, despite again missing three darts to seal the match in the fourteenth leg.

Hopp started his day with a 6-2 win against Mark McGeeney, aided by a 105.2 average.

Wins against Benito van de Pas, Jermaine Wattimena and Alan Tabern sealed the German’s quarter final place, where he beat Danny Noppert 6-3. He then squeezed past Robert Thornton in the last four with a 7-6 win.

The aforementioned Thornton enjoyed a huge return to form, after a large amount of time in the darting doldrums. The former World Master, UK Open and World Grand Prix champion was responsible for the demise of Michael Van Gerwen in the last 32 with an impressive 6-4 victory. He followed this with a nine darter and a 104.3 average in the last 16 with a 6-3 win against Krzystof Ratajski, before falling to Hopp.

Yesterday’s winner Glen Durrant crashed out in the opening round, as Tytus Kanik sealed a 6-4 win. His fellow finalist, Darius Labanauskas also fell in round one, with Ross Smith eliminating him 6-3.

Raymond van Barneveld was given a tough opening round draw, and although Dave Chisnall only averaged 87.1, it was still good enough to put the five time world champion out, 6-4.