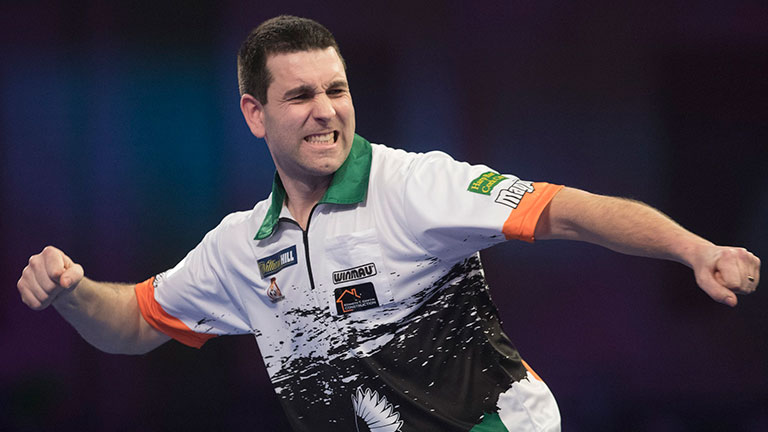 With back to back Pro Tour events taking place at a peculiar time of the week this week, it was the Irishman, William O’Connor who came through the tough field to claim his first PDC Title in Barnsley.

“The Magpie” was steady throughout the day, and defeated UK Open Champion, Nathan Aspinall 8-4, in what was only his second final, to pick up the £10,000 first prize. A 98.6 average was enough for the Limerick man to comfortably triumph over his opponent at PC13.

“I’ve been playing well all year but haven’t had any good results, so maybe I’ve used all my luck in one day.

“I’m happy to move up the rankings a bit and now I want to add a couple more titles to my name and see where it takes me.

“I have the game to win more, I just need to be more consistent and produce a lot better than I have been doing over the years, but the same can be said for many players on tour.”

O’Connor began the day with a last leg win against Rowby-John Rodriquez, before Luke Humphries and Luke Woodhouse were defeated 6-2 in rounds two and three respectively. He then posted a 105.8 average to see off Steve Beaton in the last 16, and reached the semi finals by edging Jeffrey de Zwaan 6-5.

It was a northern v southern Ireland clash in the final four, with O’Connor causing another surprise by beating Daryl Gurney 7-5 with an impressive 102.2 average clinching his place in the final. He showed no signs of nerves against a man with a PDC major to his name already to score a first PDC tournament win.

It was agony for Aspinall, as he was impressive himself in reaching the final. A 106.3 average kicked off the Stockport native’s day with a crushing 6-1 win against Matthew Edgar. Wins over Keegan Brown and Boris Koltsov booked his place in the last 16, where he blitzed Robert Owen 6-0. A 101.6 average was enough t see off former BDO World Champion, Christian Kist, 6-3 in the quarters, and Aspinall accounted for Adrian Lewis, 7-4 too book his place in the final.

It was a decent day for Raymond van Barneveld, who back up his last 16 efforts in Germany last weekend, with the same outcome in Barnsley. The Dutchman was second favourite with the bookmakers for his first round clash with Corey Cadby, but the five times World Champion came out on top, 6-4. A 6-2 win against Peter Hudson was backed up with the same scoreline, and a 103.9 average in beating Nathan Rafferty. It would prove to be a familiar foe that eventually did for him, with Peter Wright eliminating him 6-5 in the last 16.

Gary Anderson returned to action, but was thumped 6-1 by Geert Nantjes, averaging just 83 in the process.

Mark McGeeney continues to make decent progress on the circuit, and he posted a whopping 111.6 average to beat Ian White 6-2 in round one. He enjoyed another decent run to the last 16, where Christian Kist triumphed 6-4.

Justin Pipe continues his steady return to form, and the Somerset man will be content with a quarter final run.

Gerwyn Price exited at the last 64 stage in a high quality 6-3 defeat to Luke Woodhouse, while fellow Premier League star, Michael Smith went only one round further, defeated 6-3 by Cristo Reyes.