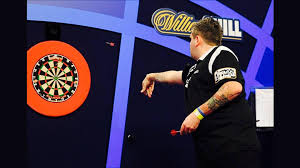 Jason Marriott recovered from a disappointing Q-School to make two last 32 appearances on the first of five weekends of Challenge Tour action on the 2019 PDC tour.

The PDC Challenge Tour has been a route to super-stardom for many players since its inception in 2013, most notably 2018 PDC World Champion Rob Cross, and is available to unsuccessful Q-School participants, of which dartsplanet.tv sponsored player Jason Marriott falls into the category. It holds four tournaments on five different weekends throughout each year, and the 2019 edition got underway this week.

With an unprecedented number of entrants, well over 250 in each of the four events, play started at 10:30am and went on for around 12 hours on both days, so it was rare to see any players going deep in three or four tournaments, although Mick Todd and Ritchie Edhouse were exceptions to that. As for Jason Marriott, he was handed a bye through the last 512 in event one, into the last 256 where he was drawn to face John Lieber on a relatively favourable Board 8.

Lieber has only recently made strides into PDC darts, so it was a game Marriott would’ve expected to win to kick-off a potentially fruitful weekend after injury disappointment at Q-School. It was at the same venue, in Wigan, but it was a different story for ‘Super Mario’ as he eased into a 3-0 advantage, with Lieber nowhere near him. Marriott’s level slightly dropped, though, allowing his opponent to win four of the next five legs, with the 2014 PDC protégé champion missing match darts to win 5-3. However, he got over the line in the decider to seal a scrappy win and a last 128 meeting with Shanendo Aué.

The Dutchman took the first leg before Marriott caught fire and reeled off three quick legs to lead 3-1. However, his standard slipped again and he allowed Aué to regain a foothold in the match, holding throw twice with 21 and 23 dart legs, but ‘Super Mario’ eventually finished the contest in the eighth leg to move through to the last 64 and guarantee himself £50 in prize money.

His third game of the day saw him pitted against Mike Whitehead, and once again it was a promising start for Marriott as he won the first leg in 22 darts. However, Whitehead came back to lead 2-1 and 3-2, before our sponsored player continued the topsy-turvy fashion of his CT1 games by winning the next two legs and taking the match in a decider. That saw him double his prize money and progress to the last 32, potentially crucial with Players Championship appearances up for grabs with high finishers in the Order of Merit after the first weekend.

The last 32 meant a meeting with Spanish ace Jesús Noguera, who was one game away from qualifying for a European Tour at the back end of last year. That meant nothing to Marriott, though, as he took the first leg. Noguera recovered well and showed his class as the match went on, winning five consecutive legs, three of them in 15 darts or less to end Jason Marriott’s CT1 hopes and leave him with £100 in prize money.

The second event of Saturday handed ‘Super Mario’ a last 256 meeting with Thomas Gregory. Despite Marriott’s highest average of the weekend so far, Gregory got off to a blistering start to ease into a 4-1 lead. The Lincolnshire man got two legs back, but Gregory came through 5-3 to turn Marriott’s focus onto the two events on Sunday.

Another early start saw him pitted against Finland’s Pauli Finnilä in the last 256, but Marriott produced an incredible first three legs as he took a 3-0 lead, averaging 100. The astronomical standard continued as Finnilä won the next two legs in 27 darts, but Marriott kept his cool to defy a 91 average from the Finn and progress to the last 128 5-3, where he would face Stephen Gallimore, who has had several deep runs in these events before

Marriott’s overall standard reverted to that of Saturday as he took a scrappy opener before being left on double 10 in two of the next three legs and watching Gallimore move ahead 3-1. ‘Super Mario’ held his throw on the next two occasions but could only watch on as an 18 dart leg was enough for Gallimore to end Marriott’s hopes in the last 128.

As he was in the first event of the weekend, Marriott was drawn into the top quarter of the draw in the final tournament, and once again it was a favourable route to the board final. Grant Whittaker was his first opponent, and Marriott did enough to win 5-1, although it wasn’t a game to write home about. The next game saw a rematch with Shanendo Aué, and it was a repeat of the result, albeit more comfortable for our man.

His 3-0 lead was cut back to 3-2, but he took the final two legs to win 5-3 and knock out Aué at the last 128 stage for the second time in the same weekend. The board final meant Marriott’s toughest assignment of the four events so far as he took on Simon Preston, who held a PDC Tour Card from 2016 to 2017 and won a Challenge Tour event last year.

Just like he did against Pauli Finnilä, ‘Super Mario’ produced a fantastic performance, notably winning back-to-back 15-darters to move ahead 3-1 and taking out 58 in the seventh leg for a convincing 5-2 win with a 90.6 average. Marriott was left on a double on the two legs he lost, so it was a fantastic performance from the 2014 PDC protégé champion, who moved into the last 32 for the second time of the weekend where he would meet Russian superstar Boris Koltsov.

Koltsov has been a prominent figure in the sport for several years, appearing at the World Cup several times, impressing on the European Tour last year and making three appearances at the World Championship. He was too much for Marriott as an impressive game was only tainted by a 23 dart leg. The other six legs were all won in seventeen darts or less, but only two of them for the Lincolnshire thrower as he picked up another £100. Koltsov went on to win that particular tournament, so certainly no shame there.

That leaves him 52nd on the Challenge Tour Order of Merit after the first weekend. Still plenty of room for improvement, but promising signs for Marriott.

Edhouse and Koltsov winners in second day of Challenge Tour