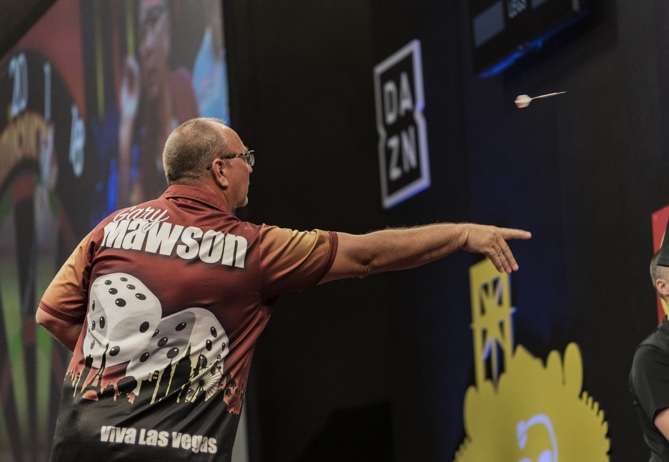 The Syracuse Open is one of the largest tournaments in the USA in terms of population as hundreds of throwers take to the Holiday Inn, Liverpool in New York annually.

Former World Matchplay champion Larry Butler has lifted the tournament on three occasions, though, departed in the last 16 in this year’s edition, while three-time world champion John Part was defeated in the previous round.

Thanks to his exploits in New York, Canada’s Mawson now secures his place at the World Masters in October, and gains all important points towards the BDO American rankings.

Paula Murphy claimed the ladies’ crown with a hard-fought win over Debra Ivey in the final, bouncing back from her disappointing early exit 12 months ago.

Prior to the Syracuse Open being played out, many competitors experienced atrocious weather conditions during their journeys, with the Hedrick family probably enduring the worst.

She said: “Headed to a dart tournament in New York and someone decided to send us white out conditions right before the PA [Pennsylvania] border.

“Thank god Joe has some amazing manoeuvrability skills because two semi-trucks crashed and exploded right in front of us and we didn’t get a scratch out of any of this. Let me tell you it was one of the scariest things I’ve ever been through. Thank goodness we’re all okay.”

Samantha Gibbons claimed the women’s title in Quebec with a narrow victory over Darlene van Sleeuwen, while Teresa Quan saw off Stacey Pace to lift the women’s Camellia Classic.