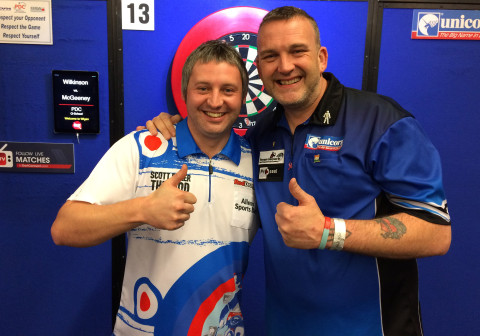 BDO World Championship participants Mark McGeeney and Baker came through on day two of Wigan’s Qualifying School to secure their two-year tour cards and places at the UK Open.

Following the successes of Jamie Hughes and Harry Ward on Thursday afternoon, McGeeney and Baker will join the pair on the £14m professional circuit after coming through a field of just under 400 in Wigan.

McGeeney – who fell at the final hurdle on Thursday at the hands of 21-year-old Ward – began his day with victories over Dave Prins, Scott Dale, Wigan’s Martin Atkins, Andy Chalmers and Mark Hickney as he made the last 16, before back-to-back wins of a 5-2 scoreline over ‘Superman’ Matt Clark and Jamie Bain put the BDO number one on the brink of a tour card.

The Stockport ace trailed 3-1 in the decider against Carl Wilkinson, but battled back, reeling off four of the next five legs, including a 13-darter in the deciding leg to pick up his PDC tour card.

Scott Baker emulated fellow Tipton man Jamie Hughes in winning his tour card. ‘The Mod’ got off to a flying start on Friday morning as back-to-back whitewashes over Mark Espocito and Ladies World Championship finalist Lorraine Winstanley, and a 107.7 average in seeing off David Adshead put him into the last 64.

Impressive victories against the highly-fancied Barrie Bates and Stephen Burton, followed by successive 5-2 wins over Jon Worsley and Jim Williams put him one game away from a dream debut at Qualifying School.

America’s Danny Lauby underperformed in the decider as he took just the one leg off Tipton’s Baker, as ‘The Mod’ raced to a hefty 5-1 victory to clinch his PDC tour card at first attempt.

Elsewhere, it was yet another difficult day for reigning Lakeside World Champion Glen Durrant who suffered a second successive exit at the last 128 stage, this time at the hands of Vince Tipple, while Lakeside runner-up Scott Waites was dumped out in the second round by Lee Evans.

Play continues on Saturday morning in Wigan, with a further two automatic tour card up for grabs, and a number of players looking to enhance their chances of being amongst those qualifying through the order of merit.

Hughes and Ward earn Tour Cards on Day One