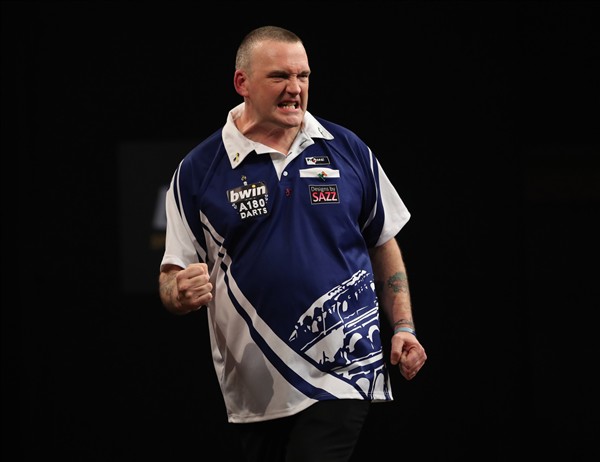 Andy Hamilton so nearly produced another outstanding comeback at the 2018 Finder Darts Masters, but it was Mark McGeeney who progressed 5-4 in one of eight winner-takes-all men’s clashes at the Hotel Zuiderduin in Egmond aan Zee.

‘The Gladiator’ went 3-0 ahead with checkouts of 120 and 121, and after ‘The Hammer’ produced a ton-plus finish of his own (115) to get a leg on the board, McGeeney took out 148 to move within one of the quarter-finals. Hamilton was clinical on the checkouts as well, finishing with 4/4, and after McGeeney missed a match dart to win 5-3, the former PDC World finalist completed an 11-darter to set up a third decider out of three in Group E. However, it was a relatively comfortable hold for the Lakeside runner-up who progresses to a last eight match-up with Scott Mitchell after he also managed to squeeze past Michael Unterbuchner 5-4 in the afternoon session.

Once again, some of the day’s more impressive performances came in the ladies and youth events with Keane Barry averaging over 88 in a whitewash win over Lars Plaisier after the Dutchman had lost 4-2 to Nathan Girvan in the afternoon session. Barry will play Levy Frauenfelder in tomorrow’s youth final after he beat Kevin Lasker 4-1. The Dutchman also lost to Jurjen van der Velde in the afternoon session without doing too much wrong, going down 4-0 to the World Youth Master, who averaged over 91.

In the women’s event, Lisa Ashton’s wait for a title in this event since 2008 looked to be continuing, 3-1 down to reigning champion Aileen de Graaf, but a stunning 157 checkout inspired her to a comeback after the Dutchwoman missed a match dart for a 4-2 success. ‘The Lancashire Rose’ took out 96 in the decider with De Graaf sat on 56, and she will play Fallon Sherrock in the final after she progressed comfortably, seeing off Deta Hedman 4-3 courtesy of a 140 finish after ‘The Heart of Darts’ had lost 4-3 to Astrid Trouwborst in a game where she was well off her best. Saturday’s other women game saw Aileen De Graaf beat Sharon Prins 4-2 in a scrappy encounter.

Back to the men’s, and wins for all eight seeds in the afternoon session set up eight winner-takes-all games in the evening. It turned out that six of the eight seeds went through to Sunday’s quarter-finals with Chris Landman and Willem Mandigers the pair to crash out. The former edged past Martin Adams 5-4 in the first game of the day, but his luck ran out against Wayne Warren who saw off the eighth seed thanks in part to a fantastic 160 checkout, eventually surviving three match darts in the deciding leg to win Group B.

Mandigers knocked Tony O’Shea out in the afternoon session with a 5-2 victory, but like Landman, he fell in the evening, losing to Conan Whitehead by the same scoreline. ‘The Barbarian’ will play two-time reigning Lakeside Champion Glen Durrant in the quarters after he survived an almighty scare from Scott Waites despite averaging around 100 for most of the match. ‘Duzza’ came from 4-1 down to win, not allowing Waites a shot for a 10-darter to win 5-1 and surviving two match darts en route. He still had to beat Gary Robson to progress though, but he did so slightly more comfortably, coming through 5-3.

There’s guaranteed to be some Dutch representation in the semi-finals after Richard Veenstra and Derk Telnekes both won through to the last eight, where they will face each other. ‘Flyers’ comfortably saw off Dean Reynolds 5-2 in the afternoon, before a much more dramatic encounter with fellow Dutchman Wesley Harms saw him survive an incredible nine match darts in the decider before eventually progressing despite averaging more than six points less than ‘Sparky’. Telnekes progressed with the loss of just one leg, beating Martijn Kleermaker 5-1 in a game where the close averages didn’t tell the story. He then saw off an out of sorts Ross Montgomery in the evening to set up that Dutch derby.

Last year’s runner-up and this year’s top seed, Jim Williams, also moved through to the knockout stages with 5-4 and 5-1 successes over the two Jeffreys, van Egdom and Sparidaans respectively. Scott Mitchell is the other name in the last eight after he beat Daniel Day 5-3 to set up a knockout clash with Wouter Vaes. ‘Scotty Dog’ started on fire with an 11-darter but could only follow it up with a 25-darter which completely ruined the averages. Vaes continued to miss chances although the standard did increase from the second leg, but it was Mitchell who came out on top in the end in a deciding leg.

The final day of action sees the men play down from the last eight to the winner and the youth and women’s finals also take place. It all gets underway at 1015 UK time, with Mark McGeeney and Glen Durrant probably playing the best darts of any of the men and set to meet in the semi-finals. In the other half, Jim Williams will be favourite to reach the final again, while Keane Barry could wow us all once more in the youth final, and Lisa Ashton and Fallon Sherrock should produce an absolute thriller ahead of the former’s PDC World Championship debut on Thursday.