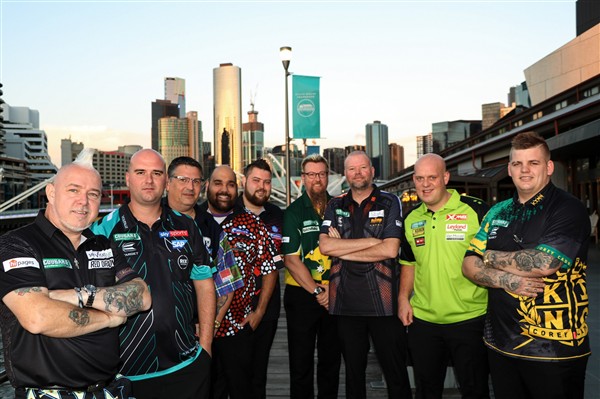 The Australian darters Simon Whitlock and Corey Cadby have been drawn to play each other in the first round of the Melbourne Darts Masters on Friday.

Michael van Gerwen, who convincingly won last week’s World Series event in Auckland throws against first timer Ray Smith. Hard to see past the former two time world champ who is in blistering form. MVG to win this in second gear for me.

But the one I am looking forward to is Simon versus Cadby, the former World Youth champion.

We have not seen Cadby for a while due to his visa issues, so it will be good to see him back in action. I know Gav from DartsPlanet loves Cadby and I think Corey will beat Whitlock this time. He may not have been on our screens lately but Cadby has been honing his skills on the DPA circuit winning a few of the competitions on his home turf whilst Whitlock has been travelling about the world series and pretty much been non stop in 2018 with Premier League, Match play and world series events back to back.

So I give the edge to Cadby as Simon is not getting any younger and like it or not he is not the same Whitlock we saw take on Taylor in the world final back in the day.

Kyle Anderson, the tournament’s other seeded Australian, meets his old junior pairs partner in Damon Heta. Hard to know as outside of Oz we haven’t really heard of Damon.

No beating about the bush here (sorry for the pun) but Kyle has been playing badly in 2018 generally and this would not be a shock to see him put out. He is in real danger of that if he starts badly and doesn’t fire in the 180’s he hits when in form.

Current PDC world champion Rob Cross takes on the New Zealand qualifier Haupai Puha, who makes his big-stage debut in Auckland. How can you bet against Cross here. He wins in a canter, and I fear for Haupai as Rob is relentless.

Tim Pusey has drawn Michael Smith. Again I have to go with the favourite. Michael is honing his craft and I believe will be a real danger in the Worlds this year. Michael stated that he has been back practicing again so I see him hitting most 180s and an easy win in this match Easy decision this Michael in a landslide again.

2018 UK Open and World Matchplay winner Gary Anderson drew Brisbane-based qualifier James Bailey. How can you see anything but a Gary win here. Looking forward to see if Gary reverts to his trusted blue flights but will retain the Noir barrels. Had a funny conversation at the pub and a friend of mine is going to paint his Gary Anderson darts black instead of buying the Noirs… whatever works!

Fellow World Series debutants Mike Bonser and Raymond O’Donnell draw Peter Wright and Raymond van Barneveld respectively. Again go with the favourite here. Barney will do enough to get through the first round but he will get tired or come up with some excuse why he lost his next match. It’s not tiredness Barney, it’s a lack of interest. In my opinion he has become complacent and lost his hunger for darts. Peter Wright to win his first round easy then come a cropper in next round or two. He has become inconsistent. Leave the darts alone Peter…

Following Friday’s first round of the Melbourne Darts Masters, the tournament continues across the weekend, with the quarter-finals on Saturday followed by the semi-finals and final on Sunday.

I expect MVG in the final again but going with a anyone else but MVG win. Don’t know why but I don’t think he is totally on his game even though he won last time out. Likely prove me wrong but that’s darts.