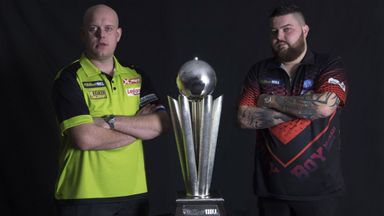 Be prepared for fireworks on New Year’s Day as world number one Michael van Gerwen and Premier League finalist Michael Smith contest in the final of the 26th World Darts Championship.

96 arrowsmiths arrived at Alexandra Palace in mid-December to participate in the £2.5m tournament, and despite shocks occurring and underdogs emerging, we are left with two anticipated finalists, as Michael van Gerwen takes on Michael Smith for the chance to lift the Sid Waddell Trophy and trouser a life-changing £500,000.

Both players will be playing for a very conflicting effect as van Gerwen will be looking to become the first player since the legendary Phil Taylor to lift more than two PDC World Championship titles, while St Helens’ Smith will be aiming to be crowned the World Champion for the first time.

Van Gerwen has endured a barbarous run to the final, facing the likes of back-to-back two-time world champions Adrian Lewis and Gary Anderson, with Smith not having faced any of the world’s top 16 during his route to his first PDC major ranking final.

‘Mighty Mike’ has dropped just five legs in five matches which is phenomenal considering the calibre of players he has faced. Alan Tabern, Max Hopp, Adrian Lewis, Ryan Joyce and Gary Anderson all managed to take just one set off the world number one, hopefully Smith can put the two-time World Champion under some of pressure or else we could be setting up for a one-sided final.

There are no doubts that ‘Bully Boy’ will perform, however, as he comes into the match on the back of a 105.22 average in seeing off underdog Nathan Aspinall. Smith has averaged over 100 in three of the five matches played this year at Alexandra Palace, while van Gerwen is currently undergoing a streak of 18 consecutive ton-plus averages on the World Darts Championship stage.

Smith has defeated Ron Meulenkamp, John Henderson, Ryan Searle, Luke Humphries and Nathan Aspinall en route to setting up what will be a thrilling final at Alexandra Palace.

Have the pair met before in a PDC major final? Yes. Van Gerwen met Smith just six months ago in the Premier League final at London’s O2 Arena. The Dutchman came out victorious on that occasion, as he pulled off a scintillating showing, averaging 112.37 in a 11-4 rout of St Helens’ Smith.

The duo have faced off eight times in the last 12 months, with Smith winning just twice – including a 10-8 win en route to winning the Shanghai Darts Masters in China. Four of those eight encounters have come in the televised majors over the past year; van Gerwen won three times against Smith in the Premier League phase and the pair’s meeting in the Grand Slam of Darts.

It will undoubtedly be a terrific match this evening in North London, and one of which I think could go one of two ways: either Michael van Gerwen to produce a dominant performance and claim his third world title, or Michael Smith to edge past the world number one and pick up his maiden World Championship crown.

Van Gerwen will be looking to become the first player since Phil Taylor to win more than two PDC world titles, while ‘Bully Boy’ Smith will be hoping to join an elite group of professionals that have been crowned champion of the world.

Van Gerwen: “It’s going to be a phenomenal final between Michael and myself, I’ve got a great record against him and I’m looking forward to it.”

“I’m working hard week after week, so I’m glad that I’ve made it through to the biggest match of the year and I need to make sure I perform at my top level.

“To do that I will, as always, need to do the right things at the right moments, and if I play my best game then I win.”

Smith: “I’m now just one step away from living my dream. All tournament I’ve been saying that I want to win that trophy so that it will sit proudly at the top table of our wedding.

“But to do that I know I’ve got to be at my absolute best, I’m going to give it everything I’ve got and keep battling all the way and if I’m finding the treble 20 regularly then I’ve got a great chance of creating history.”