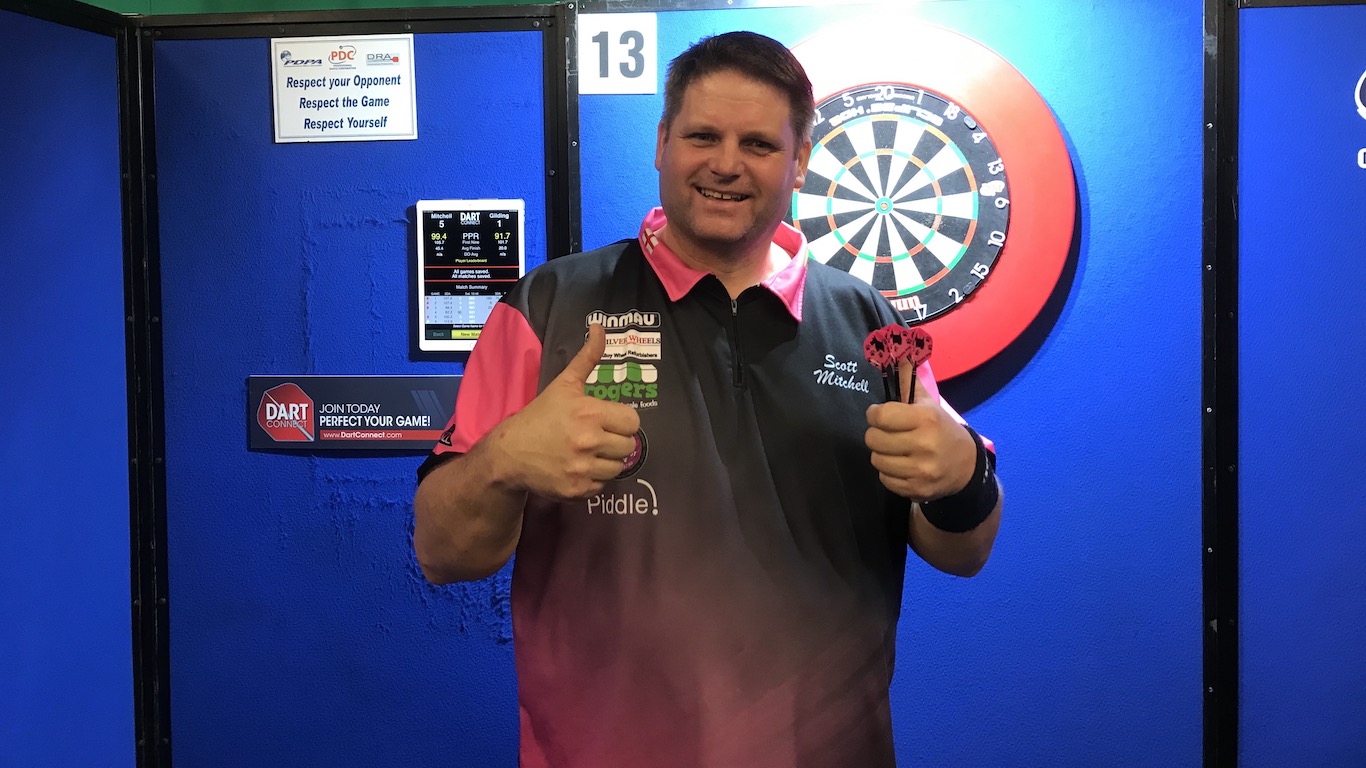 Scott Mitchell and Rob Collins left their Qualifying School woes behind as they clinched PDC Challenge Tour titles at the Robin Park Leisure Centre in Wigan.

Over 1,200 matches were played across Saturday’s gruelling, intense 13-hour long session of play, with proceedings coming to a close less than an hour before midnight.

Both Mitchell and Collins were forced to win nine matches apiece in order to reign victorious in Wigan, with a staggering 342 entrants fancying their chances of Challenge Tour glory.

He got the ball rolling subsequent to a disappointing first ever Challenge Tour event with five maximums and a 102 checkout in seeing off former tour card holder John Bowles, before easing past 16-year-old Brad Phillips.

Mitchell then whitewashed Jonathan Wynn, brushed aside Event One champion Rob Collins with a 102.3 average and saw off Nathan Rafferty to move into the last 16 in Wigan.

A 121 checkout and 95 average saw ‘Scotty Dog’ beat Austria’s Michael Rasztovits and book his place in the quarter-finals, before Cameron Menzies was defeated to nil with the Dorset farmer continuing his blistering form.

Eddie Lovely was in due course added to Mitchell’s scalps as he breezed into the final, and progressed to average just under the 100 mark in beating Suffolk’s Gilding.

Gilding’s hopes of a maiden Challenge Tour title were scuppered for the second time in the space of a year, having been defeated by Cameron Menzies in the Event Six decider in May.

Beforehand, Rob Collins had claimed the biggest  title of his career thus far in defeating Adam Huckvale to claim the opening Challenge Tour title of the season.

Collins, who qualified for the Ladbrokes UK Open last March as a Riley’s Amateur Qualifier, got the better of Philip Wathen, Derek Coulston, Ray Marshall, Lee Smith and Stu Wilson upon making the last 16 in Wigan.

Collins subsequently pinned checkouts of 130 and 140 and five of his eight attempts of the outer ring as he defeated Glastonbury’s Justin Hood, nicknamed ‘Happy Feet’, to seal his place in the final.

The Bognor Regis-based ace led 3-0 following a strong start in the decider, only for Huckvale to claim four of the next five as the match went to a ninth leg.

Collins held his nerve, pinning a maximum to commence the decisive leg as well as a crucial 60 checkout with his opponent sat on a two-dart outshot.

Mitchell and Collins now stand in good stead of making ProTour appearances within the next few weeks as they top the Order of Merit after the opening two events.

Another Challenge Tour double-header will take place on Sunday at the Robin Park Leisure Centre in Wigan, with hundreds of players vying to claim the two titles on offer.