HomeBDOMitchell beats Bennett at Indigo as men's first round concludes 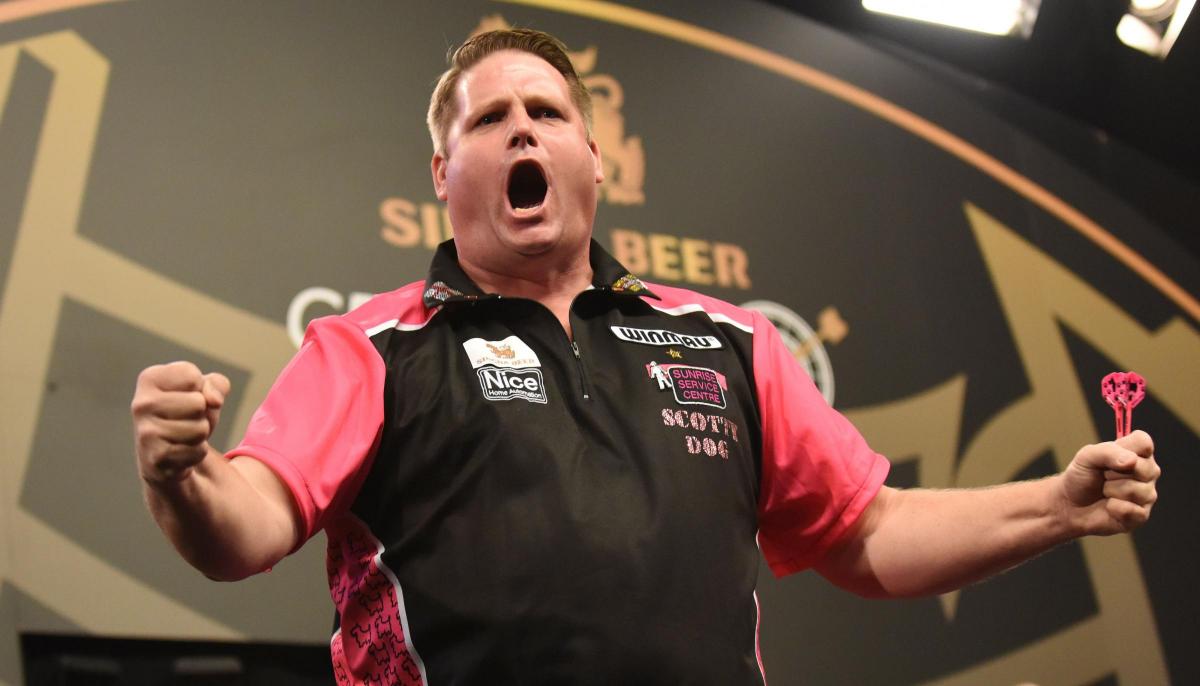 Scott Mitchell denied 14-year-old sensation Leighton Bennett a debut win at the BDO World Championship as Richard Veenstra also progressed at the Indigo at the O2, while Nick Kenny and Gary Robson were both seeded casualties on day 4.

2019 BDO World Youth Champion Bennett failed to get going despite support from the likes of Wayne Mardle and Rob Cross in the arena, and Mitchell capitalised in some style, taking the first two sets in six straight legs with a checkout percentage of 60.

Mitchell’s game then started to slip slightly, and Bennett needed a couple of bites at the cherry but eventually won the third set 3-0 leading to exuberant celebrations. However, the 2015 BDO World Champion saw out the match professionally to book a meeting with two-time semi-finalist Michael Unterbuchner.

Third seed Richard Veenstra survived a big scare against the impressive debutant Justin Hood, who posted a 90+ average for the second successive match. If it wasn’t for missed doubles, Hood’s average would’ve been around the 100 mark and he probably would’ve shocked the Dutchman.

An excellent first set saw the Somerset man come from two legs behind to force a decider, only to squander a dart at double ten and let the Dutch Open champion back in for a set advantage.

Veenstra’s eye-catching display showed no signs of relenting as he took out 127 and 145 in consecutive legs to wrap up the second set 3-0. Consistent high-scoring was giving Hood plenty of chances, and he took most of them in set three to halve the deficit.

A nine-dart attempt for ‘Flyers’ ended in a comfortable hold of throw, which helped him on his way to match darts in the fourth leg of the fourth set. Double one got him over the line for a second-round clash with David Evans.

‘Stretch’ also played on day 4 at the Indigo, and recovered from an uncharacteristically poor first set to level up his match with Nick Fullwell at 1-1. Two-time Challenge Tour event winner Fullwell bounced back in set three to re-take the lead, but Tyldesley’s Evans produced a huge 107 checkout to send it to a decider.

A superb 12-darter sealed the match for Evans, 3-1 in the final set, despite the fact that he won less legs than Fullwell overall, but he won’t care one jot about that after winning his first match in a World Championship.

Elsewhere, sixth seed Nick Kenny was beaten in a good game with debutant Dennie Olde Kalter. The Dutchman won the first set 3-1, before four consecutive 15-darters took the second set to a final leg. Kenny missed the bull for a 170 and Kalter capitalised, doubling his advantage.

The Welshman finally got over the line in a set to make it 2-1, producing some excellent darts on the way to a narrow 3-2 set three success. Kalter missed three darts to throw for the match at 2-2 in the fourth, allowing Kenny to provide us with another deciding set.

Compared to the first couple of days where we saw tiebreaker after tiebreaker, the last two days have only seen one and Kalter helped preserve that record by winning set five 3-1 thanks to an 111 checkout.

Gary Robson’s poor record at the World Championship continued with an agonising defeat to qualifier Ben Hazel, who came from two sets down to win a scrappy game 3-2.

‘Big Robbo’ sealed the first set 3-0, and came from behind in the second to go within one of the last 16, but Hertfordshire’s Hazel punished clutches of missed doubles from Robson to level up at two each.

The 2005 World Darts Trophy Champion had two legs where he could’ve won the match in that leg, but failed to produce anything of note and allowed Hazel back in. The pattern continued in set five, allowing the debutant to set up a game with Chris Landman in the wide open second quarter of the draw.

In the women’s draw, Lisa Ashton produced a solid display against Paula Jacklin, winning all six legs without much fuss and not allowing her opponent a single dart at double.

Anastasia Dobromyslova will play Mikuru Suzuki in the quarter-finals after a 2-0 win over Sharon Prins, but will have to improve her performance almost immeasurably if she is to be the first to beat Suzuki in a women’s World Championship.

The three-time champion inexplicably missed 36 darts at doubles, failing to average over 65 in a match where she will just be happy to have got the job done against a similarly out of sorts Prins.

In the final game of the men’s first round, Ryan Hogarth saw off the challenge of Thibault Tricole, but the first ever Frenchman to play in a World Championship certainly gave him a game.

The Scotsman narrowly won the opening two sets, but Tricole cut the deficit in set three, sealing it 3-1. Despite having the lower average, Hogarth pushed towards the finish line and crossed it with a clutch 74 finish to live up to his seeding and move through to the second round.

Talking of the second round, it gets underway for the men on Wednesday as the women’s first round comes to an end with Lorraine Winstanley and Casey Gallagher taking to the Indigo stage in central London.