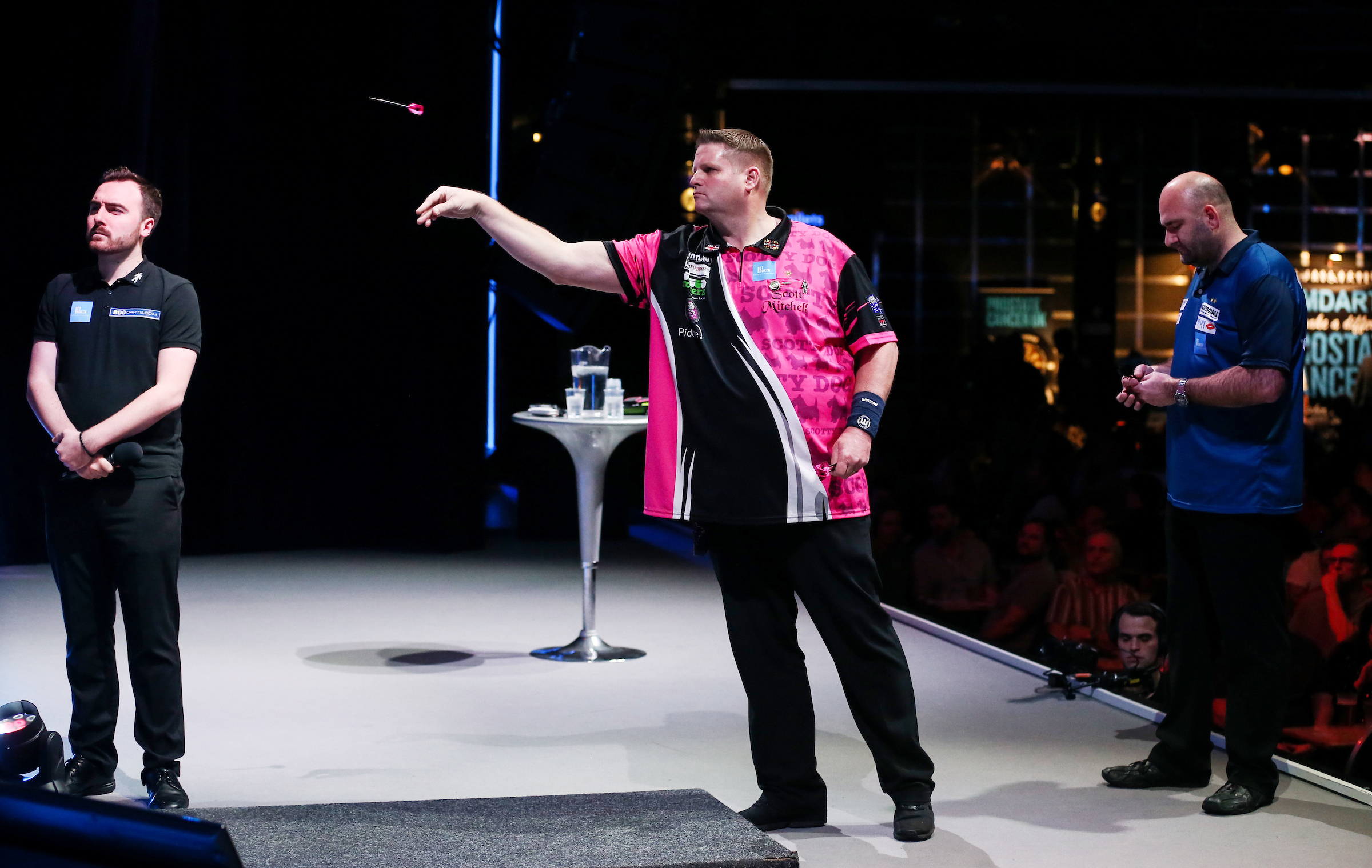 Scott Mitchell squeezed past Scott Waites 5-4 in an Indigo classic to book a semi-final meeting with Wayne Warren, while Jim Williams and Mario Vandenbogaerde also progressed with Lisa Ashton and Mikuru Suzuki setting up a blockbuster women’s final.

Former World Champion Mitchell and two-time Champion Waites went toe-to-toe in a topsy-turvy battle that lived up to its billing and more, both averaging in the low-to-mid 90s and hitting 16 180s between them.

They also both won 17 legs and both hit 17 doubles out of 42. An incredibly consistent standard throughout all nine sets was started with a close opener in which ‘Scotty Dog’ took out 56 for a 14-darter and a 3-1 success.

Waites came right back, averaging just over 100 in set two and wrapping it up in straight legs. ‘Scotty 2 Hotty’ missed three clear darts at double 14 to take a 2-1 lead, a rare occurrence in the match, but returned in the next visit and found it first dart.

Mitchell pegged the Yorkshireman back with another 3-1 set win, before Waites produced a second 3-0 set with just 44 darts to regain the lead.

Arguably the turning point in the match came in the deciding leg of the sixth set, the former Grand Slam champion sitting on 88 for a 4-2 advantage when Mitchell hit a 180 to leave tops. Waites missed the bull to check out and ‘Scotty Dog’ did his job to send it to a best of three.

The Dorset man then won three legs of his own without reply to go within a set of only a second World Championship semi-final, but a stunning 11-darter, the best leg of the match, from Waites, took it all the way.

Mitchell won the first two legs of the final set, but ‘Scotty 2 Hotty’ came back and it looked to be on the verge of a tiebreaker, only for Mitchell to find another huge visit at the most crucial of times, a 140 to leave 68.

Waites missed double 16 just inside for 102, and ‘Scotty Dog’ kept his cool to win an absolute classic and send a packed Indigo at the O2 crowd wild.

He will play Wayne Warren in what will be, slightly confusingly after a late finish, the first game on Saturday after the Welsh veteran survived a slight scare from first-time quarter-finalist Chris Landman to make his first major semi-final at the age of 57.

15 180s were what made the difference for Warren in London, and he took a high-quality first set 3-1 with a 14-darter on double 18. Despite ‘Yank’ scoring brilliantly in spells, Landman wasn’t fazed and levelled up at 1-1, before capitalising on missed doubles to go into the first break 2-1 up in sets.

The Dutchman took a 2-1 lead in the fourth set, only for Warren to equalise before finding a 12-dart leg at the right time. Another 12 in the fifth set was joined by a 13-darter as the man from the Rhondda regained his advantage.

It was more comfortable in set six, although not quite as high-quality, Warren easing to a 4-2 lead in straight legs. He then completely went off the boil, allowing Landman to claw back within one and take the first leg of the seventh.

The 2018 World Championship quarter-finalist then kicked in again, winning two legs in 24 darts, but was still sent to a decider in that set. However, he won it in style after missing handful after handful of match darts in the previous leg.

Later on Friday afternoon, Mario Vandenbogaerde faced a tougher test after only dropping five legs in his first two games. PDC Challenge Tour winner David Evans responded well to losing the first five legs, but it wasn’t enough to deny his fellow debutant a 2-0 lead after the Belgian took out a clutch 124.

Breaks of throw were becoming a theme as the next two sets were both won against the darts, 3-1, giving Vandenbogaerde a lead in sets by the same scoreline.

After two consecutive 17-darters, Evans fired in 3 140s and an 81 finish to move within one once again, and proceeded to level the match for the first time since the very start.

The Tyldesley man continued to show plenty of fight, coming from two legs down in set seven, but ‘Super Mario’ found a last-dart double 8 to move 4-3 up before a quite brilliant eighth set saw him over the line in fine fashion, booking a date with one of the form horses.

The bookies’ favourite, Jim Williams and arguably the star of the tournament so far, Paul Hogan went head-to-head in the first game of the evening, but the match didn’t live up to its billing as Hogan struggled for the majority of the match and the World Trophy champion strolled to a 5-1 win.

‘Crocodile Dundee’ did win the first two legs of the match, but faltered for the next half hour or so, allowing Williams to win nine of the next ten legs without playing his best.

Hogan managed to pull one back, but Williams produced in the big moments from then, a 105 finish in the deciding leg of the fifth set and a 14-darter to win the match doing the job for the Welshman, who’s into the semi-finals for a second consecutive year, this time without Lakeside nemesis Glen Durrant to deny him.

It was semi-finals day in the women’s competition with much of the attention focused on 16-year-old Beau Greaves, who was into the semi-finals on debut after having a sensational year on tour.

Lisa Ashton won all six legs against Australia’s Corrine Hammond to move through to a sixth World Championship final, where she would meet either Greaves or defending champion Mikuru Suzuki.

After a great game, Suzuki kept up her unbeaten record at the women’s World Championship with a 2-1 win. The pair were near-flawless on the doubles in the early stages, but Greaves inexplicably bust 51 by hitting treble 19 with her first dart, allowing ‘Miracle’ to win the first set.

If it wasn’t for that, we probably would’ve been talking about a 16-year-old world finalist, but after Doncaster’s Greaves eased to the second set, Suzuki stepped it up a gear to seal a blockbuster final against Ashton.

In a slight re-jig of the Saturday schedule, young stars Leighton Bennett and Keane Barry take to the stage on Saturday afternoon with the women’s final taking centre stage after the second men’s semi-final, before the men’s final on Sunday evening.