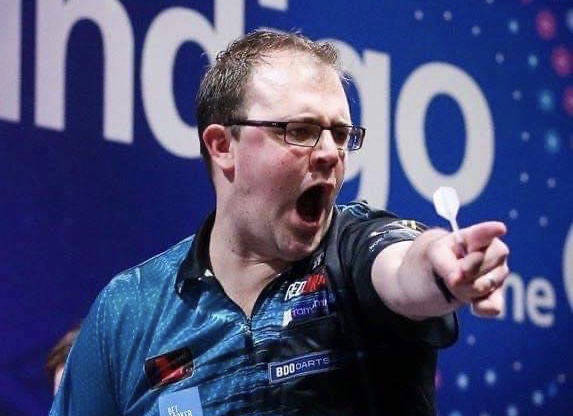 David Evans completed a hat-trick of Modus Icons of Darts Live League titles on Saturday afternoon as the second week of Phase Two action came to a close.

Evans, a BDO World Championship quarter-finalist on debut in January, scooped his third successive title after being crowned champion on both Tuesday and Thursday.

The Tyldesley-based thrower needed more fortunate than usual on Saturday afternoon after finishing level on points with former world youth champion Arron Monk, but claimed the spoils on leg difference.

Really happy to have won the @ModusDarts180 icons of darts live league for a 3rd time this week. Thank you to everyone involved the players and the people behind the scenes. Awesome Job!!

Evans commenced his campaign with an emphatic 4-0 whitewashing of the prodigiously-talented Dutchman Wessel Nijman, despite averaging a mere 83.50 and missing 10 darts on the doubles.

He then produced a remarkable comeback against Monk in his second match of the day, battling back from 3-0 behind and pinning a crucial maximum in the deciding leg, before converting a 73 checkout in two darts.

Adam Huckvale was subsequently handed a 4-1 thrashing by Evans as the former PDC Challenge Tour event winner clocked a 96.74 average, before being given a taste of his own medicine against Darryl Fitton.

Mitchell recorded a breathtaking 105.19 average in a scintillating showing, and numbers which could have been significantly larger if he didn’t squander eight darts on the outer ring.

Evans then returned to winning ways in his culminating clash of the week as he comfortably defeated Paul Nicholson despite being far from his usual sky-high standard.

Evans’ victory hurled the pressure towards Fitton who was his only rival for the title heading into the latter stages, but the 58-year-old’s hopes were short-lived as he lost both his remaining matches with below-par performances.

The most prolific performance of the day came from Mitchell – who recorded a blistering 111.33 average and pinned a 161 checkout in a 4-0 whitewash win over former major champion Paul Nicholson.

The Modus Icons of Darts Live League returns on Monday morning for the third week of the second phase as another two groups of seven players contest a series of matches across six gruelling days.