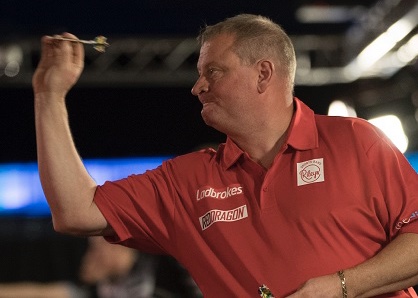 Following the success of Ritchie Edhouse on Monday, ‘Rocky’ rolled back the years, running out victorious in five of his six matches throughout the duration of Day Two.

After previously topping the table during the opening week of the second phase, Jenkins commenced his title-winning campaign with a 100 per cent doubling conversion rate in a narrow 4-3 win over Darryl Fitton.

He then endured his first and only defeat of the day in a 4-3 loss to Jason Askew – who recorded a 96.44 average, before returning to winning ways with a 4-1 win over Devon’s Keelan Kay, pinning a 125 checkout to prevail.

Jenkins subsequently recorded his most prolific performance as he averaged just spare of the 100 mark in a 4-1 rout of former world champion Scott Mitchell, prior to ousting fellow title contender Martin Adams.

Jenkins led 3-1 in the high-quality affair, but a mixture of missed opportunities from the Portsmouth man and clinical accuracy from the three-time world champion forced a decider.

Stray darts then proved costly for Adams and allowed the 2019 PDC Challenge Tour event winner to wrap up a narrow victory on double four, therefore strengthening his hopes of topping the pile.

In the culminating contest of the afternoon, Jenkins thrashed former BDO world champion Mark Webster 4-1 to seal the Day Two title, clocking a 97.08 average and 50 per cent on the doubles.

Webster kicked off the closing leg with five perfect darts and threatened the nine-darter, however, after the Welshman narrowly missed a dart at the bullseye, it was the former England Open champion who got over the finishing line.

Despite converting the highest checkout of the afternoon with a 160 against Mitchell, Webster finished at the foot of the table.

Phase Two of the Modus Icons of Darts Live League resumes on Wednesday morning as Monday’s winner Edhouse returns to action as well as Fallon Sherrock.