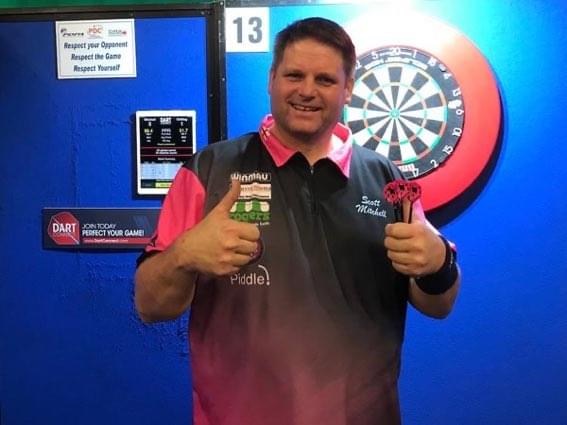 After finishing second best on two occasions since the inception of the third phase at the frontend of this month, Mitchell finally rejoined the winner’s circle with a clean sweep of victories.

In a six-man field which saw generations collide, it was experience that prevailed, with one of the three former major champions on show claiming the spoils from his home in Dorset.

A dedicated farmer by day, Mitchell takes a break from his time working the land in order to compete in the innovative Icons of Darts Live League, and did so with a wealth of success on Tuesday.

He began his bid with a comfortable win over debutant John Brown, pinning a breathtaking 161 checkout on his way to victory, before recording an impressive 97.09 average and 50 per cent on the doubles in a 5-3 win over Stephen Burton.

Mitchell then averaged in excess of the 97 mark once again as he converted five successive combination checkouts whilst beating former World Championship semi-finalist Andy Jenkins.

Heading into the culminating two matches of the afternoon, Mitchell sat firmly in the driving seat, though, former major champions Nicholson and Webster both held a slim chance of snatching top spot.

‘Scotty Dog’ thrashed former Players Championship Finals winner Nicholson to the loss of just a solitary leg, averaging over the 98 mark and pinning five of his eight attempts on the outer ring.

He then sealed the deal with a 5-2 victory over Mark Webster, in spite of only needing two legs to clinch the title due to his much superior +15 leg difference.

Following a heavy defeat at the hands of Mitchell in the culminating clash, Webster finished third in the standings below Nicholson, while Bristol’s Brown endured a winless debut.