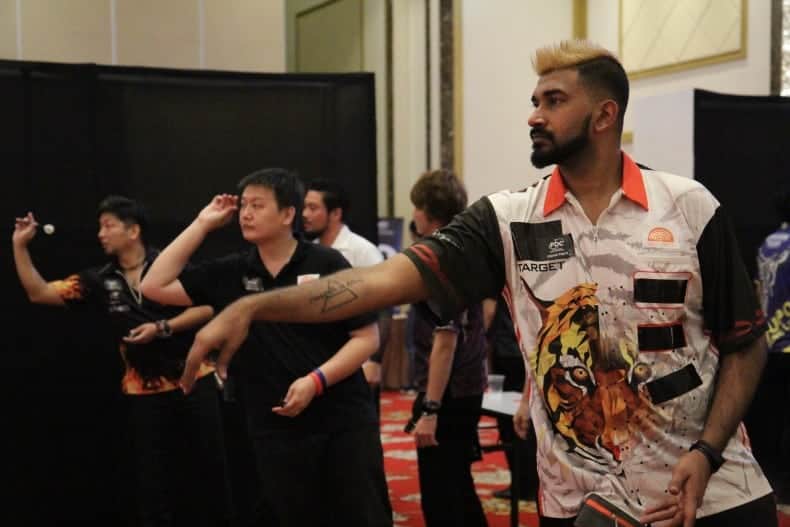 Most of India’s sportsmen come from a cricket background, Nitin Kumar is vying to change that

In a country that is obsessed with a single sport, cricket, the achievements of those playing other sports often remain unheeded, though, that will differ come December 13 as the William Hill World Darts Championship gets underway, with India’s Nitin Kumar among the field.

“My Mum and Dad got into the game through a family friend in Dubai during the late nineties,” said Kumar – who finished in 31st place on the PDC Asian Tour this year.

“I was a kid then and I just picked it up. They kept it from me as my brother and I were pretty notorious so once I got a bit more responsible they handed me some arrows.”

Kumar will solely represent India for a second successive year after he joined Ashfaque Sayed in being of Indian descent and participating at the World Darts Championship.

Despite having lived on the opposite side of the country to India’s so called darting hotspot, Kolkata, since his move across Asia from Dubai, Kumar has in recent years emerged as his country’s most propitious talent.

“Life in India is this chaotic bubble – the reason I say that is darts so happens to be very big in Kolkata. Don’t pay heed to people talking about other places in India where darts is big – there are no comparisons – Kolkata is the hub for darts in India,” he said.

“And with the number of religious festivals that take place, I honestly find it hard for how people get themselves free to participate in tournaments there. In Kolkata alone more than 30 tournaments have been organised this year and there are still a few more in the pipeline.

“While throughout India I would say three tournaments would have taken place at max. The numbers from when I got there in 2015 would have been an active 150. Now it’s close to 700 give or take.

“Club culture is very big in Kolkata and most clubs have darts as one of their extra curricular activities, like snooker. So we have quite a few players from the club circuit and that’s the only place where you can get a drink while playing darts too.

“A total of approximately 3,000 players, if you include the club circuit players – yes, we have decent numbers, but the whole WDF-PDC battle goes on.”

Kumar added: “The WDF affiliated body, AIDA [All India Darts Association], bans any player who is registered with them from choosing to play any open event or event under the PDC banner. Their players never move out and keep staying on in the hope that they can represent their country at the World Cup or Asia-Pacific, while a new body called the IDC [Indian Darts Council] just plays whatever they can and yes, I’m part of the IDC.

“Yes, for darts in India to be made right – the old bodies AIDA and IDF need to be removed, it’s the only way forward. Darts has grown quite a bit since I got to India. Now that I have gotten out of the country, I’m pretty sure that they will manage to make it even better, but that’s something that will have to be seen.”

Living in India has not always been Kumar’s choice of life. He has enjoyed success in both his country of birth and Dubai – where he lifted the Dubai Darts Masters Amateur title a mere three years ago, defeating Alex Dacay in the final.

However, despite currently living in the Middle East, Dubai specifically, he will once again be representing India in London, after averaging 83.64 in seeing off Ravi Bhat in the Indian Qualifier decider.

“It was easier than last year,” expressed the Indian, “but not that the level of the players was low – there was a few players who could play in the 90s and 85-plus brackets.

“But it’s just the amount of experience I have attained throughout the year, playing in most of the PDC Asian Tours and many other tournaments.

“I guess it’s just match experience, and I wasn’t letting this qualifier get away from me, no matter how good my opponent played.”

Kumar notably upped his standard from last year’s qualifying performance, with the opportunity he has received being one not to be passed on.

The decision from the PDC to involve an Indian qualifier once again as of last year’s World Championship came as a surprise to many, in spite of just one Indian having qualified for the tournament.

Congratulations to Nitin Kumar , he will be representing India once again at PDC World darts championship ! Game on @nitintrbkumar @bsd987 @CarlyFletch pic.twitter.com/IDoYYKWAQd

“For me, personally, it just validates what I’ve been saying ever since I turned professional in 2016. Darts is a way of making a living and you have to put in the work because the standards are so very high today.

“Turning professional in darts and actually becoming successful is hard, but it’s a hard life anyway, I’m ready for it.”

The Dutchman sinks tops to complete a 52 checkout and seal a straight sets win over Indian qualifier Nitin Kumar.

'The Black Cobra' will return to take on world champion Rob Cross in this evening's finale!

After making his debut twelve months ago and opening the tournament in a 3-0 defeat to Jeffrey de Zwaan, Kumar will be hoping to build and improve on that marginally disappointing performance.

“I learned a lot from playing on that stage,” he said. “Learning to get acclimatised to the noise is still going to be hard – there were times where I actually couldn’t hear myself thinking.

“But all the opponents are in fact the best in the world so you’re always going to have to play your best. In most instances, even that won’t be enough, but it’s a ladder, and I’ve gotten my foot up one rung, now I have to see if I can go up another.

“There is no substitute for hard work and if I play anything less than my best, I do not expect to win. So that’s what I’ve learnt: don’t come hoping for luck or God to be on your side.”

Obviously within the space of a year, improvement is a necessity and whilst competing on the PDC Asian Tour, participating in events in Dubai and his birth country of India, that has been the case for the 34-year-old.

He added: “I can get into the 100-plus averages and I can get higher than that as well. I play a bad game in the 85-plus range now, so it’s mainly consistency and of course that monster of a stage doesn’t make anything easier!”

Since the PDC Asian Tour’s introduction in the early stages of last year, it’s been a revolution for the sport in Asia. Nine-darters have been thrown on the continent, with adequate amounts of prize money up for grabs as well as the World Championship ticket come the end of the season.

During this year’s campaign, Kumar has compiled a tour average of 79.11 – which places him in the position of 33rd. He has played 125 legs across the year, winning 63 percent of those legs.

“The PDC Asian Tour has been amazing,” Kumar proclaimed. “Yes, it’s hard financially at times to travel for each one but honestly the players there and some of the performances we’ve seen has just been mind boggling.

“It all comes down to one thing – the reason some of our Asian players cannot play their best on the World Championship stage is experience.

“The PDC Asian Tour has been super competitive and I’ve had some of my best performances there, with players like Paul Lim, Lourence Ilagan, Noel Malicdem, Seigo Asada, Royden Lam, Haruki Muramatsu and Yuki Yamada. There are so many more world class players present at every event, and you need to go through all of them in order to climb up that Order of Merit.”

The World Championship is the golden opportunity in the run-up to Christmas for Kumar to showcase his talent. He faced de Zwaan last time around, with Rob Cross awaiting the winner, while now two-time world champion Gary Anderson waits at the finishing line.

Nitin Kumar faces Dolan on Sunday, December 15, as he carries the country of India on his back.