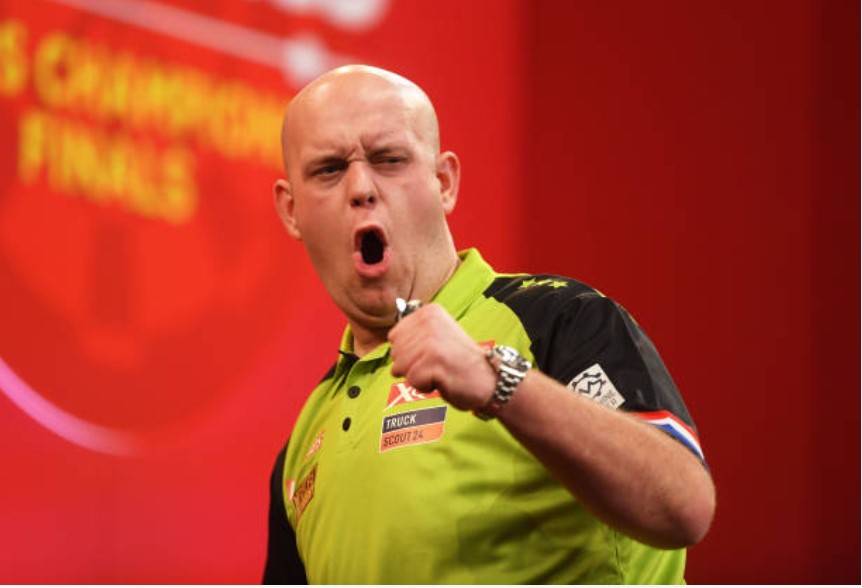 Michael van Gerwen hit the first televised 9-darter in over a year as day two of the Players Championship Finals in Minehead saw a plethora of high-quality matches and the quarter-final line-up confirmed.

With the last 32 and last 16 both taking place on Saturday at Butlin’s, there was always likely to be plenty of darting delights to savour and the ton-plus averages flooded in, Ian White and Stephen Bunting both posting 107s and Mervyn King upsetting Rob Cross with a 105.

The afternoon session got underway as Grand Slam champion Gerwyn Price whitewashed Keegan Brown, James Wade eased past Ricky Evans and Ryan Meikle booked his place in a first ever TV last 16 with a last-leg victory over Darius Labanauskas.

Krzysztof Ratajski was beaten by Willie O’Connor while Michael van Gerwen was stealing the show on the main stage, going 180, 177, 144 for the second nine-darter in the Players Championship Finals before hitting five perfect darts in the very next leg.

However, his opponent Adrian Lewis pushed him all the way to a deciding leg and MVG had to rely on a last-dart double 4 to seal his spot in the evening’s last 16.

Glen Durrant averaged 13 points more than Max Hopp in their meeting but also had to rely on an eleventh leg, and James Wilson came crashing back down to earth after beating Peter Wright on Friday with a 6-0 thrashing by Chris Dobey.

The format increased to the best-of-19 in the last 16 with Stephen Bunting getting the action underway in style, averaging over 110 for most of the match and finishing up with a 10-2 win and an average of 107.03.

He’s into the quarter-finals of the Players Championship Finals for the second consecutive year, as is Chris Dobey who beat John Henderson 10-5.

Gerwyn Price continued his stellar form, posting another ton-plus average against Mensur Suljović and keeping up his superb checkout percentage for the weekend during a 10-4 victory.

William O’Connor is through to his first televised singles quarter-final after a 10-7 win over Gabriel Clemens, while there was yet another high-quality match between James Wade and Michael van Gerwen, the world number one coming out on top 10-6 with an average of 106.

Glen Durrant missed double 12 for a nine-darter against Raymond van Barneveld, but that was a rare high point for ‘Duzza’ as the resurgent Dutchman eased to a 10-3 win to book his place in a first TV ranking quarter-final since the 2018 World Championship.

Ian White and Mervyn King completed the night with two superb performances. Both the World Matchplay finalists of this year were seen off 10-4, Michael Smith and Rob Cross respectively as White and King moved through to third TV quarter-finals of the year, both looking for a first TV semi-final of 2019.

The action in Reds Bar is now over for the weekend with the main arena hosting all of the remaining eight games, including the World Youth Championship final between Luke Humphries and Adam Gawlas.

There’s a real mix of names left in the tournament as the final event before the World Championship concludes with a fascinating final day ahead.