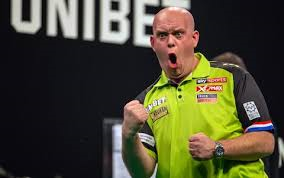 MVG Admits To Lack Of Hunger

Michael van Gerwen has discussed his recent dip in form with a publication in his home country.

van Gerwen hasn’t posted a 100+ average in his last eleven matches, which is alarming form ahead of the World Matchplay, an event that the Dutchman remains favourite to win.

”There is not really one reason. It’s not possible to perform well at every event, that’s the start. Maybe I became a bit less hungry. Just a little less focus, that has crept in.”

”But now I’m with my feet on the ground again. Especially when you lose 6-5 to Martin Schindler at the German Darts Masters after being 5-1 up. I was really p**sed off after that match. But disappointments makes you stronger. When I just joined the PDC, I also had a slip of form for a long time. I ended up very well with that and that gives me confidence now.”

MVG also pointed to a lack of hunger lately, with old rivals such as Phil Taylor, and prime versions of Raymond van Barneveld and Gary Anderson currently lacking.

”I do miss the people with who I can have a real battle. Phil has retired, Raymond moved down on the rankings and is going to retire, while Gary is not playing many tournaments anymore. Maybe I have to get used to that. That I have to get even more motivation out of myself to find that additional gear again.”

van Gerwen aims to win the Matchplay for the first time since back to back wins in 2015 and 2016, and will definitely look to improve on his shock first round exit to Jeffrey De Zwaan in last years event.

”The last two years I have performed badly there (Blackpool)”, the world number one admitted.  Do I complain about my difficult draw? Nah, that was also the case with the World Championship and I won that tournament.”

”Look, when I’m really good, then almost nobody is going to beat me. I know that, and they know that as well. I just have to show it more often”.

Kleermaker Hits Out At BDO Chairman