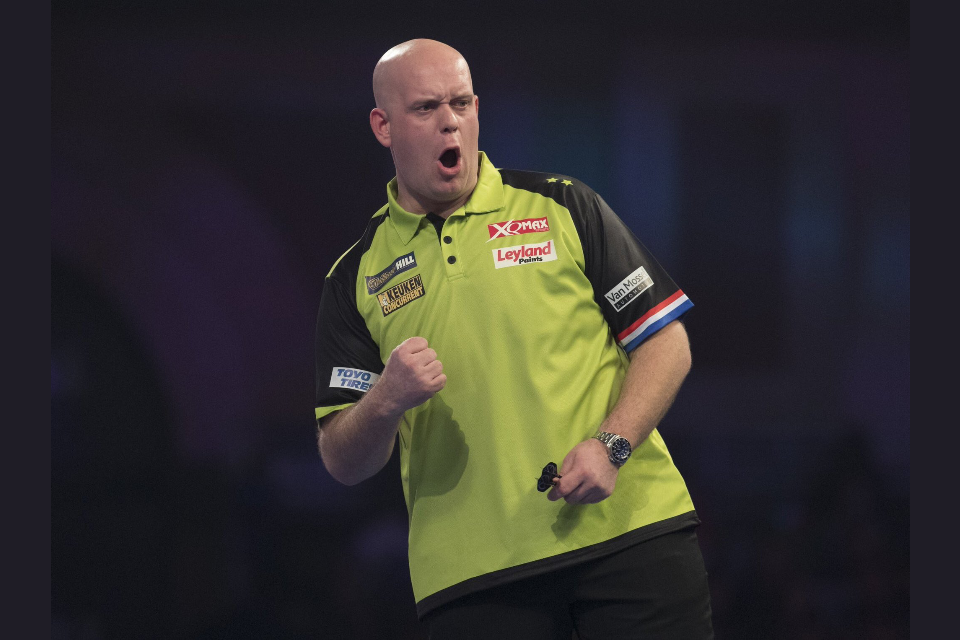 Michael van Gerwen and Gary Anderson set up a dream semi-final as they came through quarter final matches against Ryan Joyce and Dave Chisnall. Michael Smith and Nathan Aspinall both won through to make their first semi final appearances.

The opening quarter final was between two players making their first quarter final appearances, as Nathan Aspinall took on Brendan Dolan. It was Aspinall who got off to a fast start, breaking Brendan’s throw in the opening leg before holding to lead the set 2-0. Brendan left 40 after fifteen darts but missed three darts at double, allowing Nathan to hit double 4 and take the opening set. The first three legs of set two were held on throw, with Nathan leading 2-1. Aspinall gave himself a shot at 73 for the set, but missed a dart at tops allowing Brendan to set up an important deciding leg. However, Nathan showed real quality in throwing a 15 dart leg, checking out 68 to lead the match 2-0. Brendan had not settled fully, and Nathan kept going, winning the next set brilliantly 3-1, the only leg Dolan won was an 11 darter as Aspinall led 3-0. The opening three legs of the fourth set went on throw, as Nathan once again led 2-1. With a 14 darter, Aspinall moved within a set of the match, leading Brendan 4-0. Nathan showed his first signs of nerves as he missed three darts at double in the opening leg of the fifth set, allowing Brendan to hold and lead the set 1-0. With excellent legs of 12 and 16 darts, Brendan got a set on the board to the delight of the Ally Pally crowd. The first three legs of the next set were on throw, with Aspinall leading 2-1. With an excellent 96 checkout, going 20-double 18-double 20, Nathan booked his spot in a World Championship semi final with a 5-1 win over Brendan Dolan. It was a superb performance from the man making his debut, with an average of 99.72, 41% on doubles and five 180s.

The second quarter final was the eagerly anticipated clash between Gary Anderson and Dave Chisnall. Anderson had come through deciding sets against Jermaine Wattimena and Chris Dobey to get here, while Chisnall had fought back from 2-0 down against Josh Payne in Round 1, before whitewashing Kim Huybrechts and Jamie Lewis. Gary blitzed threw the first set with minimal fuss. He held his throw, before firing an 11 darter to break Chisnall and holding on tops to close out the set. The first two legs of the second set were shared, with Gary breaking in the third leg on double 20. Anderson fired in a maximum in the next leg to throw an 11 darter in double quick time and lead the match 2-0. Gary took the opening two legs of set three, before Chizzy took out a magnificent 121 on the bull to save the set and get the crowd on his side. Dave took out another huge checkout, this time 112 to level the set at 2-2. However, Gary fired in a superb 14 dart leg to smother Chizzy’s momentum and lead the match 3-0. Anderson fired in two legs in rapid time to lead the fourth set, but Dave fought back, hitting double 19 before levelling the set on the madhouse to set up a huge decider in the set. In a dramatic leg, Gary missed a dart at double 9 for a 138 checkout, allowing Chisnall to nail double 10 with his last dart to put a set on the board and get into the match. The opening two legs of the fifth set were shared on throw, with Gary then taking out 115 to lead the set 2-1. Anderson took out a terrific 130 finish on the bullseye to win the set and make it 4-1, going within one of the match. The first three legs of the set went on throw, with Chisnall leading 2-1. In the next leg, Dave fired in a maximum to leave 161 before he missed a dart at the bull for the set, allowing Gary to set up a decider. Dave fired in a superb 14 dart leg to save the match and potentially get himself back in the game. The first two legs of the next set were again held on throw, with Dave firing in a 140 checkout. Anderson threw a crucial 80 finish to go within a leg of the match, but Chizzy hit back with an impressive leg of his own to set up another deciding leg. This time it was The Flying Scotsman’s time to finish the job, throwing a 171 before taking out 48 to finally see off Dave Chisnall by a scoreline of 5-2.

The evening session opened with a tie between Luke Humphries and Michael Smith. Humphries was full of confidence, off the back of defeating 2018 world champion Rob Cross in the previous round. Smith had dispatched of Ron Meulenkamp, John Henderson and Ryan Searle with tremendous displays, and was the favourite on his half of the draw to make the final. Smith broke Humphries’ throw in the opening leg, before missing 6 darts at double, allowing Luke to break straight back. ‘Bully Boy’ fired in another decent leg to break again, before checking out 117 on tops to take the opening set. Smith held to start the second set, before breaking Humphries again with a 15 dart leg. He closed the set out on double 5 to lead Humphries very comfortably 2-0. Luke came out fighting after the break, holding his throw first, before smashing in a huge 170 checkout with Smith waiting on 40. He finished the set with a magic 12 dart leg to get himself right back in the game. The first two legs in the fourth set were shared, before Smith held to lead the set 2-1. After Humphries failed to finish 80, Smith swooped to finish double 10 and regain his two set advantage. Cool Hand Luke began the next set with a terrific 151 finish to hold, but Bully Boy hit straight back on tops. In the next leg, Smith missed 5 darts to break Humphries’ throw, with Luke punishing to lead the set. Michael hit back with a 13 darter to set up a hugely important deciding leg. With a superb 11 dart leg, Smith broke Luke’s throw to win the set and lead 4-1. Humphries broke Smith’s throw in the first leg of the next set after Michael missed numerous darts at double. However, Luke’s advantage did not last long as Bully Boy broke straight back with an 11 dart leg. Smith held on tops to go within a leg of making the semi-finals, and duly finished the job with a brilliant 87 checkout. Smith ended with a 103 average and a 5-1 win to end Luke Humphries’ dreams and book a tie with Nathan Aspinall in the last 4.

The final quarter final was between the odds on favourite for the World Championship Michael van Gerwen and the Newcastle man Ryan Joyce. Joyce had defeated the likes of James Wade and Simon Whitlock en route, while Michael had dispatched of Adrian Lewis, Max Hopp and Alan Tabern. Michael flew out of the traps, taking out a 92 checkout in the opening leg to break Ryan’s throw, before solidifying his throw in 13 darts in the next leg. He took out 60 to take the opening set 3-0 against the darts. Michael won the opening two legs of the second set as well, before Joyce finally got off the mark with a fabulous 126 finish after Michael missed a set dart at double 18. However, van Getwen was not to be denied the set, taking out 121 to lead the match 2-0. Mighty Mike broke Ryan’s throw in the opening leg of the third set but Joyce was not to be denied, firing in a 14 darter on double 16 to break straight back. Relentless Ryan held his throw with a 13 darter to go within a leg of the set. Michael held his throw to set up a crucial deciding leg, where Ryan found himself on 66. He went 2-14-bull to sent the crowd into raptures and make it 2-1 and avoid the whitewash at the very least. Joyce continued the momentum by breaking the MVG throw with a superb 72 checkout on double 16, and held the next leg with a 33 finish. Michael van Gerwen stopped the rot on double 16, but Joyce had the darts to level the match. However, Ryan did not get a chance as Michael threw an 11 darter to level the set. Van Gerwen showed real quality to take the leg in 13 darts to take the set, stop Ryan Joyce’s momentum and lead the match 3-1. The opening two legs of the fifth set were shared on throw, before Michael fired in a 13 darter to break Joyce’s throw and go within a leg of the set. He finished the set comfortably on double 8 to lead Ryan 4-1. Van Gerwen held throw to start the next set, before Joyce nailed a 122 finish to level the set. However, MVG was not to be denied, throwing a 13 darter on double 18 before finishing Ryan Joyce with a 25 finish. Michael ended up with a comfortable 5-1 win to set up the game the whole world wanted to see, Michael van Gerwen against Gary Anderson on Sunday night.

Van Gerwen: ‘I need to make sure I’m sharp’