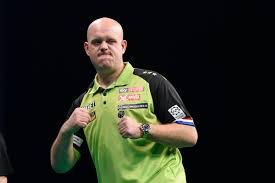 MVG scrapes through with seeds scattered at Glaspalast

Michael van Gerwen extended his unbeaten streak on the European Tour to 16 games after a closely-fought battle against Brendan Dolan as the 2019 European Darts Grand Prix continued at the iconic Glaspalast in Sindelfingen.

It looked for large portions of that match as if the World Champion was going to become the latest big-name casualty on day two, but resurrected the situation late on to come through an incredible 26th consecutive last leg decider on the Euro Tour. In addition to the withdrawal of 10th seed James Wade, seven other seeds lost their first match with the highest profile of those being world number two Rob Cross.

Amazingly, ‘Voltage’ is still yet to win a European Tour title and that wait will have to go on for at least another two weeks. He beat Jeffrey de Zwaan at the second round stage in Graz, but when a rematch was presented, he failed to get over the line as an impressive De Zwaan kept the former World Champion at arm’s length before eventually taking a ridiculous last leg in 29 darts to move through to the final day of action.

It will come as a surprise tomorrow that De Zwaan’s game against Michael Smith tomorrow will be his first ever on the final day of a Euro Tour. Although ‘The Bullyboy’ is well-versed in those scenarios, he hadn’t made one yet in 2019, until Sindelfingen. His meeting with Krzysztof Ratajski lived up to the high standards of their clash in Leverkusen, and Smith managed to survive a comeback from ‘The Polish Eagle’ and cash on the continent for the first time this year.

Two other top-eight seeds fell at the last 32 stage, namely Adrian Lewis and Mensur Suljović. ‘Jackpot’ didn’t do a whole lot wrong against Jamie Hughes, but was on the wrong end of a stunning display from ‘Yozza’, which included a missed double for a 9-darter. The Tipton thrower ended with an average with just under 104 and will also make his debut in the last 16 of a European Tour tomorrow.

Suljović gave himself enough chances to see off Steve Beaton, but the ‘Bronzed Adonis’ is looking good for back-to-back quarter-finals in Europe after coming through that one in a decider. He will play Ryan Searle, who benefited from James Wade’s withdrawal, while there will be another clash between two unseeded players as Hughes faces fellow ex-BDO star Mark McGeeney. ‘The Gladiator’ called it ‘the biggest win of his career’ as he took out 135 and hit 50% of his doubles in a narrow win over Joe Cullen.

The afternoon session saw impressive displays from Gerwyn Price, who averaged 103.41 in a 6-1 success against Euro Tour debutant Gavin Carlin, and also James Richardson, who weathered an early storm from Mervyn King to come through that one 6-3. ‘Ruthless’ sets up a date with the world number one. The last remaining home hope in Sindelfingen, Max Hopp, saw his last seeded spot on the European Tour for a little while at least end with an early exit at the hands of an in-form and very dangerous Nathan Aspinall.

The UK Open Champion faces a mouth-watering clash with Daryl Gurney on Sunday, who won the last four legs against Chris Dobey to squeeze through. It will be a very familiar feeling for ‘Hollywood’ around this time of year, who has narrowly missed out on the final day of the last two Euro Tours, which would have put him in a great position to make a debut at the World Matchplay in July – a tournament he has agonisingly failed to qualify for before.

Champion two years ago at the Glaspalast, Peter Wright will be hoping to be inspired by the home of the European Tour this weekend, and it nearly all went wrong against another debutant in Niels Zonneveld. The Dutchman was averaging significantly lower than ‘Snakebite’ but ended up missing two darts to give himself the chance to throw for the match. Wright progressed 6-4 in the end and will take on Jonny Clayton in the last 16.

‘The Ferret’ finally won on a Saturday on the continent courtesy of a 6-4 win over Ross Smith. Elsewhere, Keegan Brown beat Ricky Evans 6-2, Ian White saw off Dimitri Van den Bergh 6-5 and Darren Webster edged past Vincent van der Voort by the same scoreline. 16 players will be in pursuit of the title on Sunday with £25,000 up for grabs as the race for qualification for major tournaments also continues. MVG is the man to beat having seemingly got his ‘off game’ out of the way, but there is plenty of talent left who can deny ‘The Green Machine’ a fifth Euro Tour title in six attempts this year.

NB: James Wade’s withdrawal meant that Ryan Searle receives a Bye in the second round.