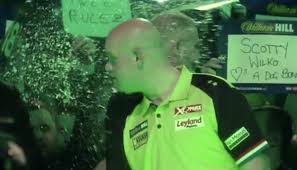 There are people who are not over keen on Michael van Gerwen, but this is never spiteful, that I can make out. It’s just that some people get fed up with him winning all the time.

People tend to root for the underdog, and let’s face it, how often is MVG the underdog? So there are some who want to see him lose.

Last night, it would be a stretch to imagine anybody not liking the guy for the way he responded to a disgusting attack which was fortunately dealt with professionally by the PDC and their security staff.

There’s no sense in dwelling on the beer throwing, it is likely it was a one-off and as Michael said there are always stupid people and they would probably regret it in the morning. Let’s hope they do.

But that he said this shows his true class as a man and not just a darts player. Banning people for life when they behave like this is right. Hating people for life is a waste of time, and we have to get back to business as soon as possible.

Michael could have lost last night. He could have taken it personally and let it get to him, I know I would, and many other people would too.

He didn’t! He got on with the job and was graceful in victory, paying tribute to his opponent’s class and any other player he might meet along the way. He was asked to talk about the incident and took it in his stride, no recriminations, no anger, no tears, no complaining.

Let’s say he’d lost and then blamed being covered in beer as an excuse. That might have seemed reasonable, it was a ridiculous thing to happen, it would upset most players, and that so-called fans even think about doing it, let alone actually going through with it, shows the gulf in intelligence that still characterises society.

What we want is a class darts tournament whoever wins, with high averages and big checkouts, with maybe a few suprises along the way.

If one or two idiots seem set on ruining that, then we can be only too grateful to MVG for not letting them.

Brown impresses while van Gerwen eases through despite unsavoury scenes