HomeBlogMVG Survives A Scare As Seeds Advance At Grand Prix 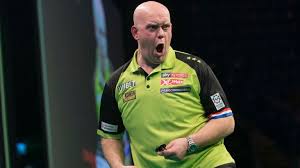 MVG Survives A Scare As Seeds Advance At Grand Prix

The BoyleSports World Grand Prix kicked off with eight first round matches at The Citywest Convention Centre in Dublin.

Defending Champion, and world number one, Michael van Gerwen survived a scare before eventually coming through 2-1 against Jamie Hughes.

After levelling matters at one set all, van Gerwen was in real danger of elimination, but saw Tipton’s Hughes miss two crucial darts at double to move 2-0 in the decider. In the third leg of teh final set, Hughes landed a 160 start and a 180, but missed a chance at a nine darter, and then watched “MVG” crashed in a 135 finish on the bull, before double 18 secured the Dutchman’s safe passage into round two.

There he will meet Jeffrey de Zwaan who breezed into round two with a 2-0 victory over an out of sorts Steve Beaton.

The Dutchman dropped only one leg in the match, and was solid on the strating and finishing doubles to book his place in the last 16.

There were also no scares for Gary Anderson, who dropped ony two legs in a routine 2-0 win against Keegan Brown.

The two time World Champion now meets Chris Dobey, who kicked off the tournament with a comfortable straight sets win against Ricky Evans.

Bedlington based Dobey levelled the first set at 1-1 with a two dart 90 finish on double 15, broke Evans in the next leg, and took the set on double 16.

Evans was made to pay for failing to hit a starting double with regularity, and Dobey took full advantage of this, closing out the match on tops to clinch a place in round two on his debut.

2012 runner up, Mervyn King moved into round two with a gutsy display to overcome Dimitri Van den Bergh in a deciding leg shootout.

King landed a 174 in the opening leg to leave double 8, which he duly dispatched in one dart. The Belgian responded with a 112 checkout to level the set, and although he landed a 180 in leg three, King held firm on tops to regain the lead. The Bradwell man missed a dart at double 16 for the set, and in stepped Van den Bergh to check out 70 to level once again. Van den Bergh missed three darts to start the deciding leg, and King took the initiative with a 180, and missed double 4 for a 128 finish. Dimitri piled the pressure on with a 180 of his own, and King slipped into double 18 aiming for double 1, and the 25 year old made no mistake, finishing 105 on double 16 to take the set, much to King’s annoyance.

King nailed a 120 outshot to level set two at 1-1, and landed double 8 to finish 25 to break. He then levelled the match with double 16 to take the set.

Van den Bergh responded by breaking immediately in the decider on tops, and forged further ahead on double 16 to go within one of the finish line. King clung on with a 180 and tops to finish 220 in four darts, and hit another 180 in leg four, and then majestically took out 133 on double eight to force a decider. An inspired King hit a 140 and then left 32 from 160, which he pinned first dart to reach round two.

King’s last 16 opponent will be James Wade, as the two time former Grand Prix winner scored his first win in Dublin for five years with a 2-1 win against John Henderson.

A 142 finish, and 8/13 on the finishing doubles were the highlight for the Aldershot ace. Despite a wobble in the third set, Wade took the deciding set without reply to advance.

Cullen broke in the very first leg, and bossed the set, affording White just a solitary dart at the bull as he mopped up the set without reply.

The Bradford man wasn’t letting up, and a 74 finish gave him a 2-0 lead in the second set. White fended off the whitewash with a crucial 82 finish on tops to stay alive with a break of throw, and then made it back to back 82 finishes to level the set. Cullen then missed three darts to begin the leg, and White took full advantage of his opponent going off the boil to finish 44 to level the match.

Cullen missed three darts at double 10 to level the deciding set, and White stepped in to move 2-0 ahead. The Stoke thrower missed eight match darts, with Cullen missing four to save it, before White pinned double 2 to advance.

Michael Smith also survived a scare before finally overcoming Simon Whitlock 2-1 in the deciding leg of the contest.

The Aussie was made to rue six missed darts in the final leg, and also Smith taking out crucial 155 and 128 finishes, as the St Helens man pinned double 16 to go through.

Hutchinson does double as McKinstry and Barry also triumph in Newry