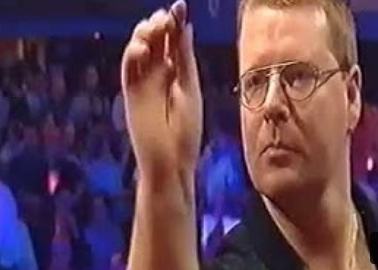 My dart mentor throwing the quarters against barney back in 2003

Never met a more inspiring guy in darts. Back in 1993 when I only was 10 years old I met Erik. Ever since he learned me how to play darts. He was well known on the BDO circuit as the human calculator and his crazy finishes. He fooled the camera man and commentators plenty of times with his weird checkouts.

But after all he was a very great guy that put lots of time in young kids like me and learn them how to play darts. I always dreamed to play him on the circuit but faith decided otherwise.

In 2006 while doing his day job as a construction worker he fell off a ladder and broke his throwing arm. After 11 surgeries he gave up his dream to continue on the circuit. But ad dedicated he was he started practising with his other arm and started winning games again in the Belgian leagues but unfortunately never was able to improve again to compete on the big circuits.

I met him a couple times after the accident and hopefully I can show him once that all his time he put in me was all worth it.