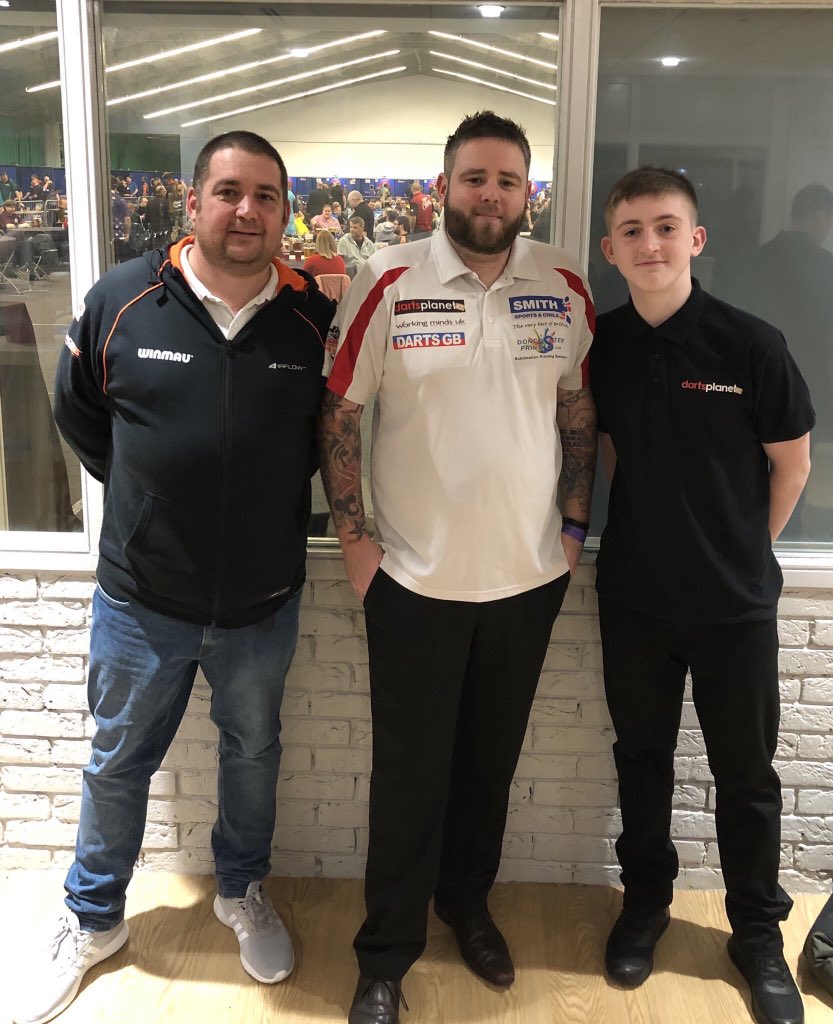 I arrived at the venue at 8am to register along with Jason, his mate Darren Hampton and fellow Darts player Ian Withers. I walked into the dart room where the action would take place and I’ve never anything so spectacular! All the players were warming up and I took my coat off and had a little walk round with Darren to watch a few high-profile names preparing for the event.

The Event began at 10:30am where Tournament Director Keith Bisby announced who was playing on each board first and who would throw first for the Bull. The action began and there were early exits for the likes of Scott Waites, Jamie Caven, Anastasia Dobromyslova and Jim Williams who lost out in a last leg shoot out to Andy Boulton. The likes of Wes Newton, Glen Durrant and Nathan Rafferty all had comfortable first round wins and Lisa Ashton, in her second match of the day, averaged 106 defeating Brian Hallas which ended up being the highest average of the day.

As a tournament went on, big names were departing the likes of Kevin Painter, Robbie Green, Peter Jacques and Barrie Bates, who lost out in a last leg decider to Glen Durrant averaging 98.6 in the Last 128. Moving into the Last 16, there were still high-profile names in Glen Durrant, Lisa Ashton, Andrew Gilding and David Pallett left in but only two of them progressed to the Quarter Finals and that was Durrant and Pallett, both in the same half of the draw.

So, moving into the Quarter Finals, the first man through to the semi finals was Gavin Carlin defeating Martin O’Boyle 5-2 averaging 88.2. Joining him soon after was Superman Matt Clark defeating James Kempster in the last leg decider after the pair averaging over 90. In the top half of the draw, Glen Durrant charged to a 5-2 win over John Bowles averaging 97.5 and joining him in the Last 4, was Reece Robinson who defeated David Pallett, after the pair both missed match darts, but Robinson came through a 5-4 winner.

So, we had our semi-finalists, whatever happened in the deciders, it would be a dream day for all of them. Matt Clark and Reece Robinson, both aiming to win back their tour card and Glen Durrant and Gavin Carlin, aiming to with a tour card for the first time. Firstly, the first semi final was between Matt Clark and Gavin Carlin, were Matt stormed into a 4-0 lead and looked no way back for Gavin when in the fifth leg with Matt sat on 36 for the match, Carlin takes out 72 on tops to save the tie and then in the following leg, takes out a 161 which was the highest checkout of the match to make it 4-2. In the seventh leg, Matt kicked off with a maximum followed by a 140 then a 135 so looked no way back for Carlin and then Matt stepped up for the match on 46 and took it out in two and secured his tour card for the next two years. In the second final where there was a larger crowd around as Durrant was a heavy favourite to win a tour card outright coming into Q School this year. Robinson took out 122 on throw in the opening leg and from then on, the pair kept holding their own throw when then in the sixth leg, Durrant was sat on 36 for three a piece and Robinson took out a crucial 116 checkout to make it 4-2 and looked no way back for Duzza. In the seventh leg, Durrant missed two darts to make it 4-3 and then Reece stepped up for 16 and took it out in one to cause a big upset meaning Durrant has to do a lot on the final day.

So that was my day at Q School, really enjoyed myself and congratulations to the two winners Reece and Matt and I’m looking forward to heading back on Sunday for the fourth and final day of Q School for 2019 where it will be a nervy day ahead around Robin Park Leisure Centre!