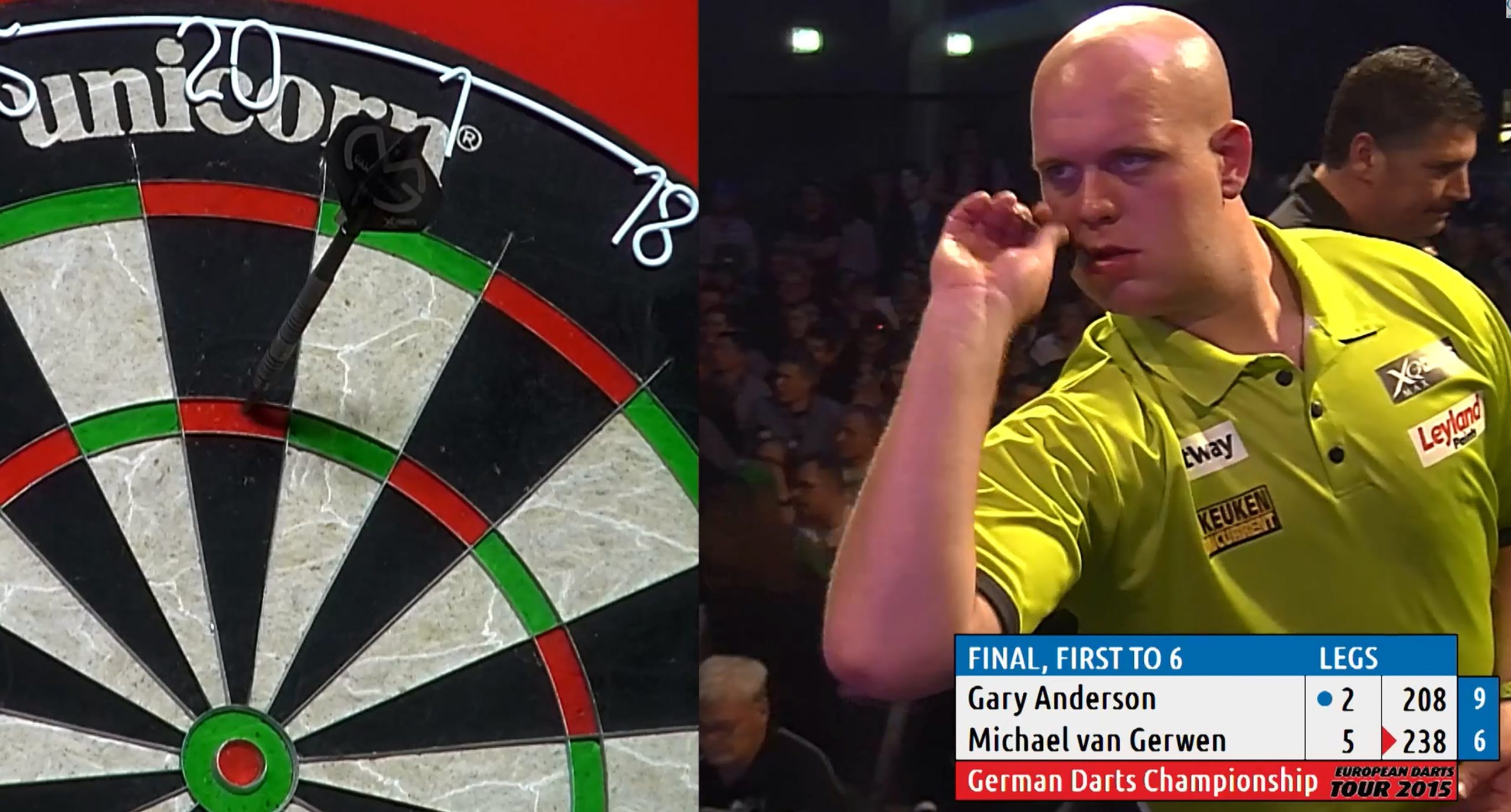 I don’t know it Gav from this site was one of the ones who voted YES in my Twitter poll when I asked if England could win the World Cup, but by now it’s all academic. Anybody who voted NO was right and anybody who voted YES was close enough. It was a decent showing, and although we should not get carried away, we had every right to enjoy it as far as it went.

But do Gav and I always agree on darting matters?

Maybe not about every last thing.

However his recent video introducing his choice of the top ten players in the world at the moment was pretty much spot on, as far as I am concerned.

So do I really need to write my own list, if you have already seen who I regard as the best from Gav’s own contribution?

No, but I am going to anyway. In any case, there are a couple of players where we differ.

So, MVG, and who can disagree with me on that? Granted, not everybody is an MVG fan and some get fed up with him winning all the time, but if they acknowledge this, are they not covertly accepting that he, er, wins all the time?

To be frank, if you follow darts (which I guess you do – if you are reading this) then you are probably in no doubt as to the Dutch lad’s superiority. Michael may lose sometimes, but generally only to himself because at his best he is as unstoppable as his confidence suggests he knows he is. While people may debate who of Ronaldo or Messi is a better player, is there any point in contrasting the merits of Mighty Mike with any other player currently on the Order of Merit? I say, let’s not waste our time.

As for the second best player, Gary Anderson, when in the mood can only really be stopped by MVG and even then that not all the time. Ando is a hugely talented professional who when up for the scrap can produce scoring and finishing that few can match.

Quite why Gary does not win more is a question for him, and one which people would not ask anyway because of the respect they have for him, he is a hugely popular player because of both the entertainment he brings to the hard-working paying public who want to see top quality darts, and the dignity he plays with.

At number three I have Frosty the Throw Man whose stunning regular nine-darters and averages of close to 132 make him a top attraction for anybody who knows I am taking the mickey here. I predict a bright future for the scaffolder from The Potteries.

In my real third place I would put Rob Cross a smidgen ahead of Peter Wright, who is obviously my choice for fourth, when you consider neither of them have had a top year but have held their own throughout a tough and highly competitive season, with a few notable exceptions, namely Snakebite in the Premier League. From my distant location I rely on Youtube to watch darts and I would say that Rob Cross seems to come up on the screen more than Peter Wright when I simply type ‘Darts 2018’ trying to get videos of the latest matches. No, Youtube proves nothing, certainly not a random search, but I would say that Cross has been slightly the better player on balance in 2018, and on the back of his stunning win in the worlds, it was always going to be a stiffer challenge for Voltage.

Fifth place, in an ideal world, would be me, but I just can’t hack it on the big stage (or on any stage for that matter, even playing alone in my own house) so I have to give way and hand this spot to Michael Smith mainly for his performance in the Premier League which showed his class and also marked his arrival on the big stage at a level which corresponds with his ability and potential. I don’t see Bully Boy as a Top Ten player alone but as a Top Three player and I hope he continues to perform to this standard into the future. While MVG is still playing, I can’t see him topping the rankings but why shouldn’t he get to second? He is good enough.

Daryl Gurney would be my sixth pick. Solid and dependable yet not quite when it comes to the biggest games (Grand Prix excepted), which deserves a place high up the rankings, a place where millions of darts players can only dream of reaching, meaning that this blog would be incomplete without his name included.

Mensur had struggled a bit but recent victories and improved play see him consolidate his place on the OOM and in the minds of the fans as a top player, rather than an OK player who got lucky last September. Having said that, he has not seemed quite the player he was almost a year ago and few tip him to repeat the feat as autumn draws near. I doubt few would have him outside their top ten, although some may put him lower than seventh, something I may not argue with.

Barney is probably in eighth spot here against the judgement of many serious darts fans, because apart from the odd decent showing, he has just not quite managed to produce his A game this year and in essence, could maybe consider himself lucky to be one of my choices – if what I think matters to him 🙂 But this is RVB, one of the most popular players ever, and not just for his darts. He is like everybody’s favourite uncle who always brings sweets and who makes you feel happy when he shows up, the one you associate with that warm Christmas feeling of homeliness and fun. Darts without RVB would be like Christmas without turkey (and I write this as a vegetarian) and I simply cannot leave him off because there is more to darts than consecutive 180s and he makes the game more enjoyable to be involved with. And hey, he is a top ten player anyway.

I haven’t checked the updated OOM for a while, which to my shame perhaps rules me out of making any seriously objective analysis of Adrian Lewis’ improved showing this year, although despite playing better, I don’t think he will get back into the Top 10 this season. Famous last words maybe, and can I add, I hope he proves me wrong.

But this is Jackpot, twice world champion coming back into form after a bad few days in the office in 2017 and you simply do not become a bad player overnight. By the same token, you don’t become a top player overnight either, and Adrian is not likely to push the Top 10 for a while yet in terms of the official rankings, but I don’t see more than six or seven players who on form, when playing him on form, would be expected to beat him. As I said, it takes time to repair the kind of damage his career sustained last year, but if anybody can do it, Adrian Lewis can, and the signs have been positive. But, not quite positive enough for his fans, yet. Still one of the best ten, on form.

Whitlock fell away a bit in the Premier League and at risk of getting repetitive, I will make the point I made about Youtube, and which faces I see when I do a general search, and he has not been one of them, so much. The Wizard seems to have been a bit quiet of late so most darts fans would probably not put him in their top ten on current form. But I am taking this over the season as a whole, rather than over the last week or so, and I think his decent showing in the Premier League and his steady (albeit not amazing) performances in other tournaments merits this final spot. It is just my opinion, after all.

You will notice I find no place for James Wade, Ian White, Gerwyn Price and young van den Bergh. Not quite. But as each of them is a capable player, perhaps they can be in contention of featuring later on, if I write a sequel to this blog after a few more majors have come and gone. And as I have said before, if we had Glenn Durrant in the PDC, I think he would have a chance of inclusion, after a season or so.

BetVictor World Matchplay Draw – What Are Your Top Picks For Round 1?