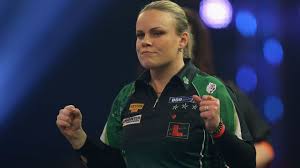 The Russian name Anastassiya shortens to Nastya for friends, and is pronounced like the word ‘nastier’ in English, which raises a smile when you consider our very own Nastya is just about the nicest person in the game.

So how do we feel about Nastya and how she did this week?

Disappointed with the result, but proud. No disrespect to Ryan Joyce of course.

Darts is a great sport, not just for the spectacle, the fun, the colour and the simplicty of a game which still manages to be about the most exciting there is, but also for the fact that there is so much less partisanry, rivalry, squabbling.

We may have a favourite player and want that player to beat any other. There are even those we may prefer to lose, if we’re being honest.

But above all what darts fans is to see quality play. That Player A beats Player B is an inevitable result of any match, but when has there ever been any trouble over it? Are opposing players’ fans segregated with some required to stay inside the venue while the other lot leaves?

Darts is a sport which has very few negatives. We have an openly gay referee – and respect to Huw for this – players from countless countries competing on an equal footing and many such representatives doing very well in the game too.

So that there were two female players invited to take part at the Palace does the PDC and the fans credit, the latter for their positivity about it.

And the reaction to each girl’s gritty performance shows how we as darts fans appreciate the efforts of any good player.

Anastassiya (or if you prefer, Anastasia) was brilliant last night. It is hardly the point that she lost, we have seen a lot of good players lose this week, Wright and van Barneveld among them. What really counts is that the sport we show the world comes across as something that everybody can enjoy and do well at.

For the future of darts, there could hardly be a more fitting contribution than that made by the Russian and of course Lisa Ashton, in that thousands of women, and men too, will now want to get into the sport at whatever level.

To win and become a champion is what many dream of when they throw their first darts. But not everybody can do this at the top level, naturally.

I think that to become an inspiration to countless other people, some of whom may go on to be that next superstar, can be worth as much as any trophy, sometimes.

So losing in Round One may not make Nastya happy in itself, but what she means to the game and the fans is an achievement that not many others will ever boast.

And let’s not forget, in English, Dobromyslova would mean, a person with kind thoughts.

Photo Courtesy of Sky SportsRussian translation courtesy of myself (honest)