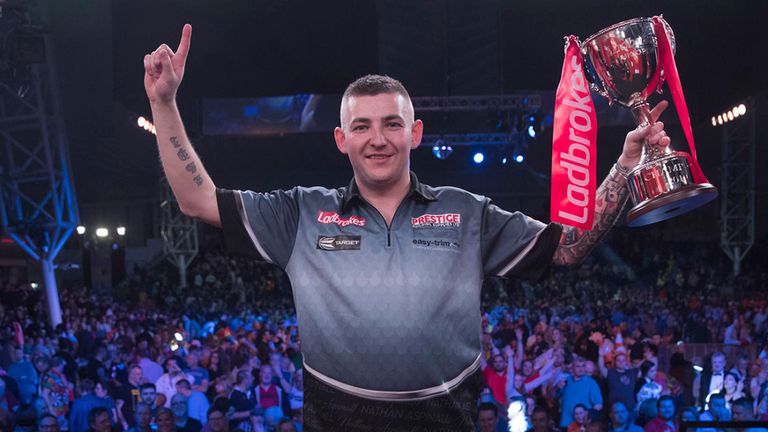 Nathan Aspinall – Cashing In On His New Found Success

Up until January this year, Stockport’s claim to world darting royalty was BDO stalwarts Tony O’Shea and Darryl Fitton. Fitton won the BDO World Trophy, and numerous other events, while O’Shea suffered Lakeside heartbreak in three World Championship finals. In the last few months however, they have been firmly unseated by an emerging force in Nathan Aspinall.

A semi-final berth in the William Hill World Championships at the back end of 2018 and start of 2019 was highly unexpected, but has kick started an avalanche of success. Although a former World Youth Championship finalist, and Development and Challenge Tour event winner, Aspinall was struggling to fulfil his early potential. The former accountant was also close to quitting the sport altogether, but came through the notoriously tough Q School in 2018 to breathe new life into his career.

He built slowly throughout the year, with two last 16 appearances in the floor events his best, until a breakthrough win in Barnsley in September, where he defeated Ryan Searle 6-4 in a Players Championship event, his maiden Ranking Title.

It’s a long way from floor to stage though, and Aspinall exited in the Players Championship finals at the last 32 stage in November, a 6-4 defeat to James Wade in Minehead.

It was at Alexandra Palace where the Lancashire thrower really showed his true potential. His run to the last four of the World Championship was sublime. A routine 3 sets to 0 victory in round one over Geert Nantjes settled any nerves. But he really emerged into the big time with an impressive 3-2 win over Gerwyn Price, who had just one month before captured the Grand Slam of Darts. Aspinall proved he was no flash in the pan, and he continued his march with a 4-1 win against Kyle Anderson. The last 16 saw him edge out another surprise package in South African Devon Peterson, and his route to the semi-final was complete when he routed Brendan Dolan, who enjoyed a timely return to form, 5-1. Many expected Aspinall’s opponent in the last four to steamroller him. Nathan was gallant in a 6-3 defeat to Michael Smith, and received a much needed £100,000 boost, to rocket him up the Order of Merit.

Aspinall has proved this performance wasn’t a one off and then some in 2019. He reached a quarter final and semi-final of PC’s 4 and 6, including a thumping 6-1 win against main man, Michael van Gerwen along the way at PC4 in Wigan.

He has now reached the pinnacle. After a call up to become a “Contender” which will see him take part in the Premier League in Nottingham following Gary Anderson’s withdrawal, he will be announced there as the reigning Ladbrokes UK Open Champion.

Toni Alcinas, Christian Kist, Madars Razma, Steve Lennon, Ross Smith and Gerwyn Price were all defeated in Minehead, before Aspinall won a magical maiden major with an 11-5 victory over 2018 World Champion, Rob Cross, sealing the deal with an almost barely believeable 170 finish. He trousered another £100,000 cheque, which now sees him gate crash the top 16, and also the long established Status Quo. Messrs van Gerwen, Anderson and Cross need to be aware, as “The Asp” looks here to stay.

As the lyrics from his walk on song sum up, coming out of his cage, and he’s doing just fine.