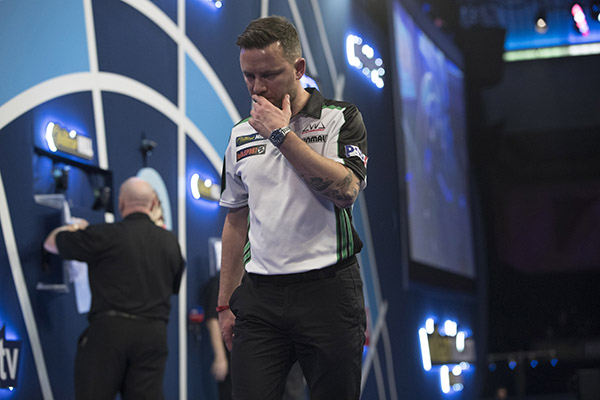 Paul Nicholson has lost his tour card and will not feature on the PDC Pro Tour next year if he doesn’t go to Qualifying School in January while South Africa’s Devon Petersen will keep his after a valiant effort at Alexandra Palace.

Nicholson endured a first round exit at the William Hill World Darts Championship at the hands of Kevin Burness and courtesy of Luke Humphries defeating world youth champion Dimitri van den Bergh, the Australian fell outside the indispensable top 64 on the PDC’s Order of Merit.

According to reports, Nicholson stated earlier in the year that he would not attend Qualifying School if he was to loose his tour card and focus on providing commentary for the likes of talkSPORT and ITV Sport.

As for Petersen, his will resume his career on the Pro Tour after pulling off surprise victories over Ian White and Steve West to reach the fourth round at Alexandra Palace. He’ll face an in-form Nathan Aspinall on Friday afternoon for a spot in the last eight in London.

Peter Jacques, Kevin Painter and Andrew Gilding are already amongst the many to loose their tour card and will head to Wigan in next month if they are to regain the all-important ‘golden ticket’.

European Qualifying School will take place just two days after the conclusion of the World Darts Championship in Hildesheim, with the likes of Darius Labanauskas likely to be in attendance, while the UK edition of Q School will go ahead two weeks later on January 17 in Wigan.